I Want To Make Comic Inspired Coords Too!

Lately I've been seeing a ton of really adorable Avengers coordinates out there, and while I loved the heck out of this movie and ended up seeing it twice (Apparently everyone else wants to see it as much as I do, because when I saw it last week, the theater was just as crowded as when I saw it the day after it came out! I feel like I am going to have to make it a 3rd time if I want to experience this movie from someplace better than the second row!), I feel like I can't really ever see myself wearing a red-white-and-blue coordinate, especially not a purple-brown-and-green one! So I got to thinking, what's a comic that, stylewise, is a little more my speed? The Sandman, of course! While not exactly a traditional superhero comic and there probably aren't going to be any movies based on the series anytime soon, it's still one of my favorite series out there. And heck, The Sandman had a huge effect on the fashion choices of many Goths for the last 20+ years, so it's no small stretch to be able to make some of the styles work for Gothic Lolita too!

I chose to just do a few coordinates inspired by a few members of the Endless (and gang) because, well, if you're familiar with the comic, you'll know that at least one member of the Endless is very... minimalistic when it comes to clothing choices. 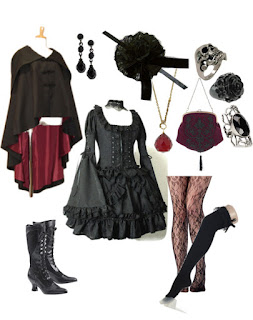 This one was actually pretty difficult to put together! If mostly for the fact that Morpheus isn't always the most fashion-forward guy out there. But, I tried to put together something that I thought would be appropriate, so I chose a very formal looking OP, and a cape lined in red (because most Lolita capes don't exactly come in flame-print, thank goodness). A red gem necklace and a pouch-like purse are a nod to Morpheus' iconic ruby and sand pouch, but I was hard pressed to find a Lolita appropriate gas-mask.
Death 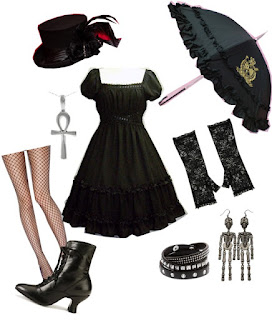 This one was really fun to put together! And it's definitely something I would love to wear. I started with a light and breezy OP, for a little bit more of a casual look, and added some iconic 80's Goth accessories, and topped it off with a top hat I think Death herself would enjoy, as well as a black parasol. While ankhs are pretty much never seen in Lolita, it's sort of impossible to make a Death themed coordinate that doesn't feature one!
Desire 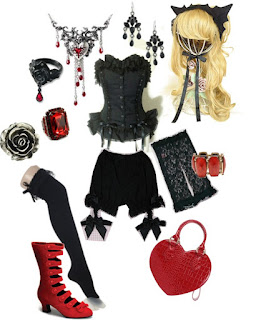 I actually spent a bit of time trying to decide if I wanted to make this particular outfit boystyle or not, but then I decided to go with the slightly more obvious choice of making an Erololi coordinate. I sort of compromised with the boystyle and went with a bloomers-based Ero coordinate, which is not really something people tend to wear in real life when they wear Ero, as it looks too much like you just forgot to put your dress on in the morning, but I think it's very appropriate for Desire.
Destiny 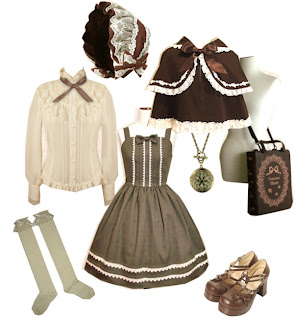 I actually thought this set was going to be a piece of cake, because I thought it would be easy to find a brown hooded Lolita capelet! I sort of just assumed that Classic brands release them all the time, but apparently not. I spent forever hunting down this one! I figured a Destiny inspired coordinate would be very fussy, old school, and stick very strictly to the "rules". For an even more Destiny appropriate coordinate, I'd probably replace the long strap on the book purse with a chain strap! 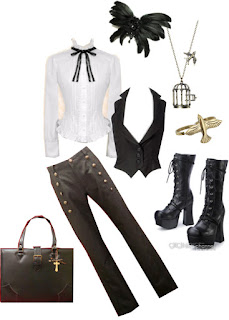 Okay, so this isn't one of the Endless, but I sort of wanted to do a raven-themed boystyle coordinate! While not exactly something you would see the character that Matthew was on would wear, it's sort of more of an "all of Morpheus' ravens, in general" coordinate. Honestly, I think this is more of a Lucian styled coordinate, but he's not a raven any more, but a librarian. If you haven't read the series, does any of this make any sense to you XD? I'm guessing it doesn't. 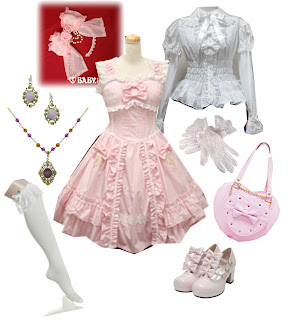 This post needs a little bit more pink! And who's the pinkest (okay, so really it's more of a purple...) character in The Sandman? Probably Princess Barbara, dream self of a very multifaceted woman named Barbie. I've paired up some fit-for-a-princess pieces, including a JSK with a corset-like waist, with a big gem pendant that could make a pretty good Porpentine.

I could have done a few more coordinates, as there are just tons and tons of characters in the Sandman, many of them fabulously dressed (like that foppish rabbit-headed vampire or Wanda), but I chose to pick a few favorite characters instead.

Marvel mainstream, DC imprint, and anything in between, do you have any comic book characters you have found yourself particularly inspired to lolify? Like I mentioned, I really loved seeing a lot of the Avengers coordinates online and I'd love to see anything else comic book related people have come up with!
Posted by caro-chan