I was lurking around on Hello Lace, a Lolita fashion database, the other day and stumbled across something from 2002 in the Baby the Stars Shine Bright section that took me for surprise! 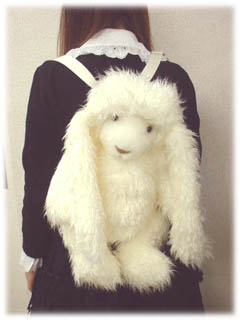 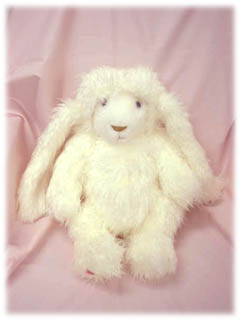 This might not be too surprising at first, as brands have released weird fuzzy animal bags in the past, but what surprised me about this was that it was labeled as an Usakumya bag! That's right, this weird little sheepy monster, that someone on Tumblr noticed an unfortunate similarly to the Nina chimera from Full Metal Alchemist that I have been unable to unsee, was the grand-bear to the iconic Usakumya bags! Someone else mentioned seeing this particularly fluffy Usakumya in the Kamikaze Girls movie, but I haven't seen the movie in so long, I don't recall exactly where in the background this fluffy little creature is lurking. 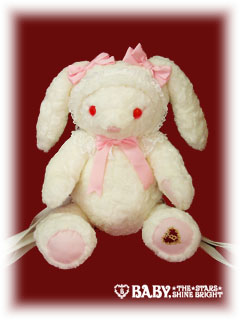 The current Usakumya!.
It would seem there are a lot of Usakumya's lurking around! I'm sure some of you are still having haunting dreams of this particularly terrified looking knock-off. Even the BtSSB versions have a few sort of odd looking bunny-bear's lurking around. Take, for instance, this 2005 version that seems to be a combination of the old fluffy one and the newer ones, or the many odd things Baby has put Usakumya's likeness on, including this most unfortunate pen.

Over the years, I've sort of grown fond of this little chameleon of a bunny-bear, and with each new, and sometimes nightmarish, thing Baby slaps this little guy's fluffy stuffed head on, the more I sort of want one of my own. Maybe I need to get a little jar (covered in fake fur with a fluffy bunny-bear head on it? Hint hint, Baby!) and start an Usakumya fund!

What about the rest of you? Is there anything in the history of Usakumya's that you just find yourself not being able to resist? Or are you just not into these fluffy little bears in disguise?
Posted by caro-chan