Petticoat Woes, And Why I Don't Have Them

If there is one question that is guaranteed to stump me, it is "How to I fix a deflated petticoat?" I simply don't know, because I can honestly say I've never had to deal with a deflated petticoat, or the hassle of wearing 3 or 4 pettis to get extra poof, nor do I have any opinion in the great debate over hanging a petticoat upside down or storing it in a special bag. Why have I never had to bother with this? Because I have never really worn anything other than a chiffon petticoat, and they simply don't deflate. Pretty much ever.

A petticoat is a staple of any Lolita wardrobe, and is sometimes the only piece of clothing separating a coordinate from the dreary and unfluffy world of not-Lolita (the horror!). So why be cheap about it? Besides, if you're going to have to wear 3 pettis at once, not to mention have to constantly buy new ones because the tulle ones just never hold up for very long, you're going to end up spending more on tulle petticoats than you would on one chiffon. As a wearer of chiffon petticoats I can say with confidence that they last. I wear mine on a near daily basis and just chuck it in the washer on gentle and it's still just as fluffy as the day I bought it.


Where can you buy these miracle petticoats?
The easiest place to get a hold of them is from Candy Violet. The one I own is the "fluffy petticoat" which is the fluffiest one, the "lace petticoat" is a slightly less fluffy version with lace on the trim. The petticoats sold on Candy Violet are not actually part of her own line of clothing, the secret behind them is that they are simply Malco Modes petticoats, which is a square dance company. The "fluffy" is Malco Modes 582, and the "lace" is 580. If you're thinking of being clever and cutting out the middle man (or rather, lady) and just go straight to the source, good luck with that! You actually aren't going to find these significantly cheaper anywhere else. Although if you have a square dancing shop in your local area you can probably luck out and find the exact same petticoat there and not have to pay shipping. 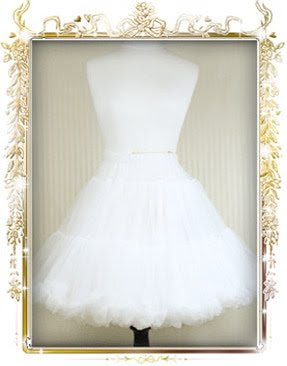 I hear you have to modify these petticoats to make them work?

It really depends. The one I have at least was a little long, about 21 inches, which is exactly as long as many of my skirts, so it was bound to peek out, especially when I sit down. For the first few weeks of wearing I simply rolled the waistband a couple times to get it shorter. But, the waistband is actually adjustable for different lengths. The elastic has a button on it so you can unbutton it and slide it out of the petticoat, and there are actually a number of lines of stitching going along the top that means you can slip the elastic through these channels and make it as long or as short as you need. It only takes about 5 minutes to do this quick mod and it makes a world of difference.


$60 is still expensive! I don't want to deal with tulle, but I don't want to spend a ton. What can I do?
Okay, okay, so if you want to cut corners you can. But, you get what you pay for and it's not as good as the Malco Modes pettis. Sock Dreams sells a Leg Avenue Layered Tulle Petticoat for $35 that is similar to a chiffon petticoat. While not as good as the Malco Mode version it is still typically fluffier than tulle petticoats as well as the fact that it stays fluffy no matter what. As I said though, it is not perfect. First of all, it's short! At about 16 inches long there are a number of bare inches between the end of your petticoat and the hem of your skirt, so if you wear it with a skirt with thin fabric it's going to drape very strangely. The best way to deal with this is to wear an underskirt between the petti and your real skirt. This is going to weigh down a bit on the petti and even out the shape, in most cases making the gap completely unnoticeable. The other downside to the Sock Dreams version is that it is scratchy, so you better plan to wear some bloomers with it, or it's going to be annoying you all day. I have found that my black one was, for some reason, a lot less scratchy than my white one though.


So, there you go, why I have no idea what people are talking about when they discuss how to breathe some life back into deflated petticoats. What about the rest of you? What kind of petticoats do you wear? And what do you do when a petticoat gets deflated?

A little petticoat update: In terms of looking for a good chiffon petticoat on the cheap, since writing this article a very good source has popped up! Victoriangirldress on Ebay sells chiffon petticoats in a rainbow of colors for about $24 shipped. But there is a catch: they are only sold in children's sizes, but most could get away with wearing the largest size available (listed as for 13-16 year olds). While I haven't yet had the chance to get my hands on one of these pettis, I have heard from many people that they are indeed very good! Please keep in mind that I am only referring to the petticoats they sell not the dresses in the clothing section, despite how Lolita they may look, they are still children's fancy dress clothes, and unless you're incredibly petite (Pettis stretch quite a bit! Dresses, not so much) I wouldn't suggest trying to use them as a cheap dress source as well.
Posted by caro-chan