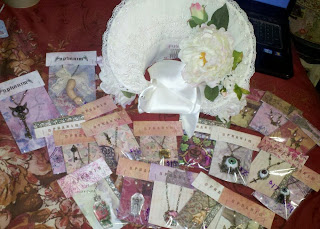 If you had a Lolita convention happen near you, what kind of events would you love to see? At anime conventions I am a huge fan of the, somewhat boring to most people, panels about the early years in the fandom and otaku culture, which I think extends to Lolita, as is pretty obvious from my interest in all things Old School Lolita, so these are the sorts of things I would love to see in a Lolita convention. I can imagine a panel about the early days of Lolita, including display pieces of the sorts of things Lolita brands released over a decade ago! Of course, I also am also a pretty enthusiastic shopper, so any sort of flea market, swap meet, or consignment I would be all over as well!
Posted by caro-chan