This recent post on WTF Burando had got me thinking about all the awesomely bad Lolita dresses that I love. Sometimes a Lolita dress is just so tacky that you can't help but love it! Some of these might not be strictly Lolita, but they've all appeared either a Lolita publication or in a Lolita shop.

Why it's awful- It looks like it's made completely out of organza, it's got great big bell sleeves that make her look like a big organza ball, her extra floofy bloomers seem to be sticking out a good 6 inches, and she has a very large and floppy bonnet, probably also made out of organza.
Why I love it- Metamorphose has made quite a few of these lace (or organza) monster dresses in the past, and when I first got into Lolita is when they first started making them, so for a time something like this was a big deal. I get all warm and fuzzy and nostalgic when I see something like this. I want it, to impress 17 year old me.

Why it's awful- Arm warmers, WTF is going on around her neck area, and inexplicable fringed bloomers that are practically pants.
Why I love it- I have no idea. It just looks like fun. And maybe because without the bloomers it would be pretty, but dammit, the bloomers are the best part! 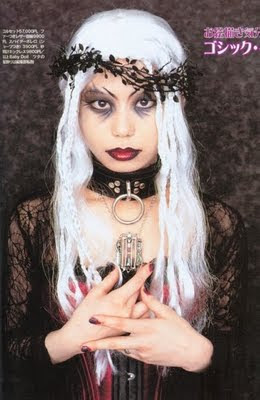 Why it's awful- It's old lady makeup.
Why I love it- But she's such a pretty old lady! 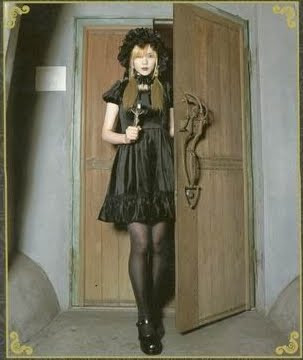 Why it's awful- It's super short, made out of what looks like stretch velvet, she's wearing sheer tights, and it's topped with a very infantile bonnet. It looks like a cheap western Goth decided to try Lolita after only hearing about it briefly.
Why I love it- Maybe it's because she's holding that crucifix, but it's just so uber-goth. It's so tacky 90's Goth that I just love it. 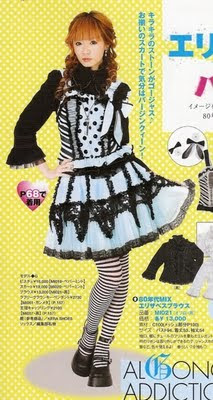 Why it's awful- It's a hot mess and it makes my eyes bleed just looking at it. It has stupid little peasant blouse half sleeves.
Why I love it- It's pink and black and just looks like a whole lot of fun! 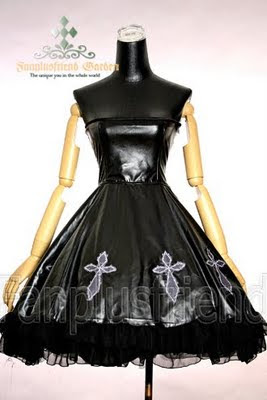 Why it's awful- It's made out of PVC, it's a tube top, and has cheap crosses along the bottom.
Why I love it- It looks like some of the super tacky stuff Mana used to wear, and I would have loved that. Plus, for some reason I've had the urge to get a PVC Lolita piece, if I did it would be something like this. 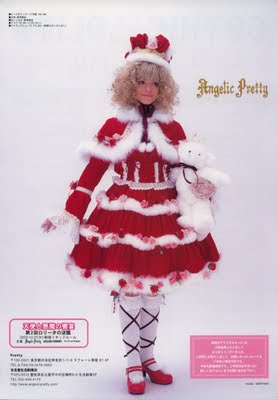 Why it's awful- She looks like Santa Clause.
Why I love it- I love Santa Clause!
Well, that's a few pieces off my awesomely bad dresses list! I've got a few more in mind but I've got to hunt down some scans. If you're interested in more Lolita of questionable taste, check out the LJ community, WTF Burando. What awful dresses would you like to have hiding in the back of your closet?
Posted by caro-chan