Boystyle is exactly what it sounds like, the boy's version of Lolita. Just like how the frilly dresses of Lolita isn't always a girls only game, Boystyle isn't just for boys. Boystyle has nearly as many different sub-styles as Lolita, and is often considered a completely separate fashion from Lolita. But Lolita's just love the Boystyle, we can't help it, it's just so cute. And because of that, I'll be going over some of the basics in this post.

Before I begin, I should point out that I'm not exactly a Boystyle expert, I haven't even worn pants outside of work since 2003, so maybe this should have been left to someone a little more in the know than I am. I do know quite a bit about it just from being part of the Lolita community for so long, but if I am totally off-the-wall incorrect about any of this, feel free to point it out to me.

What makes a Boystyle outfit
If you already have a full Lolita wardrobe, especially if you have a lot of Gothic Lolita pieces, all you really need to add to it to have a few Boystyle outfits on hand are a few pairs of proper pants and vests, and to make sure you have a pair of shoes to match. The best part about adding some Boystyle to your wardrobe is that you can find these things offbrand very easily, and cheaply! Most Lolita blouses will work beautifully with Boystyle.
The different styles of Boystyle
There are quite a few different sub-styles of Boystyle, and there is, as always, a lot of overlap, but I'll be going over the basics in this post. While Lolita's different sub-styles are often based on things like color schemes and motifs, Boystyle's sub-styles are usually based on things like pant length and general "age" of the outfit.

Boystyle Aristocrat is very similar to the female version of Aristocrat. It is a very Victorian Gothic style, nearly always done in black, with long jackets, frilly blouses, and minimal decoration. In Aristocrat, blouses are often high-necked, or with a pointed collar, and frequently are decorated with a jabot. Rounded Peter Pan collars are rarely ever seen in Aristocrat. Instead of the full skirts in the female version of the style, Boystyle Aristocrats tend to wear either straight legged formal men's pants, or those very wide legged pants that almost look like skirts. I have no idea what those pants are called. Sometimes the Aristocrat's pants are covered up entirely by a very long, almost priestly, jacket much like the one in this picture. 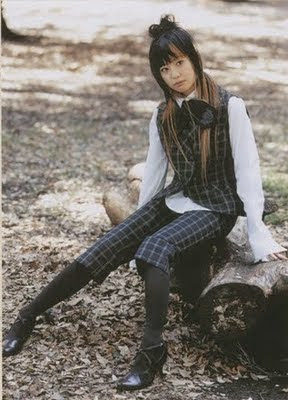 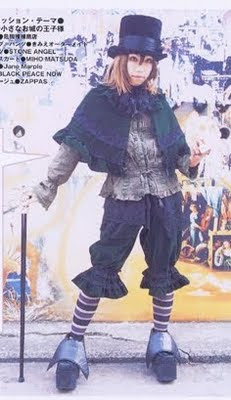 Dandy is a Boystyle that involves dressing like a little prince. I thiiiink this style is also called Ouijisama, I usually don't use the Japanese names for fashions, so don't quote me on that! Short pants, tights, a pair of clunky shoes (usually not boots), and a vest worn over a frilly blouse (leave the jacket at home) are the Dandy basics. Dandy tends to be a little more frilly or decorated than Aristocrat. Peter Pan collars are okay, big floppy bows usually replace jabots, but sometimes those rounded Lolita ties are seen instead. Pants are often just above the knee, or just below the knee. They are usually either a pair of puffy knickerbockers or a pair with a cuff. 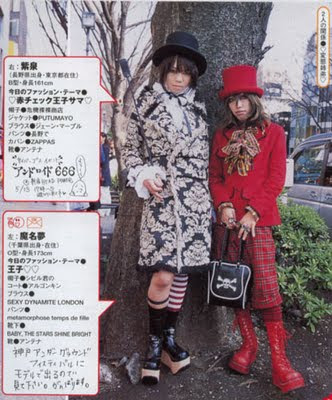 Kodona is the most childish of the Boystyles. It is very similar to Dandy, in that it is much fancier than Aristocrat and uses shorter pants, but, as you can see, it's very child-like. Mismatched socks, suspenders, loud prints and colors are what sets Kodona apart from Dandy. Boots are also seen with this style much more than in Dandy, often the mid-calf boot.

While these three tend to be the main sub-styles of Boystyle, there are a few different looks to Boystyle. While on their own, something like Punk or Gothic isn't necessarily Boystyle, it is a look that Boystyle can take on. These are, of course, Japanese versions of Punk and Gothic, which are quite different from their Western versions. 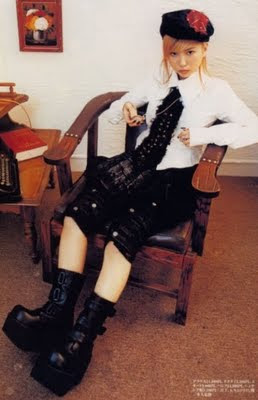 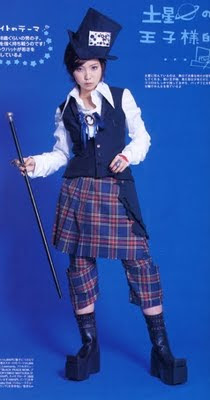 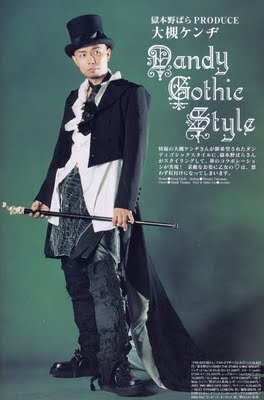 Things to avoid when putting together a Boystyle outfit

I think the most important thing to avoid while dressing Boystyle is to try not to look like a butler or like you're taking someone to prom. I know it sounds silly, but I've seen this happen several times. Men's formal wear does not Boystyle make. Sometimes the line is a blurry one, especially with the more Aristocratic styles. It's really all in the details, a funky shaped toe to your shoes, a Victorian cut to your jacket, a big floppy tie, raw edges on your shirt, these things will all help you look like you're not just there to take people's coats. If you honestly don't think you can pull off a look that doesn't make people want to call you Jeeves, stick with the more childish or punk sub-styles of Boystyle.

On the other hand, you don't want to look you just came out of a Visual Kei bondage themed music video. Jrock cosplay does not Boystyle make either.

Another thing to watch out for when wearing Boystyle are lengths. Boystyle has a lot of odd lengths (long jackets, short pants, long socks, tall boots) and you can end up looking very unbalanced if you just throw on a random assortment of pieces. There really aren't any strict rules about lengths, and it usually takes some trial and error to find out what looks best on you. But there are a few things I would avoid, such as wearing pants that stop just above the knee with boots or socks that end just below the knee, matching very short pants with knee socks, wearing a jacket that's much longer than your pants, or having the top of your boots stop somewhere under your short pants. Basically, you don't want to leave large patches of skin uncovered, awkward little slivers of skin, or too much overlapping, simply because these things tend to look awkward.

Boystyle Inspiration
If you're looking for some Boystyle inspiration, check out the LJ community Teddyboys, or the blog Prince Des Enfers!
Posted by caro-chan