There are many motifs that brands like use over and over again, and many times you will easily notice that certain motifs will be used by multiple brands, often all at once it seems. Recently, a couple brands, namely Angelic Pretty and Mary Magdalene, have revisited the theme of perfume bottles for their new prints. 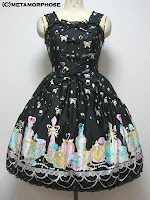 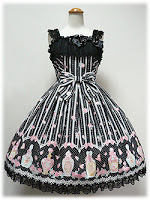 Left: Metamorphose, Perfume Bottle. Right: Angelic Pretty, Rose Toilette
While this theme is nowhere near as popular as something like rabbits or toys or some other ridiculously cute thing, there have been a few stunning pieces in the past to feature perfume bottles. Not only the sought-after Rose Toilette from Angelic Pretty (a personal favorite of mine), but even Metamorphose has released a punchy version of this classy motif. 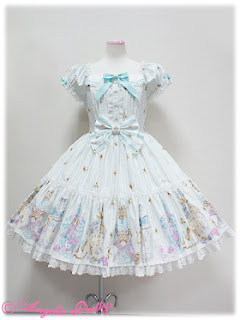 Angelic Pretty's blobby pale pastel Pale Blobs of Pastels.
With this new wave of perfume bottles, we have a bit of the old, and a bit of the new! The old comes in the form of Angelic Pretty re-using this theme, this time a bit more cutesy. The print on this new Angelic Pretty perfume bottle dress (named Glass Bottle of Tears, oddly enough) is, I think, both a bit hit and a bit miss. I think that the perfume bottles themselves are gorgeously illustrated but I can't find a single colorway of this print that actually looks good. The pastel versions just sort of look like a bland blob from a few feet away, and the black version looks sort of ridiculous. I think it's the stripes in the background that I am just not a fan of. While they are my favorite part of Rose Toilette, which featured elegant and detailed stripes, that looked a bit like fancy Victorian wallpaper, Glass Bottle of Tears just looks like generic fill-tool stripes, and sort of remind me of the quick-fix striped background that are in a lot of Bodyline prints (who also have actually released a dress featuring perfume bottles as well!). 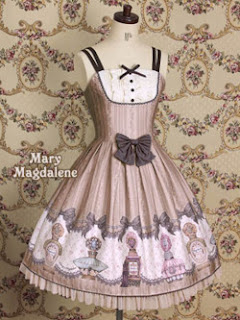 Mary Magdalen's Perfume Bottle print. When you've never released a print before, you don't have to think up a ridiculous name for it!
The new comes in the form of the Mary Magdalene dress, which, unless I'm mistaken, is the first time Mary Magdalene has used, not only a border print, but something other than a solid color or all-over floral. I think this ended up being a completely gorgeous dress! The print is so elegant and classy, and it completely suits Mary Magdalene's style. Now, when I first heard people talking about this dress, I have heard a few people complain that they feel like Mary Magdalene is, very belatedly, hopping on the print trend, and are acting like the next print from Mary Magdalene is going to feature pancakes shaped like bunnies riding on a rainbow made of ice cream. Honestly, I am pretty excited to see Mary Magdalene try something new! The results are obviously gorgeous, and completely fitting for the brand. 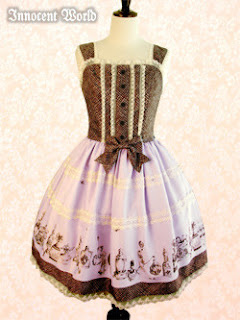 Innocent World's Antique Perfume Bottle.
The other perfume print to come out recently comes from Innocent World. I actually wasn't aware that Innocent World released a perfume print until I was writing this. And before I googled it, just to be sure, I was trying to imagine what a print of perfume bottles by Innocent World would look like, and I was pleasantly surprised to find out that what they released, looked a lot like what I imagined a print by them would look like! Innocent World's print features a relatively simple and understated print featuring some very elegant monochromatic vintage illustration styled perfume bottles, all lined up along the hem. All in all, it's a very cute dress!
There are very few of the major Lolita brands that haven't released a perfume print, so far as I know, I don't believe that Baby The Stars Shine Bright have released one to feature perfume bottles (although, they have made so many prints, I'm sure one of them includes a perfume bottle somewhere!). Moi Meme Moitie certainly hasn't, although, I can imagine if they did, it would be pretty awesome and feature coffin-shaped bottles filled with electric blue liquid, with some rosary beads and candelabras nestled amongst the bottles. Or, there's also a pretty good chance it might also look like a clip-art disaster.
Personally, I really enjoy seeing brands reuse themes again and again. I know some people might feel like themes get a bit stale after a while, but I feel like so long as brands are picking themes and motifs from a big enough selection of them, and not just doing cherries and rabbits over and over again, I think it's actually pretty fascinating to see how a brand will reuse the same theme, 6 years later, like in the case of Angelic Pretty and their perfume bottles, or how the same theme can look so vastly different when interpreted from one brand to the next!
Posted by caro-chan