You may recall that last autumn I updated with few of my favorite posts by other bloggers at the time. I've been thinking about doing it again, and so here we are! After all, if the sad state of my blog updates hasn't clued you in, I've been doing a lot more blog reading than I have been writing! 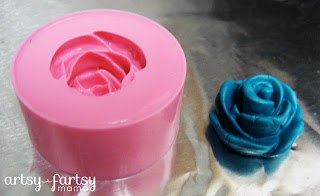 Photo from Artsy-Fartsy Mama
First up, a tutorial for using molds to make your own cabochons from Artsy-Fartsy Mama! As some of you might know, I pour a lot of my own resin pieces, and so the thought of making my own cabochons sounds like a pretty tedious task unless I happen to have a mold that can make many pieces, which is an incredibly expensive thing to ask for, and a still pretty expensive and also messy thing to make on my own, so I was pleasantly surprised to see that this tutorial used polymer clay! A much quicker, and less-messy alternative, and the pieces still looked amazing! Now, not everyone out there assembles their own jewelry pieces, so I though that this tutorial would be perfect for those that do a lot of deco work, as cabochon-heavy deco pieces tend to be pretty expensive to make, since cabochons can cost almost a dollar a piece. Which is no big deal if you only want one, but as anyone who's been bitten by the deco bug knows, one cabochon is never enough! You can pick up the mods she uses from Mold Muse, which look incredibly professional and are reasonably priced. After checking out her tutorial, I think I might pick up some molds from them this week!

Xelyna the Gothic Lolita has a very useful translation of Kera's June issue of Top 16 Fashion Keywords. It's basically just a pretty cool list of 16 trends for the month, and it's nice to see some things I'm already very interested in on there (Classic Lolita & teeth motifs!) as well as some things that I think sound pretty cool and I'd love to try out this summer (wearing all white & see-through gowns!). 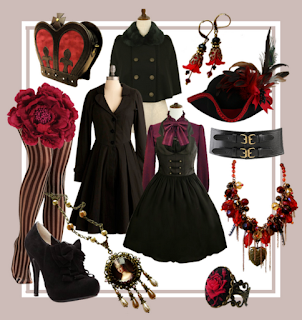 An amazing Gothic Lolita coordinate inspired by 1790's fashion and the French Revolution.
Calanthe's Nightingale is a pretty amazing Tumblr, and I actually just realized that she has some pretty awesome longer blog posts on there! Unfortunately, due to the "real time" nature of Tumblr, I just completely missed out on these when she posted them last year! But I gladly ate them up when I discovered them on her awesome Tumblr last week. Along with some other very interesting blog posts, she has a small series entitled The Historical Lolita, where she has some incredibly in-depths posts about making coordinates inspired by specific decades from the 1700's. I have to admit, I don't know enough about the 1700's to tell one decade from the next, so these were amazing to read and to get inspired by! You can check out her posts about 1760, 1770, 1780, and 1790 on her Tumblr. I know these are from a while ago, but I would definitely love to see her pick up this series again!

Over on The Everyday Goth, the ever-witty Mary Rose has been doing some wardrobe cleanup and spends a post musing about What Makes A Wardrobe Complete. It's not necessarily a post with tips and tricks for those of you looking for an answer to that question, but I found her commentary on a What Not To Wear book she found in her bookshelf hilarious and completely relevant to any one of us, Lolita or Goth, who are outside of the "mainstream" fashion scene. For those of you looking for an actual check-list for a Goth wardrobe, later in the week she followed up on that post with her own list of what she considers a complete Goth wardrobe. 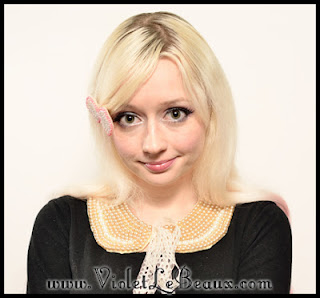 Violet LeBeaux modeling her pearl collar!
On Violet LeBeaux, my go-to blog for easy and fun tutorials and girly pink inspiration, she recently posted a tutorial for a cute retro style, but oh-so-trendy, beaded collar that is so much simpler than I ever thought one could be! I love the one that she is modelling above, because it looks so much like a vintage pearl collar that my grandma used to own! I think this easy tutorial could be applied to so many different styles of Lolita: a beaded pearl collar for Classic Lolitas, a pink deco'd collar for the Sweet Lolita, a black pearl & blue (or red!) cut-class bead collar for the Gothic Lolita, and even a studded one for any Punk Lolitas out there! I love the retro look of this collar, because I think that it could also easily be an accessory that can be worn outside of Lolita, or even in other fashions like Dolly Kei or Cult Party Kei.

There was a recent post on EGL, the LJ-based hub for Lolitas worldwide, about wearing Lolita in "inappropriate" places, such as donning the frills for jury duty! It was just a post where people chimed in and told their stories about the least appropriate place they have worn Lolita, but it was such a fun read. It's things like this that remind a lot of us that Lolita is just your everyday fashion for a lot of people worldwide! 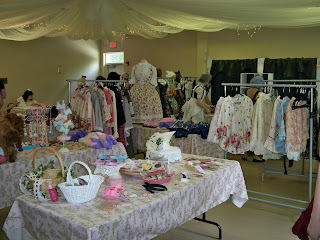 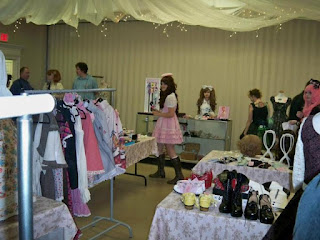 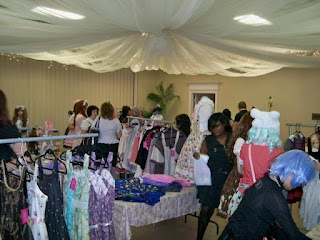 Some drool-worthy photos of the boutique at Frill, courtesy of Sonia from over at Lolibrary.
Finally, I want to talk, again a little bit about the Lolita convention that recently happened, Frill! Despite the fact that I couldn't make it this year, the whole weekend it was happening, I was so excited for everyone who got to go XD I was refreshing Tumblr and EGL a lot more than usual that weekend, hoping people would post some quick snaps of it. Thankfully, the blog posts and photos have finally started rolling in from it! I am overjoyed to learn that almost everyone who went counted it as a complete and total success! I am also excited to hear that, hopefully, next year's Frill plans to be in a bigger and better location. All the reports I've heard have said that there were between 150 and 200 attendees, which is a pretty massive amount of Lolitas to all gather in one place! The above photos are of the boutique, and taken by Sonia of Lolibrary, but if you want a little bit longer of a post, you can check out Inside Elegy's huge post about her experience at the con!

I am so excited to hear that Frill was a success, because something like this, a massive gathering that was organized by and for Lolitas, in their very own convention setting, is really a huge step for Lolitas in the US! Even though Frill was a very long ways away from me, next year, I'm sort of determined to make it in person.
Posted by caro-chan