4 Responses to "What Are You Wearing?!"

Those who wear Lolita are all too familiar with the question "What are you wearing?!" Sometimes it seems like you can't take more than a few steps in public while wearing Lolita without someone asking this question! Unfortunately, sometimes answering it with "It's Lolita fashion!" leaves people with even more questions than before! So what's a Lolita to do when she's asked this sometimes tricky question? Personally I have a few different responses to it, depending on how it's being asked. 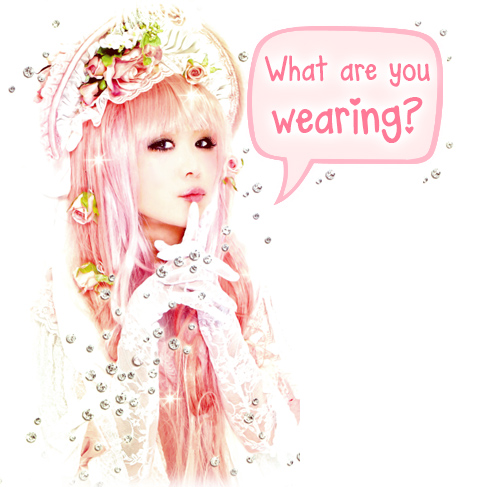 "It's from [insert brand/shop here]!"
This is my go-to answer to this question because it doesn't involve any followup questions beyond possibly someone asking where to buy it for themselves, which is generally easily answered with "The internet!". I usually use this response when someone is specifically asking about the clothes, rather than the general style. Personally I notice a lot of older women being interested in the fashion this way, they're generally excited about the lace, or some sort of details, or the fact I'm wearing a petticoat. Although I will also use this response with someone about my age or younger, as there is a good chance they recognize it as Lolita fashion already and will probably even recognize the brand name.


"It's a street fashion from Japan!"
This is the classic "describing Lolita without saying Lolita" description of the fashion. Mostly this type of response is reserved for people who are asking about the general style, like the sort of questions you get when you're out with other friends who are also wearing Lolita. The downside to this response is it usually has a lot of follow up questions! Particularly because of the addition of "from Japan" usually makes people curious about why someone is wearing something from Japan, so far away from Japan!


"It's a retro/vintage/Victorian inspired fashion"
This response is similar to the above, except it neglects to mention Japan, which often leads to less follow up questions. I would save a response like this for someone who wants to know what the general style is called, seems honestly interested, but you don't want to make a particularly long conversation about it.


"Oh, just regular clothes!"
I generally save this response for when I'm feeling particularly snippy, or don't have time to entertain stranger's questions. For example if I'm visibly in a hurry, or doing something, or talking to someone else and someone asks this without seeming to be genuinely curious. If I feel like they are demanding an explanation from me, rather than asking out of genuine interest they will get this response from me. It's kind of passive aggressive but it usually gets the point across that I don't feel the need to explain why I am dressed the way I am.

How do you respond to questions about Lolita fashion from strangers? Are you one of those brave souls who's ready and willing to patiently explain what Lolita fashion is to the curious, or is that a conversation you simply don't want to get into with strangers?
Posted by caro-chan