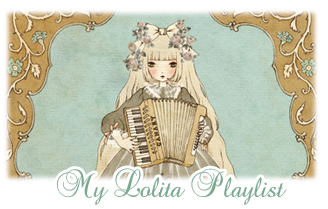 Art by Kira Imai
I haven't forgotten about the 30 day Lolita meme! I just took a break from it for a while, but I'd like to resume with day 8 (even though it's very much past 8 days!) with "10 songs that inspire you for Lolita" I've actually been meaning to make a real-life mix CD of Lolita songs for a long time now, but have never really gotten around to even making a play list on my computer until now. These aren't necessarily songs that seem to directly reference anything Lolita-like but are more like what I like to listen to when I am in the mood to lounge around in a frilly dress.


Rasputina- 1816, The Year Without A Summer. I am sure I have mentioned on this blog before that I'm a pretty big Rasputina fan, and I tend to like to associate them in my head with Lolita. This is a song off of one of their more recent albums about, you guessed it, 1816, also known as the year without a summer. Not necessarily Lolita, but the historical imagery, of a pretty gloomy nature at that, is fitting for my own ideal Lolita aesthetic.


Nine Inch Nails- The Perfect Drug. Okay, so maybe this song is on this playlist because the scenery is like my dream house and gardens and I have never been able to separate the song from the music video after seeing so long ago, I also like to pretend that this song is about vampires, which it probably isn't. Scary hedge mazes, vampires, mandolins, these things are Lolita to me.


Cinema Strange- Catacomb Kittens. Another band that I have mentioned on this blog before! Again, picked for it's gloomy lyrics that are reminiscent of times gone by. A song about orphans who run away to live in catacombs, definitely more on the Gothic side of the Lolita spectrum, but still very Lolita to me.


Tori Amos- Raspberry Swirl. Tori Amos is another musician that I have always just sort of put on when I am in a particularly Lolita mood, but no real one song in particular. I just so happen to like this one at the moment.


Sopor Aeternus- Hades Pluton. This is actually the first Sopor Aeternus song, which I actually heard when I was first starting to get into Lolita and trying to create (not always successful) coordinates with the goth clothes in my closet, so this particular song always sort of reminds me of that time in my Lolita timeline. Also, it's a great song, even if it took a little bit to grow on me, as I had honestly never heard anything like Sopor Aeternus before this song. I had absolutely no idea what to make of it!


Malice Mizer- Beast of Blood. Another song that I discovered when I was first getting into Lolita, so it instantly reminds me of the fashion. And how could it not? A Jrock song about vampires with Mana pretending to play a violin while twirling around in an Aristocrat dress, what's more Lolita than that?


Darren Hayes- Waking the Monster. A little different from some of the other songs on here, but really on here mostly because my friend Janet and I are both huge Savage Garden/Darren Hayes fans, and the soundtracks on the way to many a far away Lolita meetup has been Savage Garden. Plus, this song is about a mad professor building a time machine, that's sort of cool and fitting I think XD


Schwarz Stein- Release Me. I was never really big on Jrock, with the exception of the first summer I discovered it, which was the summer of 2003, and also the summer after I decided I wanted to be a Lolita for reals this time. So, the few Jrock songs I still listen to really make me feel all fuzzy and nostalgic inside towards Lolita.


Aqua- My Mamma Said. Aqua is such an ultra girly band, mostly known for Barbie Girl (quite possibly the girliest of all songs?), but they make a few really great songs along with all the goofy ones. This is one of their best I think. Not particularly Lolita, besides the fact that they are generally a girly band.
Posted by caro-chan