Taking Classic Lolita to the Next Level. Dare I say, OTT Classic?

When people hear "OTT Classic" there are a lot of mixed reactions, from "OMG that sounds awesome!" to "Impossible! There's no such thing". Personally, I feel that anything, with proper styling, can be made into a nicely put together over-the-top outfit, after all, OTT simply means that a style is a little more excessive than it usually is. To call a style of Lolita "Classic" we are simply implying a general aesthetic, one that typically is styled after elegant times gone by, not that there is some sort of cap to how many accessories you can wear. And after all, many fashions of the past are known for being very opulent and over-the-top in pretty much any sense of the term, so why should Classic Lolita simply mean "those plain Lolita dresses that sort of look like grandma's couch?" Just because Classic Lolita is generally thought of as the more "toned down" Lolita style that doesn't mean that there is a limit to how excessive the style can be, in fact, I think that because Classic Lolita is a bit more toned down that means that it doesn't take much to push it into the realm of over-the-top. 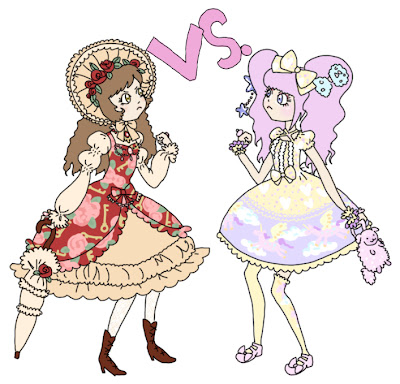 It might seem a bit of blasphemy to those that love the simplicity of Classic Lolita, but OTT Classic is a style that seems to have everything that OTT Sweet had that made it pretty much sit on top of the Lolita world for the past 4 years. So, what makes are some of the things that make OTT Sweet so beloved that can easily be applied to Classic Lolita?


So what makes a Classic Lolita coordinate OTT?
As I have mentioned, Classic Lolita is generally thought to be a much more toned down and refined Lolita style, so, personally, I feel that anything that is a bit fancier or more decorated than is usually seen in Classic Lolita could be called OTT Classic. This includes things like extra poofy skirts, excessive and opulent jewelry, purses shaped like fancy things, bold prints, extra layers (longer skirts worn under shorter skirts, boleros over blouses, jabots and wristcuffs added to blouses, etc), large bonnets, and non-cotton materials such as silks, chiffons, brocades, velvets, and gobelins. These are all things that, while they are undoubtedly a part of the Lolita fashion and aesthetic, are not often combined all at once in one coordinate, thus adding several of them to one outfit is usually enough to make it a bit more over-the-top than is normally seen in Classic Lolita
Much like with OTT Sweet, it is not just a matter of the dress alone making a coordinate, but rather how that dress is put together with other pieces and accessories. It is a combination of not just a prettily patterned dress, but the addition of accessories as well as hair and makeup styling. A dress with a Victorian wallpaper-esque print paired with a plain cream blouse, cream tights, a matching rectangle headdress and brown mary-janes is undoubtedly Classic Lolita, but pair that same dress with a chiffon blouse with billowing sleeves, a couple extra petticoats, a huge flower covered bonnet, lace tights, Victorian boots, a long lace underskirt, oodles of antiqued gold jewelry, and doll-like flawless makeup job and it just seems like the same dress has become something else completely, not necessarily something better, just something more extreme and definitely over-the-top in terms of elegance.
One of the Lolitas who I think is a perfect example of taking Classic Lolita to the next level is Steph from the blog Moar Lace Please. The following outfits are all from her blog, for more, definitely check out her blog!

Styles like this are also featured several times throughout various Gothic & Lolita Bibles, both in street snaps and photoshoots. Please excuse this very sparse sampling of examples from the Bibles! I have recently lost my folder full of every G&LB scan ever in a computer move and am still trying to get it back together!

A brief note about the phrase "OTT Classic"
I would like to add, one final time, that I am really just using the phrase "OTT Classic" to describe a style of Classic Lolita that is a little bit fancier and more decorated than Classic Lolita is usually perceived as being. If you think that these styles should only be called regular old Classic Lolita, that is fine. If you prefer to call them Neo-Rococo Phantasmagoria Opulent Antiquated Lolita, that is just fine too.
I'm not necessarily saying that every time a Classic Lolita dons a bonnet with a few extra roses clipped to it that she is being "OMG a totally over the top wacky princess just like those OTT Sweet Lolitas!" I do not necessarily believe that every deviation from the standard idea of Lolita needs a very specific sub-style name or that things that deviate from the Lolita norm and do not have a very specific community approved sub-style name are all the sudden new and strange and no loner Lolita, but I do believe that, as a blogger, it's a hell of a lot easier to use buzzwords and brief descriptive phrases to describe things. You probably wouldn't have made it this far into this post if, instead of saying "OTT Classic", I said "This style of Classic Lolita, that, while still considered Classic Lolita, has leaning towards poofier petticoats and more accessories than what most people consider Classic Lolita".
Lolita sub-style names shouldn't limit what can be worn in said sub-style, they just make it a heck of a lot easier to talk about the things we enjoy.
Posted by caro-chan