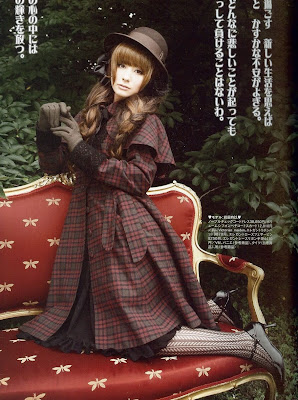 When you think of hats in the world of Lolita, you probably immediately think of mini hats, for better or for worse. But full-sized hats are also frequently worn with Lolita, they just don't get as much attention as their mini cousins. Many people tend to think that full-sized hats aren't worn with Lolita as some sort of unspoken rule, or that no one ever bothers too. But there are actually tons of different hats that you can wear with Lolita, and I'll be going over some of the good ones in this post, as well as some of the ones to avoid.
Hats that work very well with Lolita 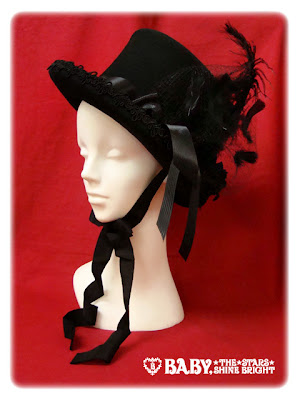 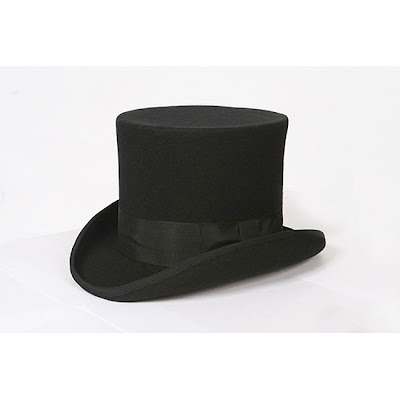 Top hats
The big brother of the infamous mini-top hat is, of course, the full sized top hat. You can find a plain men's top hat just about anywhere, from Ebay to the mall, or if you want something a little more unique you can find yourself a fancy one from Baby or from a hat maker on Etsy. Top hats tend to go best with Gothic Lolita or Boystyle. 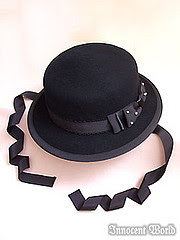 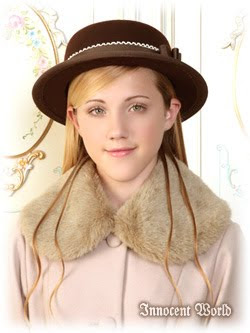 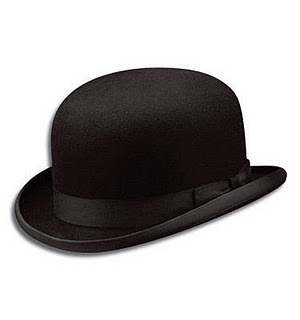 Bowler hats
Bowler hats are like a less formal top hat, they have a shorter, rounder top and the brim is often shorter and curled up a bit more than most top hats. They are also as easily found as the top hat in pretty much any store that would sell formal men's clothes, as well has being sold frequently by Innocent world. Bowler hats go well with both Gothic and Classic Lolita, the right one could even go nicely with Sweet Lolita, especially Sweet Lolita in black and white or a sweeter Kuro Lolita. 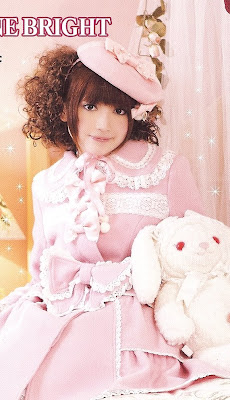 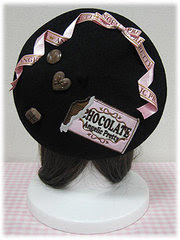 Berets
Berets are a cute choice and can be found just about anywhere during the Autumn and Winter months. You can often pick up cute pastel ones in the children's section. Angelic Pretty seems to be the big brand maker of berets, with Baby and Innocent World making a few of them every now and then. Despite the fact that brands tend to release Sweet styled berets more often than not, they go very well with just about any style of Lolita, provided the beret matches the rest of your coordinate. Metamorphose often even releases berets to match their Sailor Lolita styled dresses. Berets can also be the most casual type of hat, so they are perfect if you are planning a Casual Lolita coordinate that needs a hat, but you feel like a formal hat would be very out of place. 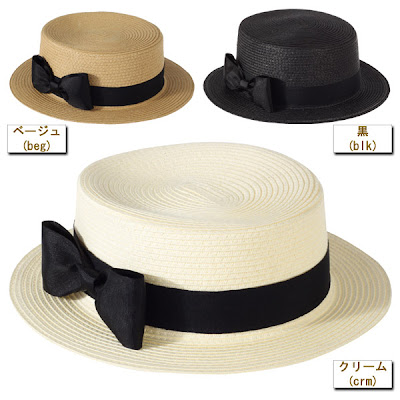 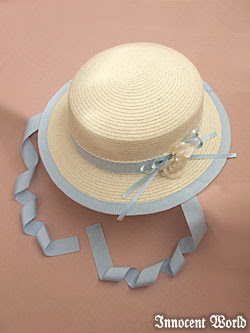 Boater hats
These have been around for ages, but over the summer they became very trendy in Japan and they were often seen coordinated in Lolita outfits. While Innocent World has released a couple, you can easily pick up Boater hats for an incredibly cheap price from Ebay or Bodyline. And if you want the real thing, you can usually find nice vintage ones in antique shops. Boater hats are also very versatile and can go with just about any style, depending on their color and how they are decorated, but the Lolita style it's most seen with is Classic Lolita 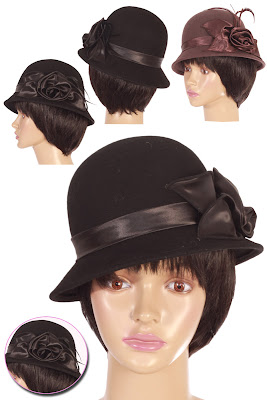 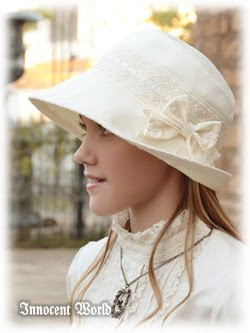 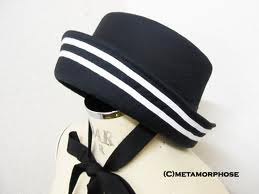 Vintage styled hats
These include a few different styles of hats, all of which have a vintage style, or are real vintage pieces. Innocent World, who seems to be the big hat maker in the world of Lolita, releases quite a few vintage styled hats, but so does Metamorphose on occasion when they release Sailor Lolita styled things. Vintage styled hats go well with just about any Lolita style, but are especially easy to coordinate with Gothic and Classic Lolita 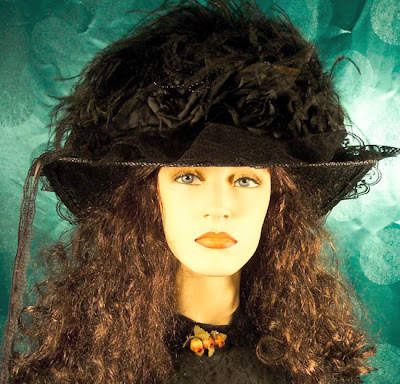 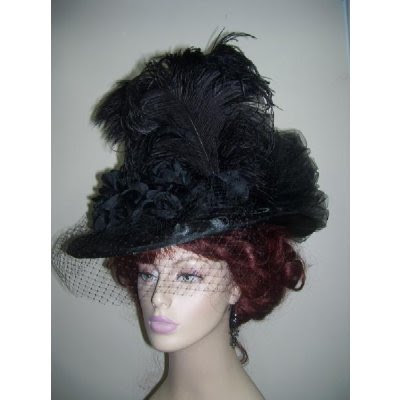 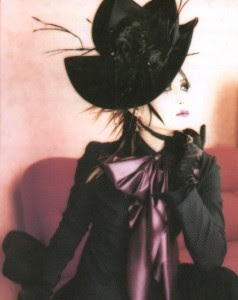 Victorian hats
A Victorian mourning hat is, without a doubt, the gothiest thing you could perch on your head. They're gigantic and black and covered just about anything you can imagine, from whole birds, to roses, to veils. While they are indeed Gothic, they are probably best worn only with just the right Gothic Lolita coordinate. While they might look strange with Kuro Lolita, they would go perfectly with a Gothic Lolita coordinate that is definitely on the gothier end of the Gothic to Lolita scale. If you want a Lolita brand Victorian hat, you're probably going to have to look to the indie brand Triple Fortune, but you would have an even easier time just buying from one of the internet's many Victorian wear shops.

How to fancy up your hat 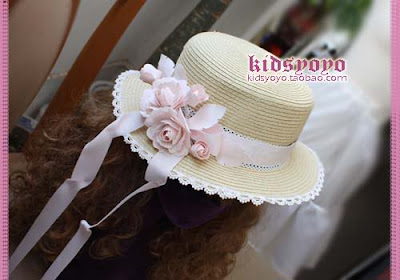 Of course, your hat is probably fine just the way it is, but maybe you have a craft itch that can only be scratched with a glue gun (ow!) and some decorations. If you want to add a little more frills to your hat there are lots of things you can do. This post on Paperlace has a lot of different ways you can decorate a hat, while a boater hat is used in the post, you could really decorate any hat you have! Decorations can be permanent with a little bit of hot glue and a needle and some thread, or you can use safety pins to make detachable decorations so one hat could go with many different coordinates.


Not all hats are created equal 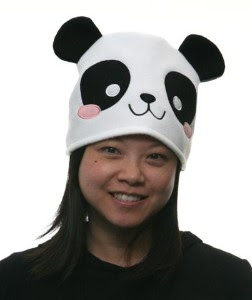 Now, just because it's hat shaped, that doesn't mean it belongs on your head. There are some hats that you really should avoid if you plan on wearing a Lolita coordinate. Of course, there are always exceptions to rules, but putting one of these on your head can, more often than not, can ruin a perfectly fine coordinate.
There are lots more hats that will both work with Lolita, and look completely silly with it, so do a bit of experimenting to find just the right hat that goes with your own personal style. The best part about hats with Lolita is that you can very easily lolify a hat, simply by sticking something cute and pretty into the hat band or changing the ribbon on it to match your coordinate.

What are your favorite styles of hat? Are you strictly a mini-hat type of person, or do you have a hat to match just about anything?
Posted by caro-chan