I've been neglecting to update news on newest brand releases, I'm not going to lie, mainly it's been because I had no idea how to navigate Baby's new site so I was pretty much the last to know about their new releases XD Well, I've figured that out now, but Caramea over at New Vogue Children still beat me to this one, but I'm still going to talk about it anyways because I'm simply in love with it. 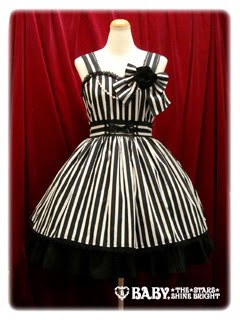 Kuranosuke Stripe is actually an Alice & the Pirates release, and it is awesome! I'm such a sucker for vertical stripes, and while many brands release prints with some sort of vertical stripe, maybe vertical columns of flowers, or polka-dot filled stripes with candy scattered around them, very few release simple 2 color stripes. The black and white stripes I especially love! Many Lolitas like to wear clothes that make them nostalgic towards their childhood with things like 80's pastels and unicorns, but my childhood memories consist of Beetlejuice, The Addams Family, and The Nightmare Before Christmas, so of course I'm going to get all warm and fuzzy inside when I see black and white stripes like this! 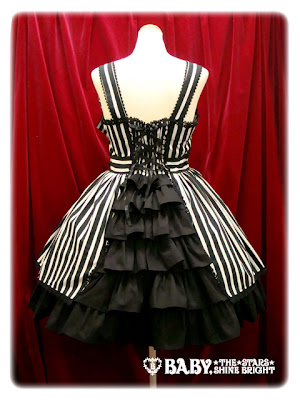 The one detail I'm not too fond of on this dress is the bustle. Don't get me wrong, I love a good bustle, but this bustle is just way too narrow for my tastes, and I much prefer a bustle like this when the fabric is the same as the rest of the dress.

Kuranosuke Stripe is currently up for reserve, and will be hitting shops and website come January. It's also paired up with a cute round headdress and a black blouse. The set is part of a collaboration with Kuragehime (or Jellyfish Princess), which is apparently a manga and new anime about a girl who loves jellyfish way too much and the fashionable crossdresser who saves them. 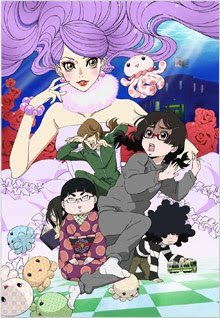 I'm actually a little bit excited about this anime now XD It's based on a josei manga, which is aimed at older teens and women, so (hopefully) there will be considerably less sparkles and pantie shots than your average anime with frilly dresses. 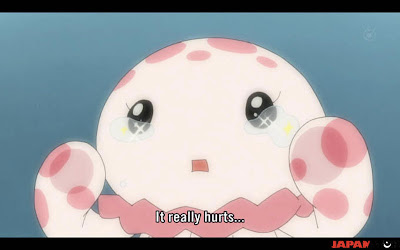 Or not...
The more I read about this anime, the more I sort of really want to watch it XD I think I'm off to go find it now!
Posted by caro-chan