You Got Your Gothic In My Lolita!

First up, the Lolita pieces to be introduced into the Gothic wardrobe. These are mostly very basic pieces.
A different head piece could have easily been picked out, maybe a round lacy corsage? But I think an extra fancy black Victorian styled bonnet is a perfect head piece for a very Gothicky Gothic Lolita. 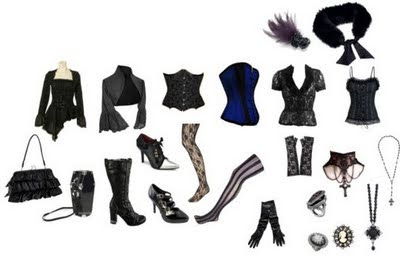 Next is the pre-existing Gothic wardrobe. Now, I'm talking Victorian Goth, Romatagoth, or maybe even something a bit Vampiric, something classical and elegant, not futuristic or nihilistic. These are all pieces that can easily be found in a full Gothic wardrobe, we've got:
This might seem like a lot of stuff, and I'm certainly not suggesting you rush out and buy this all, these are just all "typical" Goth pieces that a fleshed out wardrobe that has probably been added to for years would contain. Now, onward! to my silly named coordinates using both of these sets of clothes 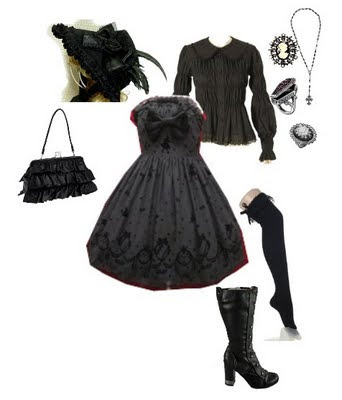 Yep, just plain ol' Gothic Lolita. Using nearly all of the Lolita pieces I've made a Gothic Lolita coordinate by only adding the boots and a few accessories such as a brooch, a long necklace, and some rings. For when you want to blend in with the other Lolitas! 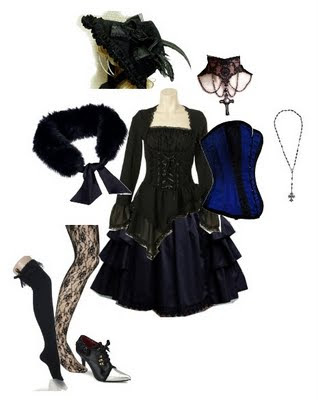 This is a rather over-the-top outfit that makes me think of a night spent at an opera, time to break out all your most extravagant pieces and wear them all at once. I completely forgot to add a purse, but either one would look fantastic.

The High Cost of Living 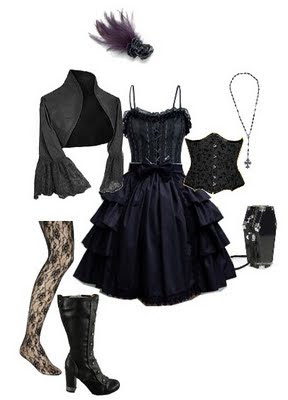 Tank tops in Goth have reminded me of Neil Gaiman's Death :P Even though this one is covered up with a bolero, it still reminds me of Death, I think it's the coffin purse and the long silver necklace. Maybe pair this coordinate with black umbrella? 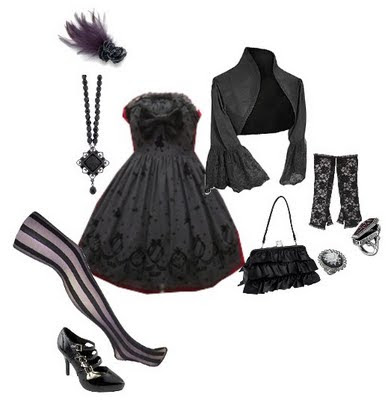 Maybe it's the look of that bolero's sleeves, combined with a blouseless JSK, but it reminds me of fancy 1700's dresses. Wear your hair up in lots of coifs and curls!
Memento Mori 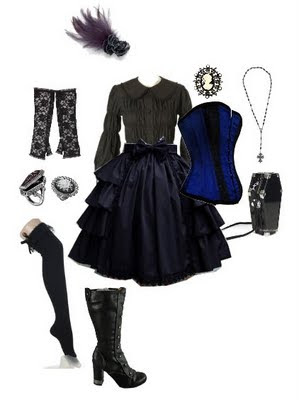 A traditional Lolita outfit fancied up a bit with a corset, a few Gothic accessories, and a pair of lacy gloves peeking out from under your cuffs. To me, combining a Peter Pan collard blouse with a corset has a very Gothic and Victorian look, but still remains very childish looking. Providing, I think, an interesting contrast.

Memoirs of a Transylvanian Concubine 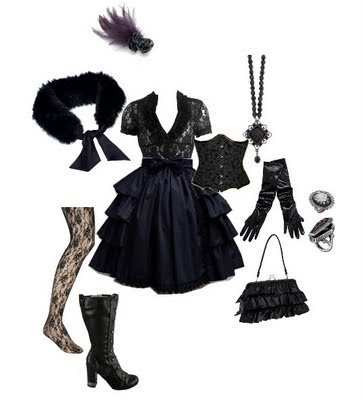 The sheer blouse, opera gloves, and boots make this coordinate a little bit Ero, don't forget to wear a cami under the blouse though! The corset is optional, I just can't help but want to add corsets over coordinates.

Our Lady Of The Broken Hearts 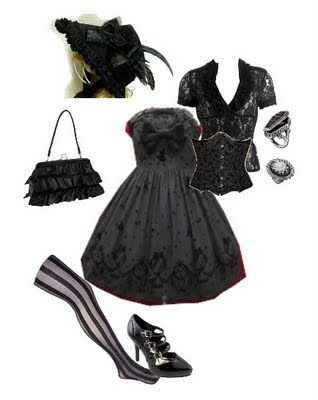 A simple Lolita coordinate with a corset over a JSK. I think that the addition of the big Victorian bonnet and the corset over the JSK, give the coordinate a very decadent look, without having to over accessorize.

Now, as I said, some of these coordinates might border a bit more on Gothic than Lolita, but I hope this has perhaps inspired some people not to be afraid to mix up their wardrobes a bit, and to think up creative ways to get a bit more wearability out of the beginnings of a Lolita wardrobe. Or, even if you don't have an epically full gothic wardrobe to start mixing in a bit with your Lolita wardrobe, maybe this post will inspire you to try something a little different with your next Gothic Lolita coordinate.
Posted by caro-chan