While browsing through some Gothic & Lolita Bibles I noticed that the earlier ones have much more white or off-white coordinates than any of the newer volumes. These pale colored coordinates have such an angelic and innocent aesthetic and it's definitely more elegant than the modern pastel rainbow Sweet Lolita, which tends to focus on cuteness as opposed to elegance. I really love this style of old school Sweet Lolita but it's hardly ever seen any more unless it's someone deliberately dressing in Shiro Lolita, and then the focus is more about dressing mainly in all white, not maintaining an angelic air. 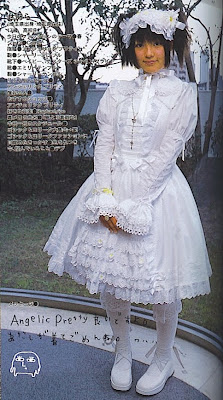 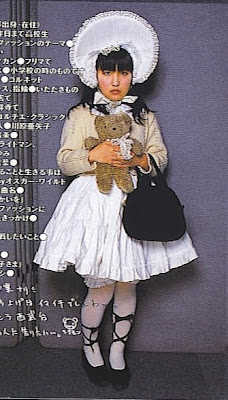 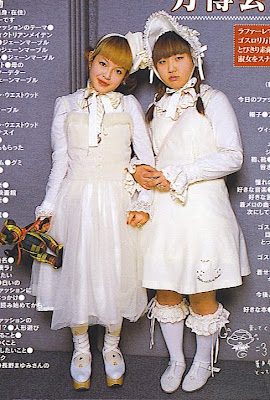 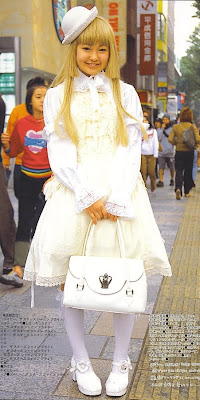 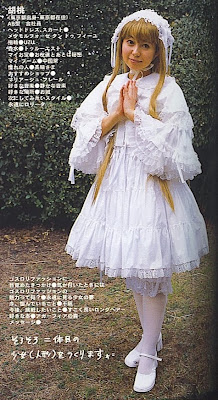 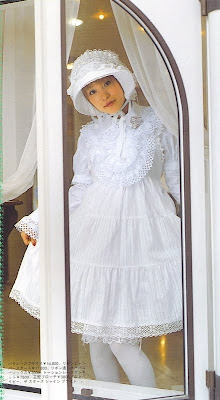 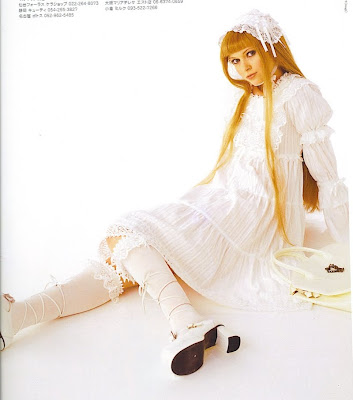 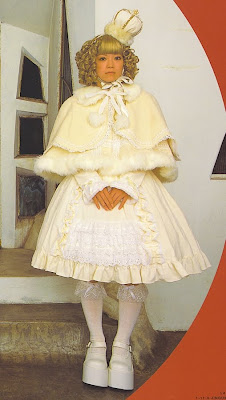 These are some of my favorites from the early volumes. One of the things I really love about some of these coordinates is that they are not afraid to combine off-white with white. White/off-white combos are often seen as an instant Lolita faux pas to some, but I think this is something of an unfair statement that people heard once and take a little too much to heart. True, if you are wearing a white dress and socks a pair of off-white shoes are going to look out of place, and a white blouse with off-white lace paired with a pink and white skirt is going to look strange, but that's not to say that all white and off-white combos should be written off. If you balance the two colors nicely, such as matching a white blouse and socks with an off-white JSK and socks, the result is lovely.

Another detail often seen in these early angelic Sweet Lolita coordinates are ruffly sleeves. Either wide, lace covered bell sleeves, or a long sleeve with a wide ruffle at the end. All in all the designs were much more detailed, lots of ruffles, lots of lace, and lots of bows and other sweet details. The ruffles didn't stop at the dress either! Socks had a lacy ruffle around the top, frilly bloomers peeked out from under skirts, and headdress were extra lacy or they even wore a decadent white bonnet. These old school angelic outfits were definitely over-the-top in their own way and could definitely hold their own against a modern OTT Sweet Lolita outfit.


Updating this old school style
This style is easily updated for the Lolita who loves the style, but wants a few more up-to-date details. The result, I think, ends up a little bit more Classic Lolita than Sweet Lolita, but then again, old school Sweet was often very similar to Classic Lolita. 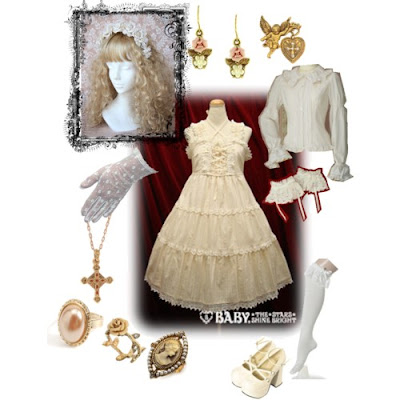 I've picked a BtSSB staple for the JSK, a pale cream colored empire waisted JSK and paired it with a white blouse with some wristcuffs for an extra lacy ruffle. To update the look a bit I switched the knee socks for a pair of over-the-knees and instead of an old school ruffly headdress I've picked one of Innocent World's rose covered headbands. To complete the look, and to further the angelic theme, I've added a few pieces of antique gold jewelry, a couple of which feature crosses and cherubs.

This is a gorgeous style, and while people still certainly do wear Shiro Lolita, I would really love to see more white coordinates with an elegant and angelic aesthetic to them. These old school sweet coordinates have a certain look to them that many modern Sweet Lolita coordinates just don't have, despite how OTT both are. What do you think? Would you like to see the next big Angelic Pretty piece be a lace covered dress like one of these, or do you prefer cute over elegant Sweet Lolita styles?
Posted by caro-chan