If you are unaware of what a bunny bear bag (aka usakumya) is, it's a stuffed animal styled purse released by BtSSB. It's rather hard to get a hold of and is usually very expensive when it does pop up for sale. Up until now the bunny bear has been left alone by the hoards of knock-off sellers, sure, Bodyline released a few generic stuffed animal totes, and Leg Avenue even released a knockoff of Innocent World's rabbit purse, but no one had ever released something that was obviously supposed to be a bunny bear knock-off. Well, until this:

This sad little creature is supposed to be a bunny bear bag. In case you don't recall what they look like, here's a picture of the original Baby, the Stars Shine Bright bunny bear bag: 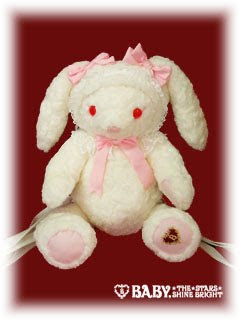 They look similar, they look very similar, but the knock-off looks very... well, off. I think it's the flat face and the tiny little red eyes placed on either side of the nose. Instead of looking charming and cute, it manages to look both terror stricken and forlorn. I almost feel bad for the poor knock-off bunny bear bag, like maybe a hug and a pat on it's strangely wide little head as well as a "There there, I know you're not brand, but you can still be cute," is all it needs.

I'm not just hating on this sad little squish faced bear simply because it's not brand. Not at all, if this was just some cheap knock-off you could pick up off of Bodyline for $10, I would be all over it, like I said, it's cute in a sad sort of way. What makes this knock-off so hilariously bad is that it's being sold for nearly $60. Yes, this little guy, who's quality is probably on par with something you would fish out of a claw machine in a Denny's lobby, is being sold for nearly as much as the original bunny bear. You can actually buy mini bunny bears for cheaper than this knock-off!

What do you think of this little guy? Is he sad enough to love? Cuter than the original? Or a will his beady little eyes be haunting your nightmares tonight? I'm also curious to know what people think of stuffed animal bags in general in the Lolita fashion. Personally, I can't really see myself using them very much, and I think they're useless if their compartment is so small that you have to carry a real purse with you, but I think they go really well with OTT Sweet outfits.
Posted by caro-chan