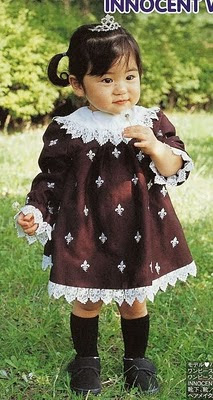 
How do you feel about younger lolitas coming to meetups? I'm thirteen, and most of the lolitas in my area are at least 18. From what I can tell, not many older lolitas like younger lolitas coming to their meetups. I wouldn't want to go to one without telling everyone, then it would be awkward. So, how do you feel about it? I mean, it's not like I'm going to be "DURR HURR HURR PENIS I AM TEENAGED DURR HURR."

Okay, so maybe you're not as young as that picture XD I just really wanted an excuse to use it since it's so cute! Younger Lolitas are certainly welcome at most meetups, but it honestly all depends on your specific meetup group. Get to know your local Lolitas first, and do let them know that you are younger than they are. Let them see, by interacting with them on your local forums or communities, that you aren't of the spazzy HURFF A DURRF variety of teenager. If for some reason you think they are either judging you harshly for your age, or are simply not comfortable hanging around someone your age, then it would honestly be best to skip the meetups with them, because the day might just end up very awkward in either case.

The individual meetups should also be taken into consideration. If it is something like a dozen or more going to the movies and then to a cafe, all ages are usually welcome, but if it is something like 4 older girls going to dinner and then just hanging around town, it might be a little strange for everyone, yourself included, if a 13 year old were to go with them. Try to imagine the situation minus the ruffly clothes and headbows, do you think you would you feel like you are part of a group? Or like you are simply tagging along with an older cousin you barely know?

At most Lolita meetups the Lolita clothes are simply the excuse for the gathering, but not the real reason that brings people together. Other common interests besides "I like frills too!" are typically what keeps local meetups going strong, after all, there's only so much anyone can stand to talk about dresses. Truth be told, 13 year olds and 20-something year olds don't usually have the same interests. So if you're younger and at a meetup filled with much older girls, you might feel a bit left out once the meetup starts winding down and everyone is over the thrill of "OMG you're wearing a frilly dress too!" If you think this will be the case, you might want to consider going to only part of the meetup. Most meetups have two parts, an activity such as a movie or something interesting to do with a group followed by a more relaxed setting, usually at a cafe or restaurant. You might want to think about skipping the second half of a meet if you think that you are going to spend dinner staring at your plate and trying to look interested. If you feel that you will be welcome in the group and just want to meet some Lolitas in real life, by all means go to the movies or bowling or an art show with them! But know that not every situation is a mixed age appropriate situation, and know when it is time to say your goodbyes.

If, for one reason or another, you don't think your local meetups will workout for you, but you still want to be able to have a reason to get together with like minded people and dress up, try starting a club at your school. You might think you're the only one in town interested in Lolita, but the style is getting more and more popular, you never know who you might uncover in your own school who shares your passion for Lolita. Try broadening the clubs theme to anime, or even Japanese culture to try to get others interested. Here's a handy e-how tutorial on starting up a school club.

To anyone hosting a Lolita meetup, if you really don't feel like your meetup group would be appropriate for younger girls, don't be afraid to make the meetup age restricted. Having younger girls with you for the day is a responsibility, and if you feel like you cannot handle or even just don't want to bother with the responsibility, then it's best to have an age limit. Don't feel pressured to take on more responsibilities than you can handle. If you are hosting a meetup with younger girls in attendance, get in contact with their parents and let them know what exactly everyone will be doing for the day.
Posted by caro-chan