This post was written by Mis of froufro.us as part of F Yeah Lolita's new blogging team. 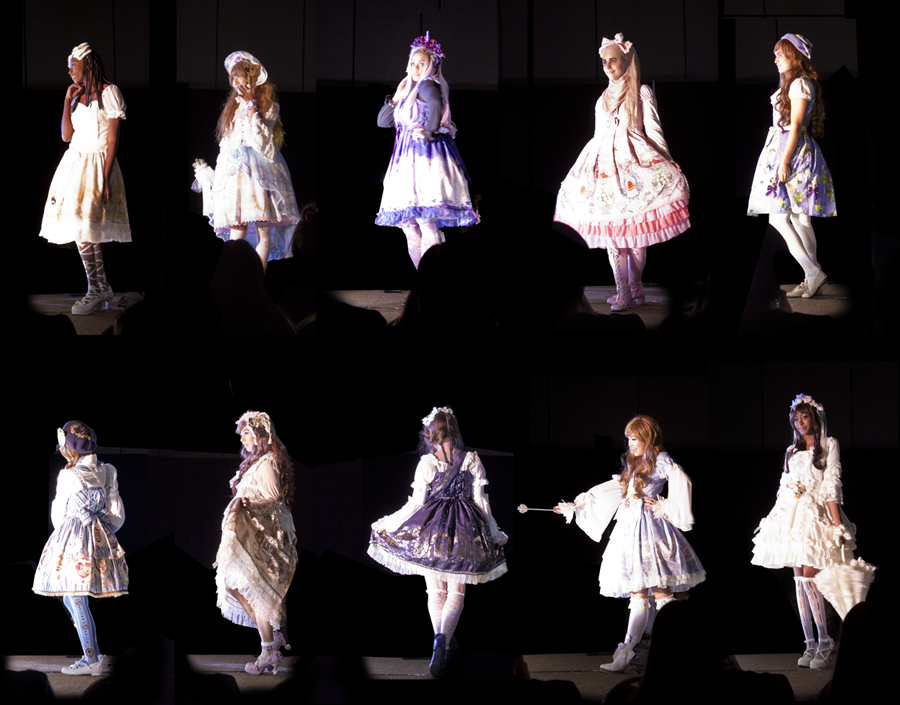 It’s been a full decade since the first Pacific Media Expo, and in that time, the convention has made a strong reputation for itself as a venue for lolita fashion. Since 2009, PMX has hosted fashion shows and tea parties with nearly every major label, from Angelic Pretty to Juliette et Justine. This year they welcomed back Innocent World and their lead designer Yumi Fujiwara, alongside Baby the Stars Shine Bright, Alice & the Pirates, Lief, Haenuli, and new guests Marchen die Prinzessin and White Forest. 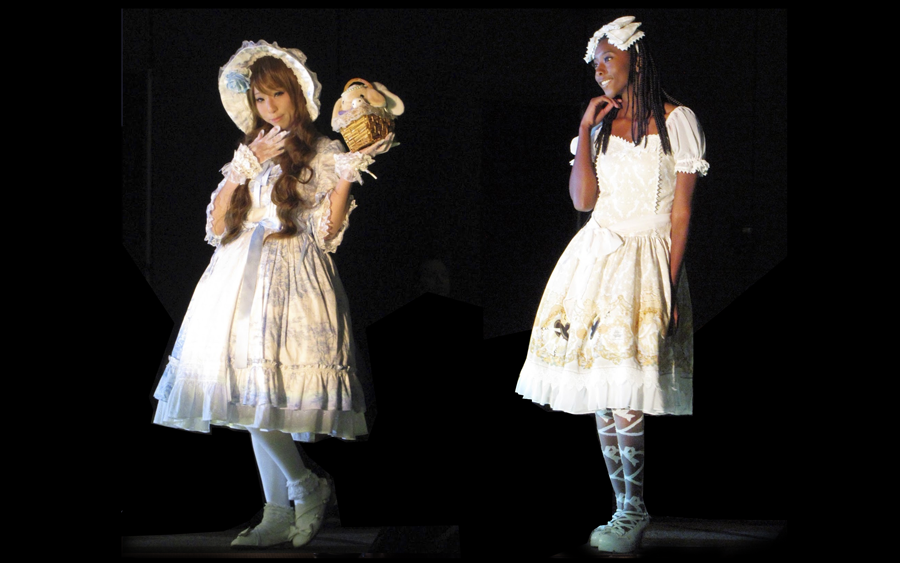 Korean brand White Forest led the way with their Walks of Elizabeth OP (left). The bunny in the basket gives this outfit a nostalgic touch- stuffed animals are associated more with sweet lolita these days, but maybe we’ll see a resurgence in the early-2000s trend of pairing plush toys with classic coordinates?Next up, Marchen die Prinzessin premiered their Swan Lake OP (right), a lovely illustrated print on an arabesque-patterned background. I love how the sash and socks tie the outfit together here (pun intended)! 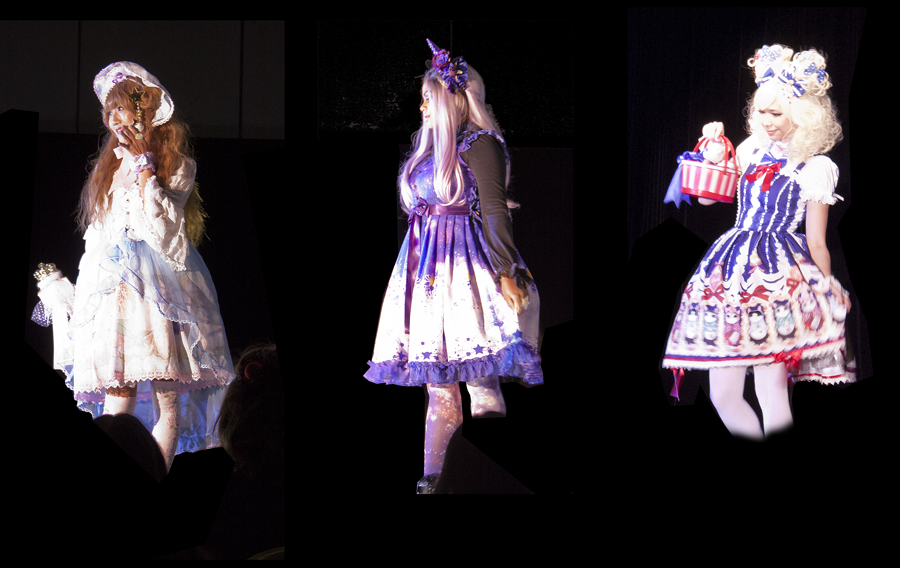 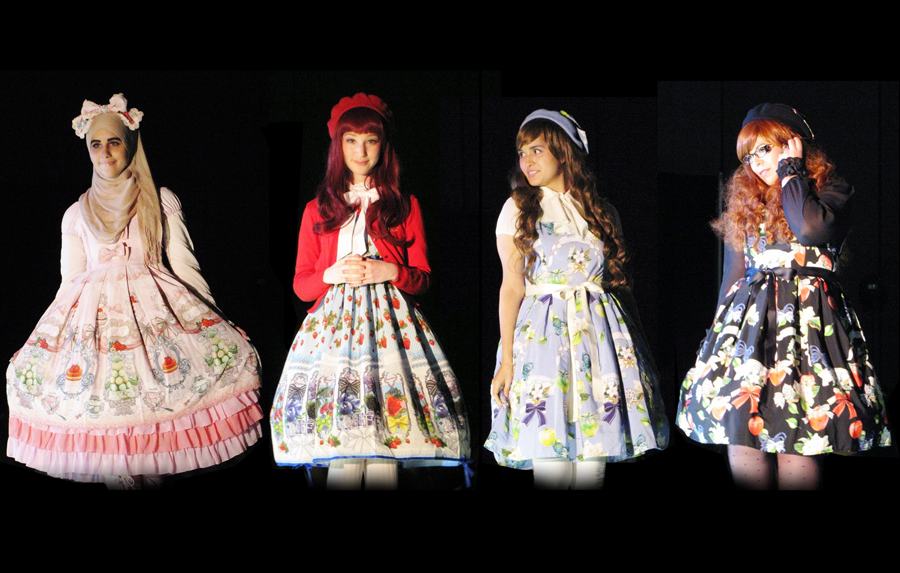 Lief gave us some sweet treats with their Noble High Tea OP (left), Veryberries JSK (second to left), and Apple Blossom JSKs (right). This was a great demonstration of the versatility of their dresses: the cuts are all similar, with lightly embellished bodices and box-pleated skirts, but they can easily lend themselves to a wearable otome look with the addition of a cardigan and beret, or be dressed up for a distinctive lolita look with a ruffled underskirt and fancy headdress. 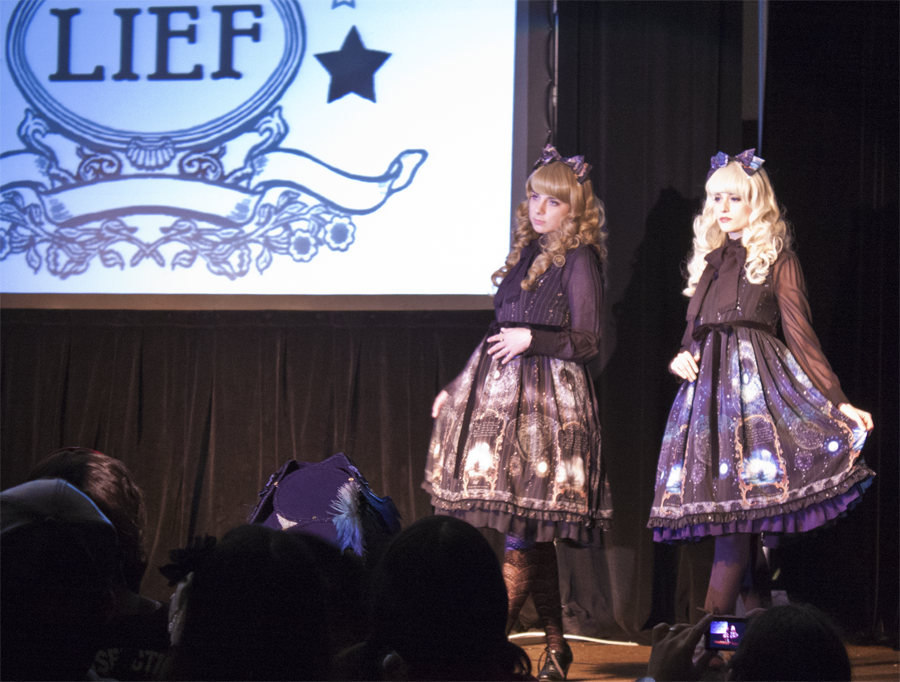 And as a coup de grace, Lief premiered their Celestial print series with these gorgeous twinned coordinates. The details in the print really seemed to glow under the spotlights! 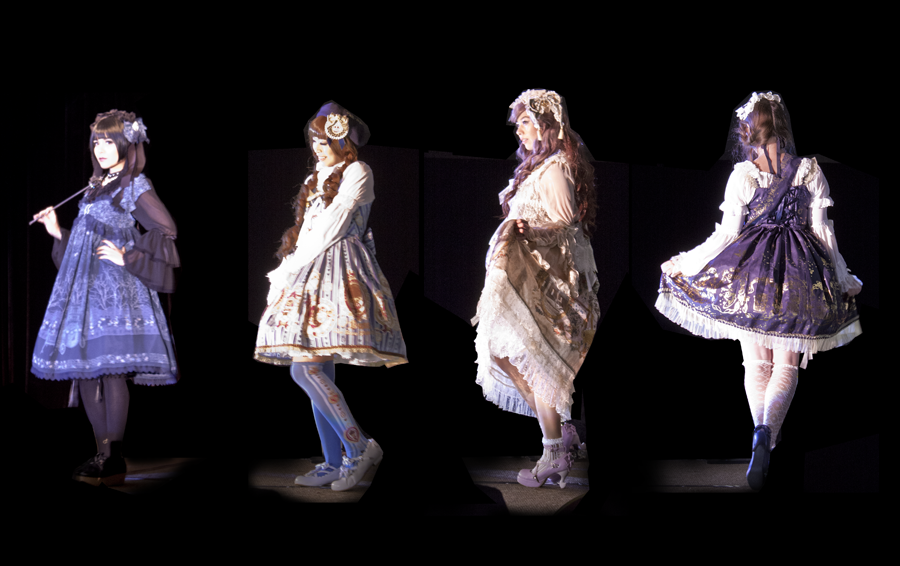 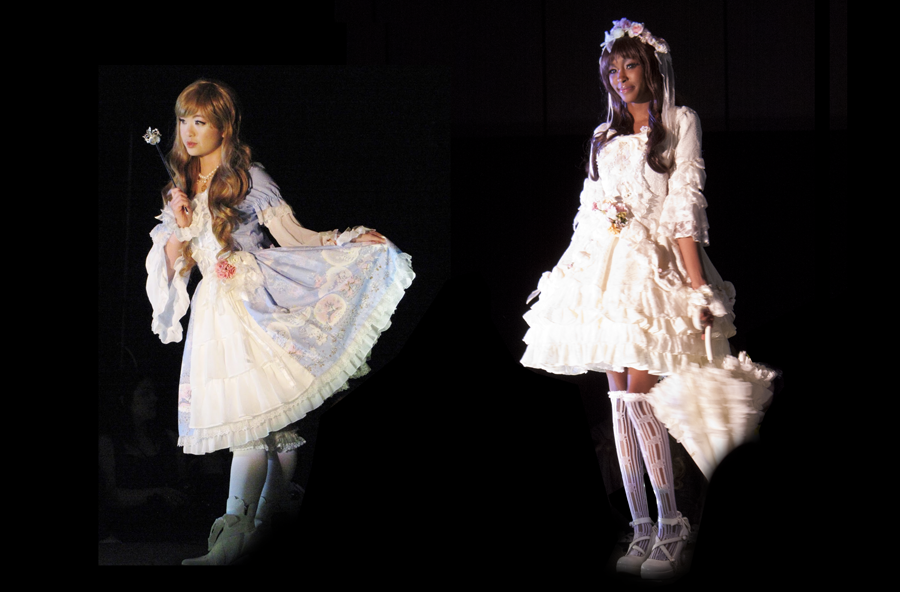 My personal favorite looks- both for the coordinates and the charismatic models- were the Queen of Snow OP, shown with a crown scepter and beribboned booties, and the Rosa Mistica OP, paired with a rose coronet and magnificent parasol. Gorgeous! 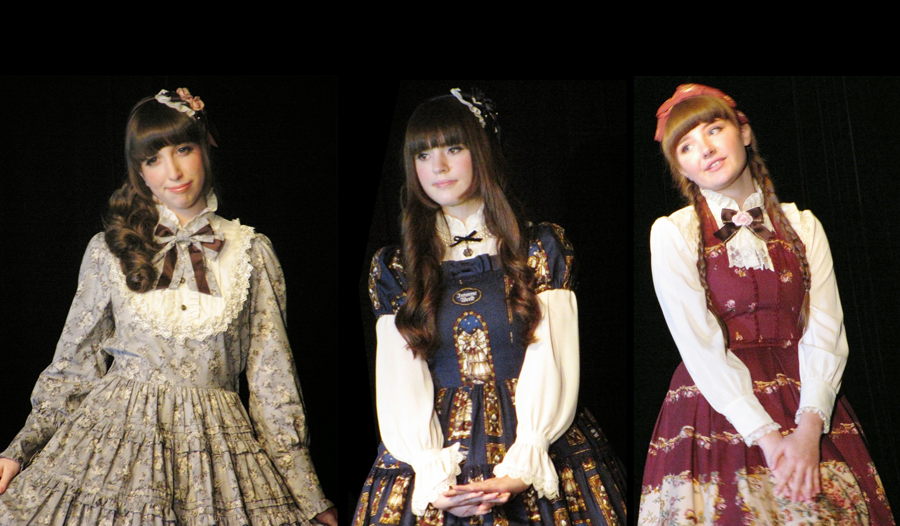 Last but not least, Innocent World took the stage with a selection of their newest pieces. In keeping with their signature style, each coordinate was understated, but never boring.
From left to right: Antique Doll Dress, Three Archangels OP, and Printed Rose Gobelin JSK. 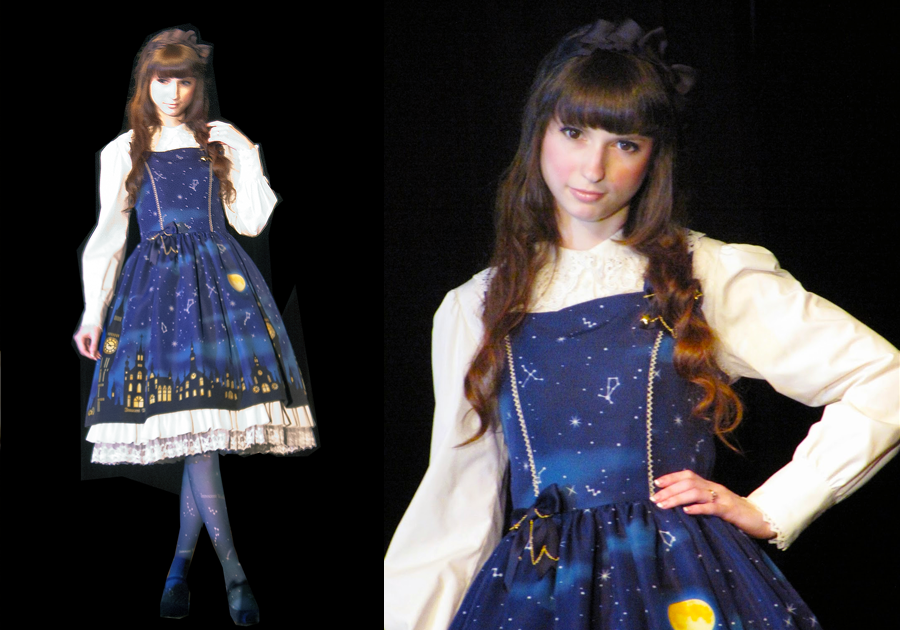 And for the grand finale, we saw the debut of Innocent World’s upcoming Big Ben print, a silhouette of the London skyline against a night sky full of constellations. The glowing yellows in the illustration and the gold trim detailing really make it pop! 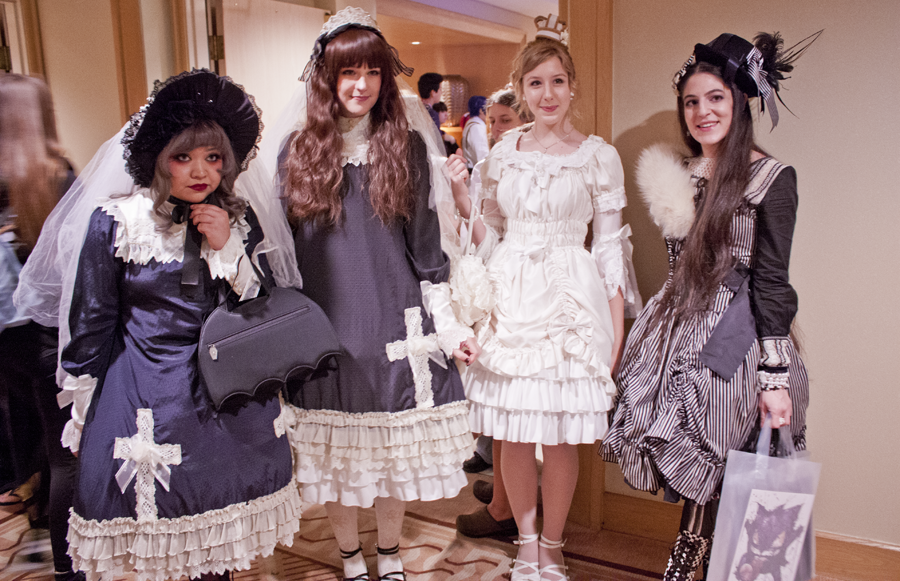 After the fashion show, everyone filtered out to do some last-minute shopping in the brand boutiques, where many of the items for sale were coming in fresh off the runway (and even marked down at the last minute!). It was fun to see so many of the major brands represented by attendees! Everyone looked fabulous, and looked like they were having a fabulous time. 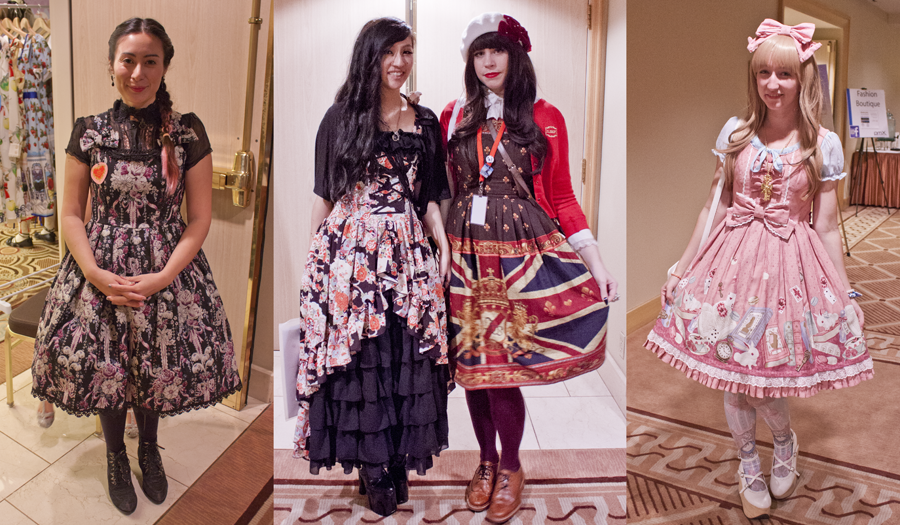 If you’re a lolita aficionado with the means to travel to LA, I’d recommend checking out PMX! Some might be put off by the fact that it is still primarily an anime convention, but alternative fashion does have a strong presence here. Along with the fashion show, brand tea parties and designer Q&As are a regular feature, and you might just find the perfect piece for a future coordinate in the brand boutiques. PMX provides plenty of opportunities for shopping, socializing, and enjoying frilly fashion with your fellow attendees.Photo credit: froufrous / secretforkeeps