Even though I've been working with it on Facebook, I've actually taken quite a break from doing any posts from the Lolita Blog Carnival myself lately! But I put my butt in gear to get this week's done, because it looked like a fun topic, this week is all about unusual colors within Lolita!

First I want to start with just a little bit of musing about why certain colors are considered "unusual" in Lolita. Generally, Lolita tends to be a very rule oriented fashion, and there are colors that are often perceived as being not just "normal" colors for Lolita, but sometimes they're considered the only acceptable colors, although, this has lightened up a bit in recent years. "Proper colors" seem to be largely decided by what sort of things brands are releasing, and as silly as it sounds, it's usually for an understandable reason. As I'm sure you all know, a head-to-toe matching outfit and even wardrobes is not uncommon at all in Lolita, and is even something that most Lolitas prefer, so it's generally just considered easier for Lolitas to pick one of the common colors and stick with it. It's easier to match that way if all of your clothes just so happen to be pink, sax blue, lavender, red, or black! It becomes a little less easy to find exactly what you're looking for when you throw every other color into the mix! It's a bit unfortunate for those who have very specific color inclinations, but a blessing to those who don't really intend to stray very far from the limited Lolita rainbow.

However, it's true that in recent years more and more colors have mixed themselves into the Lolita norm. I remember about 6 years ago a Lolita friend of mine was in love with the color green and dreamt of one day owning all the non-mint green brand released Lolita dresses. This was a pretty easy feat at the time, theoretically, as there were only about a dozen or so of them that were commonly known (Take a look at this search for "Green" grouped by year on Lolibrary!) . For the next few years brands started releasing more and more uncommon colors, and there was always a little bit of a murmur of commotion every time a brand released something in an odd color. "Did you see that yellow dress?" one Lolita might ask another, "Yes! Did you see that one that had mint and pink on it!?".

Nowadays, there are very few colors that Lolitas would ever be shocked to see, except maybe neon, but there are indeed a few colors that are still very underrepresented and often overlooked within the fashion! 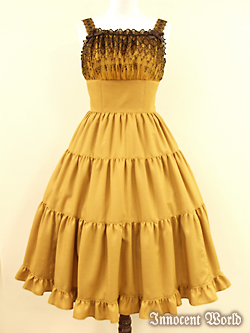 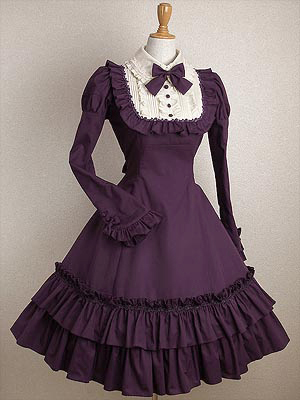 I figured I would lump these all into one category, because there are a few of them, from rich purple, to emerald green, to deep amber. The most common jewel tones you'll see within Lolita are red and blue, but some of the other colors will pop up every now and then. I've even written a separate post about the color purple! 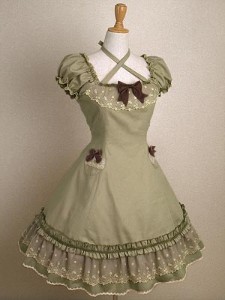 Olive green will either come in a light and airy pale olive, or a more traditional olive green. Innocent World probably uses this color the mos, but even they hardly use it at all. For it's desaturated nature, it's almost always seen in dresses that are more inclined towards the Classic Lolita. I consider the paler version of olive as the "pastel" for the Classic Lolita who wants to wear something light colored, but doesn't want to appear childish at all. Something about it makes it feel like a very grown up and no-nonsense color to me. 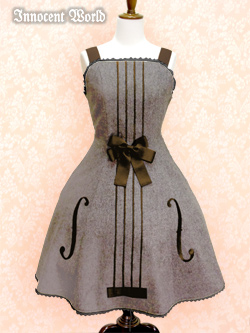 Another no-nonsense color would be grey! Also a frequently underused color in Lolita for probably just that reason. Grey is almost always reserved for woolen winter pieces, occasionally in the spring time a paler sort of slate grey might pop up in chiffon, showing grey's less sever side. Personally, I love the versatility of grey, pair it with black for a more Gothic outfit, or white for a more Sweet outfit. 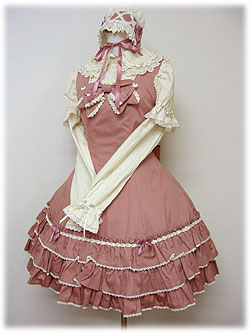 This color is pretty similar to the more commonly seen dusty rose, just a few shades darker. While dusty rose isn't an uncommon color in Classic Lolita at all, this peachy salmon pink used to be a much more common color in Sweet Lolita. I think it's an incredibly cute and demure color for Sweet Lolita! If pale olive green is the Classic Lolita's ideal choice for a cute color without looking childish, salmon pink is the Sweet Lolita's ideal choice for a more toned down color without giving up the air of childishness! 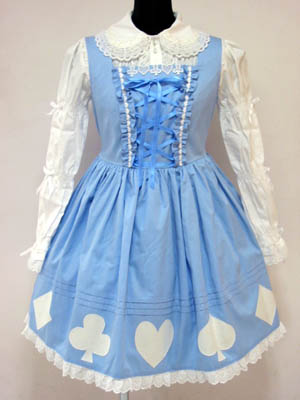 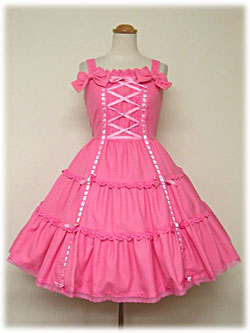 Can a pastel be vivid? This is another set of colors that I tend to associate with Old School Lolita. In the early 2000's, pastels weren't always as baby-soft as they are now. Pinks were often less baby and more Barbie, and blues weren't so much sax as they were Alice. The color difference is often only a shade or two more vivid, and not an obvious difference, until you try to match it with a newer piece that you thought was the same color! I feel like these colors are saved for the ideal Old School Lolita look. Even if you have to sacrifice the waist ties to have that perfect Old School headdress to match it, because good luck finding a new one that matches it!

If there's one thing you've probably noticed about these unusually colored items, it's that many of them are from brands that are typically considered Classic Lolita brands. In fact, the only items up here that aren't from Classic Lolita brands are the "outdated" colors. For whatever reason, brands that tend to cater towards the Sweet Lolita tend to stick with the usual Lolita colors, but Classic brands are often branching out into more unusual colors. Why? I have no idea. I would speculate that it has to do with Classic Lolita being more influenced by the Victorian era than Sweet Lolita, and there simply being a larger pot of color inspiration to dip from because of that. 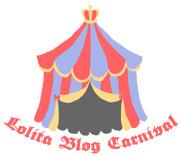 As usual with the LBC, I'm not the only one blogging about this topic! Check out all these other blogs that talked a little bit about unusual colors in Lolita!