In the past few months, it seems like Angelic Pretty has been doing a bit of switching up their style, while at the same time, revisiting some old favorites. It started sometime in the last year, when they started to release prints that were a bit bolder in color, and simpler in print design instead of the pastel jumble of cuteness that made them so popular in recent years. Angelic Pretty also gave everyone quite a shock when they announced that they had decided to re-release Sugary Carnival, a print which is definitely one of their most sought after pieces and was recently made into a replica. With this, it almost seemed as if Angelic Pretty realized "hey, we made some awesome stuff in the past that people still love, let's do that again!" so shortly after Sugary Carnival was re-released they came out with Aqua Princess, a print that looks surprisingly like Twinkle Mermaid, a print that was, at one time, another one of Angelic Pretty's most popular prints. 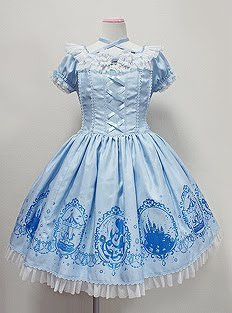 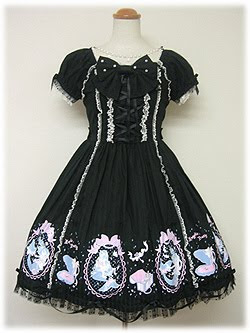 Left, Aqua Princess; Right, Twinkle Mermaid
Aqua Princess is very different from anything Angelic Pretty has released in a long time simply because the print is a simple 2 color print, reminiscent of some of their first custom screen printings in the early 2000's. 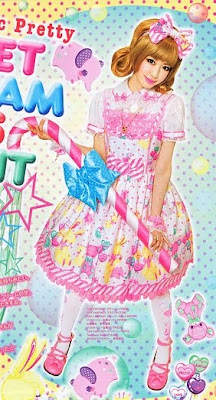 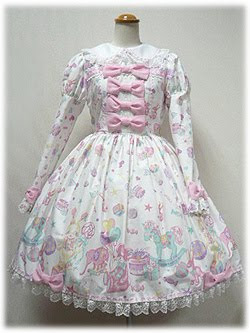 Left, Toy Fantasy; Right, Toy Parade.
While Toy Fantasy isn't a direct re-release, it is very reminiscent of Toy Parade, which was one of Angelic Pretty's very first custom fabric prints, from 2007.
What does this mean for Angelic Pretty and even Lolita? Does it mean that Angelic Pretty has simply run out of different combinations of candy and cute animals to add to their dresses? I doubt it. Angelic Pretty has been on the cutting edge of Lolita fashion for the past 4 years, or at least, the cutting edge of Lolita has been Angelic Pretty. I, and many other Lolitas, feel that the trends in Lolita are beginning to shift away from the over-the-top-rainbow-explosion-glitter-extravaganza that Angelic Pretty has popularized, and, at least a little bit, has started focusing a bit on the nostalgia of Lolita trends gone by. To me, it seems like Angelic Pretty is, instead of trying to come up with The Next Big Thing, grabbing a hold of this new trend for the old and making it their own. "Remember this?! If you liked it you're going to love this!" they seem to be saying.
Will this trend of re-releases and reimaginings continue for very long? Will other brands start to take heed? Baby has already re-released a couple popular prints this year, Stained Glass and Vampire Requiem, but, while popular, neither of which are as iconic as the Angelic Pretty prints that are getting a second go. Many Lolitas have been practically begging Moi Meme Moitie to follow in Baby and AP's footsteps and re-release what is quite possibly Lolita's most sought after print, Iron Gate. Will MmM listen and give in? MmM is known for being one of Lolita's most "exclusive" brands, priding themselves on high prices, limited runs, and nearly impossible to get a hold of pieces, so it's highly unlikely that the old Iron Gate print will ever see new life, but perhaps Mana has heard these cries and listened because a recent print of theirs is a bit reminiscent to the Iron Gate styling.
This re-releasing of older prints is something of a double-edged sword and within the Lolita community there are people who feel very strongly about both sides of the argument. There are those who long to get their hands on a long ago released print and would prefer not to simply buy a replica, even if one were available; and there are others who enjoy the collecting aspect of the fashion and would be crushed to find that a print that they spent a lot of time and money to own could now be so easily, and cheaply, bought. Myself, I'm a bit torn. I have several older prints that cost me an arm and leg and I would be a bit annoyed to find out that if I had only waited I could have gotten them for retail price, but there are even more prints that I know I'll never be able to get my hands on because they are just too rare. I think that when it comes right down to it, I am more of a fan of the reimaginings of prints rather than the re-releases. I feel that this way there is always something new coming out, even if it's heavily inspired, or just a rearranged version of something old.
What about the rest of you? Do you like the direction backwards some brands seem to be going? Or are you always craving something new and exciting from your favorite brands?

I also would like to start doing the 30 day Lolita meme that has been going around in the community! I don't know how I'll go about doing it, maybe I'll actually do a post every day, or every couple of days, or just answer all the questions for any missed days between blog posts. However I decide to do it, today is the first day, so let's answer the first question!
Day 1 – 10 things about your Lolita bubble.
If you want to join in on this meme along with everyone else, you can check out this post by Sweet Lolita On The Go to get all the questions!
A little note: I just got a new laptop (since my old was was on it's last leg!) and I decided to switch over to Chrome because everyone else is, and I, for whatever reason, can't figure how the heck to resize my images in blogger! So... until I figure that out (or just switch back to good old familiar Firefox) pictures are going to be a bit randomly sized around here!
Posted by caro-chan