Interview with Tyler of Lily of the Valley

A while ago I got the chance to interview Tyler from the indie Lolita brand Lily of the Valley. I've always been a fan of Tyler's work. Back before I had a fairly large Lolita wardrobe, I used to download her KiSS dolls to give myself a Lolita dress up fix!

Tyler's brand, Lily of the Valley, is a brand that often focuses on historical inspired designs and prints, and has a very charming, somewhere between Sweet, Classic and country styling, with touch of old school Lolita. Her recent print, Sweet Matryoshka, is a little bit Otome, a little bit Mori, and a little bit Sweet. I am definitely a fan of the versatility and blurring of the edges between styles that her designs feature!

Besides being a talented designer, Tyler is also a very prolific seamstress. She sews nearly all of her Lolita clothes! All of the coordinates from her in this interview feature clothing she has made for herself.

How long have you been into Lolita? Since 2003, so err 7 years. I kinda feel like an old fogey sometimes. Like when someone asks about "old" Angelic Pretty dresses like Sweet Macron, and I'm think: "wait didn't that come out not too long ago? ...oh it's been a couple of years!"
What are your favorite styles? Most probably classic, although I like to try many of the styles and mix them. My current style is something like classic/sweet/mori/otome/natural-kei. haha. I enjoy wearing a lot of layers and using vintage accessories. I still have a place in my heart for old school sweet, although I can't seem to stop adding more and more layers and accessories. 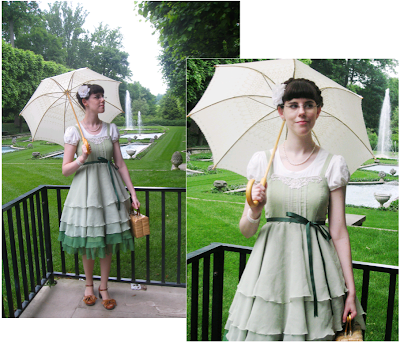 Tyler in a dress of her own creation.
How long have you been sewing and wearing your own clothes? Since the beginning. My first lolita outfit was an off brand blouse with a blue rose print skirt remade from a longer skirt I got at a local thrift store. In the early years of lolita on livejournal making or remaking your clothes was really the only way to wear the fashion. None of the brands shipped out of Japan, and even "In the Starlight" didn't exist yet.
Another reason I think I make my own clothes has to do with my childhood. My mother is a fine arts jeweler and my Dad is an electrical/systems engineer. Growing up around a lot of crafty and DIY people, I heard quite a bit of "Oh, you don't need to buy that, I'll show you how to make it yourself." Once you get used to being able to make a lot of your own things it's hard to go back to buying things that aren't exactly how you would have done it. The only brand I currently own are some very lovely socks!
I think this delight in versatility of design is why I try to allow my customers as wide range of custom choices as I can with my lines and hats. I would like them to have a dress or hat that feels like theirs, rather then something just off the rack. 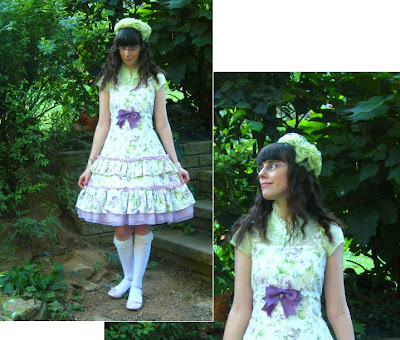 Tyler in a dress of her own creation.
You seem to make a lot of your own accessories and use a variety of different handicrafts in your pieces, do you have any favorite handicrafts? Oh that's a really hard question. I'm always trying new techniques. Well to start off; jewelry has always been something I've been interested in because of my Mom; it's a nice break from sewing. I am really hoping that the Sweet Acorns jewelry line does well, because I want to continue to offer matching jewelry for my lines.
Tatting is something that I have picked up this year. I enjoy it a lot because it's something you can do on the fly; pull it out during car trips or while watching movies. Also tatting is very fussy and feminine, and that appeals! It's almost a lost art, when I was trying to learn it I couldn't find anyone to teach me how. To this date I haven't found anyone outside of the internet who does it too. I really love old needlework techniques and like to do my own part to keep them alive. I wish it was something I could work into my lolita lines, but it's so time consuming it would be exorbitant!
When it gets down to it I think my favorite handicraft is making hats. There is something very exciting and satisfying about making one. The stiff lines and structure, figuring how how to trim it just so. Plus you can put a lot of trimmings on hats that you could never put on a dress! Feathers, silk flowers, birds! I have a bag of straw braid taken from a thrift store hat stashed away for when I have a time to make it into a spoon bonnet. I'm really looking forward to (and dreading) soaking the straw braid in hot water and seeing if I can fight it into a hat shape!

When did you start your own brand, Lily of the Valley? My first line "Keys to the Kingdom" was released in 2006, but before this I had done quite a few commissions. The line was skirt with a castle screen printed around the hem. It sold well, but not as much as I would have liked at the time. The continuous print was very hard to do and my friend who was doing the screen printing had real trouble with it. We filled the orders but ended up with a lot of misprinted material and frustration. That left me feeling a bit discouraged about future lines. 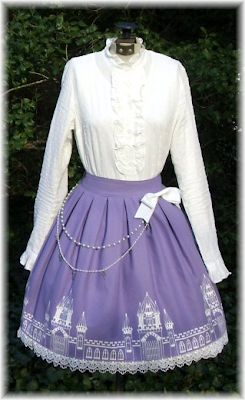 Keys to the Kingdom
So instead of trying a new one I came up with the idea for the Admiral Tricorn hats. They went over very well, and I still get a good number of orders, even 3 years later. This really encouraged me and I got used to taking several custom orders at once. Looking back to the "Keys to the Kingdom" line; while I think I was ready to do it, I don't think I had a good idea of what doing it entailed. I over reached; something that was feasible to do for one skirt was trouble for several. It was a good experience and really taught me that you have to be circumspect when making such large plans.
In 2009 I decided to make another go at it, putting up the Lily of the Valley website and my inaugural line "Excerpts from a Victorian Cookbook". I am very happy with how it came out and the response. It is great being able to get custom printed fabric in small amounts. I had considered getting fabric printed with my own designs before but it was never possible because of the very large amount you had to buy. 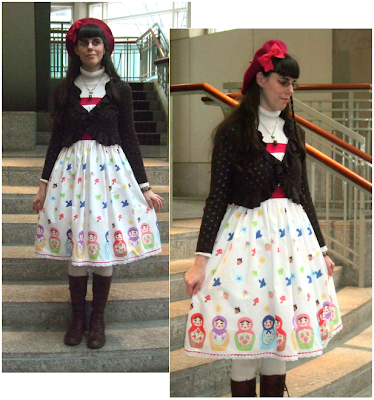 Tyler in a dress of her own creation, the Sweet Matryoshka print fro Lily of the Valley.
What are the ideas or aesthetics behind Lily of the Valley?
I am inspired by a lot of different things, so this is a very difficult question to ask! I'm rather influenced by fairy tales and their beautiful illustrations, I grew up reading them rather then watching the sanitized Disney versions, and I think they are really delightful, and sometimes quite dark. I remember reading the story "The Red Shoes" when I was little and being horrified for months because of it. That sort of thing appeals as well, because life is like that, it's very bright and rather magical; but there are those dark places that make the bright parts that much brighter.
Haha, I guess I haven't done many prints yet that have that feeling, I have so many ideas and it's hard to decide which ones to do. But I think I want my prints to invoke a feeling or story. "Excerpts from a Victorian Cookbook" was inspired by the illustrations from "Mrs Beeton's book of Household Management", and I was delighted by the idea of Victorian confections. When making a cake or pudding was time consuming, and strictly for special occasions; so they molded and decorated them until they looked like something fairies would make. While my newest line "Sweet Matryoshka" reminds me of a walk in the woods as a child. Birds to be looked at in delight, flowers and berries to be picked, mushrooms to be examined for pixies, and acorns and other treasures stuck in your pocket to be enjoyed later.
In all this I want my pieces to be very wearable. To be able to be dressed up to the nines as lolita, or dressed down with a little cardigan to stroll around town in. I hope I am successful at this!

What's the most difficult thing about having your own brand?
The scrutiny of being an independent brand in the both very large and rather small English speaking online lolita community. If I do something that flops, it's a much bigger deal for me then the established brands. I can only put out one line at a time, and pretty much have one customer base; who mass communicate very easily and quickly. If the Japanese brands put out something that the EGL community doesn't like, they still have the Japanese and other markets; as well as other lines. I don't have that luxury.
I do think that this really pushes me to work that much harder and try to think outside of the box; come up with motifs that haven't been done before, or haven't been done in that way before. 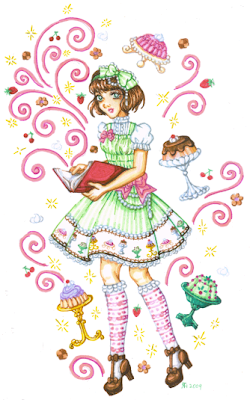 Tyler's illustration for her Excerpts from a Victorian Cookbook print line.
What is your favorite thing about having your own brand?
I think hands down my favorite thing is seeing my dresses being worn and enjoyed, it's a kind of excitement that's hard to describe. I remember years ago when I was taking commissions; seeing one of my dresses on a girl at Otakon and thinking "I don't remember that Baby dress..." before realizing it was something I made. I wanted to break out into dance I was so happy!
Being able to design the prints for my pieces makes it that much more special. I drew for years before I started sewing. The prints are almost a kind of story, in colors, symbols, and emotions. When someone decides to buy and wear a dress that I designed; they are sort of sharing that story, like we both read and enjoyed it. Hopefully in a non-cheesy way!

Where do you see, or where would you like to see Lily of the Valley in the future?
I would like to be able to come out with more lines more quickly. I have at least 20 different design ideas clamoring in my head and I'd like to make them all! This of course depends on how quickly I get orders and fill them. My current day dream is for my lines to sell out the day they are released!
I just got an embroidery machine so I am planning some embroidered lines. I'm really excited by the idea of doing a redux of the "Keys to the Kingdom" line as an embroidery, or a variation of the very popular prototype "Admiral Pirate Set". 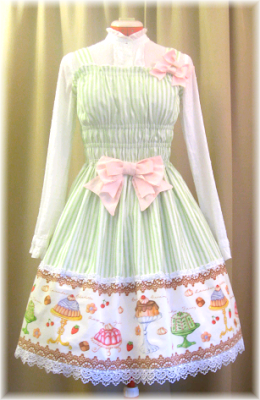 You can find Lily of the Valley's shop page here, or check out her blog!
I have a dress set made by Tyler, I actually got it second hand and snapped it up pretty quickly because it was a really good deal and made by someone who's work I've always enjoyed. It's definitely a gorgeous piece! The design is awesome and the construction is just perfect. If you're looking for an indie brand, especially an indie brand with prints that are both Sweet and Elegant, I would definitely recommend Lily of the Valley!
Posted by caro-chan