In my last post I hinted at a project I've been working on with some other Lolitas, well, the day has finally come where I can blab as much as I want about it :D

I'm part of a Lolita magazine team! The magazine is called Glacée and and will be a print magazine all about Lolita and living elegantly both in and out of the fashion. There are a lot of us working behind the scenes on this including the Lolitas behind:
Miss Lumpy
Lolita Charm
Pretty Pop
Ramble Rori
La Vida Frills
Darkly Darling
& Intravenous Sugar
Even though there are a bunch of it working on this together, we're still looking for submissions from talented artists, writers, journalists, photographers, or any other creative Lolitas who would be interested in helping us put together our debut issue. Glacée is a magazine about the Lolita fashion, by real life Lolitas.

I'm really excited to be working on such an awesome project like this! I love Lolita magazines and have a huge pile of Keras, G&LBs, Gosuroris, and even a handful of more obscure Lolita magazines that only ever saw a couple issues, so it's really exciting that we get to work on not only another one, but an English language one aimed at western Lolitas.

Click the banner above to check out our blog for more information, including a list of things that we could really use a little bit of help with.

So, if you've always wanted to get your picture, art, or writing printed in a Lolita magazine, this could be your chance! So check out the blog, follow it even, because for those of you who are interested in contributing something but are too shy or don't have the time to write a full-length article there will be occasional polls and questions for people to get involved with and your response could be featured in an issue of the magazine! 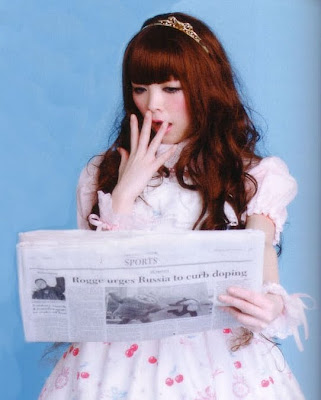