What I Learned Vending Lolita Goods at an Anime Convention

Last weekend I got the chance to vend at U-Con, a local anime convention. While I vended there last year this year I was a lot more prepared and did a little more than just lay things out on a table. I tried a few different things throughout the course of the weekend to catch people's eyes and in this post I'll be talking a little bit about what I learned. 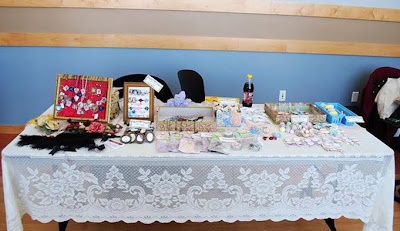 This is what my table looked like Friday morning! Sorry I didn't get any closeups or pictures of the other layouts I tried, I was pretty busy!

Now, this might not work for everyone, but these are the trends that I noticed at my own table. I know that a lot of Lolita's have their own handmade shops and have considered vending, at an anime con or elsewhere, so hopefully what I've learned might help you out a bit if you decide to vend.
Again, I don't know if these things were just particular to my table and the con I was at, but I figured I might as well share them with other Lolitas who are interested in vending at cons one day. This spring I'll be at Anime Boston vending, which is a much, much larger con (and Artist Alley!) than U-Con, so it will be very interesting to see how different the experience is.

Have you vended your art or crafts at a con or art show? Do you have any tips and tricks to share? I find that most of the "Artist Alley vending tips" are aimed at 2D artists selling prints and the things that attract anime print buyers is considerably different than attracting Lolita accessory sellers.

If you are interested in some more Artist Alley vending tips, check out the ShadowScript blog, as the artist who runs it vends at a lot of conventions and often has some really great tips and writes a lot about the subject. She sells both 2D and 3D art, so her tips are pretty relevant no matter what kind of art you're selling!
Posted by caro-chan