Sometime last year Baby released Vampire Requiem, their answer to Moitie's famous Iron Gate. It quickly became one of Baby's most popular prints, ever, with it's Gothic charm. Recently Baby has announced that they will be re-releasing this print, as a JSK and a corsetted skirt, in black, red, and a new royal blue color. 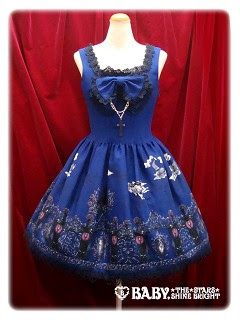 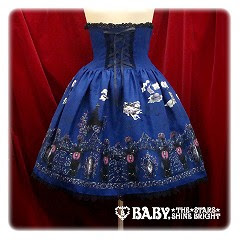 The re-release is wonderful news to some, sort of shocking to others. Re-releases are bad news to some Lolitas because it means that their rare and expensive dress, a dress that they may have spent hundreds more than retail on with the justification of "Hey, I can always sell it later and get how much I spent on it!", might now suddenly plummet in price now that a big chunk of the people who missed out the first time around can all the sudden get their hands on it for retail price. To some, Lolita is a collectible hobby and they view some of their pieces as investments. On the other hand, re-releases allow more people to get something they seriously love and have no other way of getting.

Personally, I think re-releases are great. I think they're best when they're slightly different from the original release, either released in a different colorway, the print is slightly different, or the cut of the dress is different. What are your opinions on re-releases? Do you love how exclusive rare prints are? Or do you feel that other people owning the same print as you shouldn't effect how you feel about a print?

In other BtSSB related news, Baby and Alice & the Pirates are coming to NYC! They'll be replacing Angelic Pretty in NYC's Tokyo Rebel store. While this is bad news for AP fans, some good news is that the last of their AP stock will be on sale.

Finally, I just want to say, sorry for the long time between posts! Over the weekend I was vending at a con and for the week or so before it I had been really trying to get some final things done. Also, maybe you've noticed, but I have a new layout :D Let me know what you think about it!
Posted by caro-chan