Well, May has clearly been the month of unannounced hiatus for F Yeah Lolita! I have a handful of posts halfway, or even nearly finished, waiting to go up, but May has just been a bit busy. I did have time to get together with my friend Janet and take some pictures in a park though!

I recently did a bit of a closet clearing, selling off some things that I rarely wore or never ended up suiting me and buying something new and shiny with the profit. And that new and shiny thing is Baby's Alice Portrait JSK in black. I love this print! Not just because of the vertical stripes, which is something I think Lolita needs a whole lot more of, but also because of the Alice themed portraits in big gilt frames along the bottom. Despite the vague Alice theme, the print is very Classical, and almost Gothic looking. But that could very well be because I chose the black version, of course. 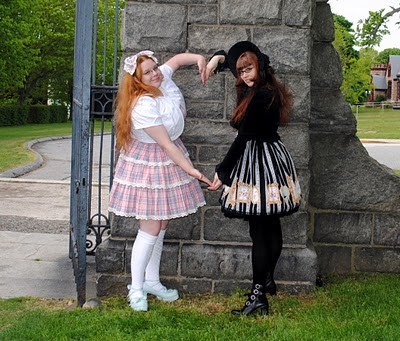 Janet and I, making a not-so-lopsided looking heart. I had to do some... post production dye touch-ups because neither of us had bothered to dye our hair anytime recently.

I've been having fun playing around with Photoshop Actions, so I made a couple pictures from that day look antiquey. 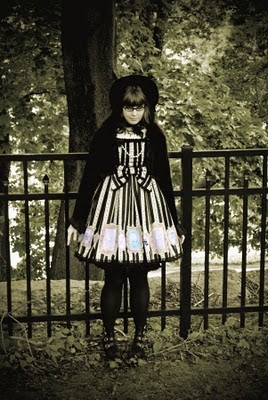 A standard "doll pose", arms straight out, toes in, staring blankly ahead! Yes, it's a silly pose, but I like it. It's old school style XD 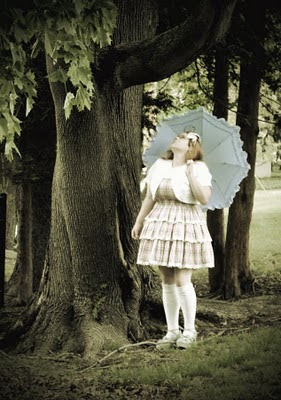 Janet, admiring the trees, and also protecting herself and her parasol from the sprinkling of rain we were getting. We were afraid to get it wet, since it was brand new and not all brand parasols are meant to double as umbrellas. 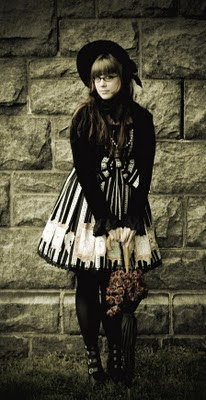 I was carrying a parasol as well. Actually, mine was an umbrella. It's a black umbrella with a badass curved wooden handle and a whole lot of red roses along the edge, so when it's closed it looks like bouquet!
Outfit rundowns, for the curious.

Me
JSK: Baby, The Stars Shine Bright
Bolero: Vintage with lace I sewed on it
Bonnet: Handmade, by me :D
Parasol: Offbrand
Shoes: Offbrand