A Few Of My Newest Pieces

As I rambled about briefly in the post before this, I have been doing a little bit of closet cleaning, okay, so it's a bit more like closet turnover. I've been selling off stuff I never wore, or wore only a few times, mainly super sweet stuff, and replacing it with new pieces that fit with the style I've been leaning towards lately. I have recently begun to get into a more Classic Lolita style, but most of my wardrobe is Gothic or Sweet Lolita in black and pink, not exactly a Classic friendly wardrobe. Not all of the pieces I have bought in the past couple months are strictly Classic Lolita, but I think they have a Classic feel to them. 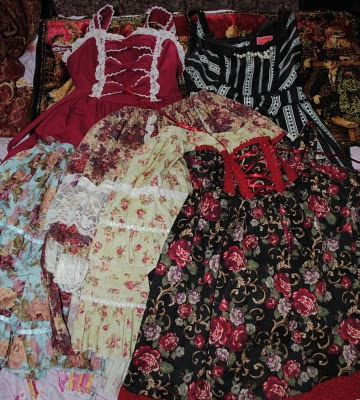 My haul, 2 JSKs, and 4 skirts. These include a 2004 Sleeping Princess JSK, Baby's Alice Portrait JSK, 2 Bodyline skirts, an In The Starlight skirt, and an epically old Metamorphose gobelin print skirt. Now, let's take a closer look at a few of these! 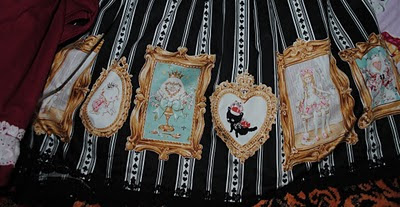 The print and details on Baby's Alice Portrait JSK is just amazing! Click it for a larger view to see the card suit lace and just how cute the portraits are. I am not that much of an Alice fan, so I am really happy to see that they kept the Aliceness to a minimum on this print. 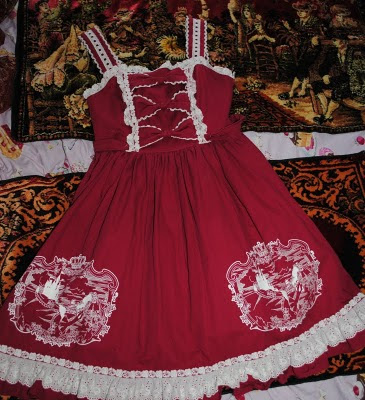 I found this while digging around the sales community, it's an Angelic Pretty print from 2004, Sleeping Princess, well before their days of all over, over the top pastel prints. I am honestly not quite sure what I am going to do with this dress! As red and white is pretty damned sweet and I've been trying to stay away from that slippery slope, but the red is a rather dark red, so I am hoping to make a more Classic Lolita coordinate out of it. I'm planning on hunting down one of those red Meta boleros that came in lucky packs a few years ago to pair with this along with some red heels. it's probably going to be a pain to match up all those reds though! 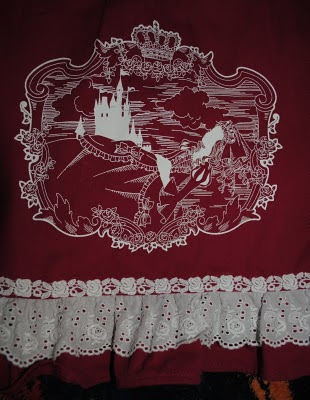 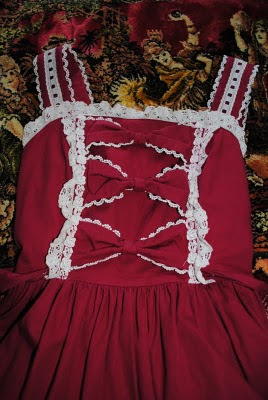 Here is a couple detail shots. I'm just loving the print, as well as the eyelet lace along the hem! I'm also big on the faux bows on the front. Sometimes, especially on older Lolita pieces, instead of bows on the bodice they had these strips of fabric going across that are tied in the middle. It looks just like a bow, but without the hassle of it sticking up in awkward positions I guess. 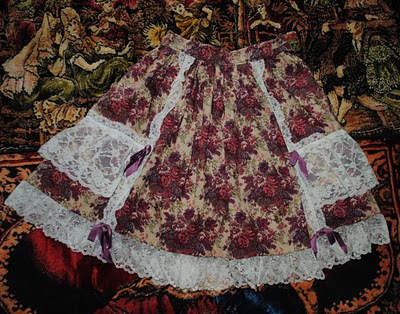 Quite possibly my favorite piece from the haul is this Metamorphose gobelin print skirt. Aah, the grandma couch dress, it's a classic! After I got it I realized that it looked sort of familiar, and that's because I recognized it from this picture from 2000 of Sachi. Which just makes me love this skirt all the more. I don't know if my skirt is over 10 years old, as Meta has been releasing gobelin pieces since the dawn of time, and the lace on my skirt's hem looks a bit longer than the one on Sachi, but still, I love the fact that this skirt design is one from Lolita's early days. 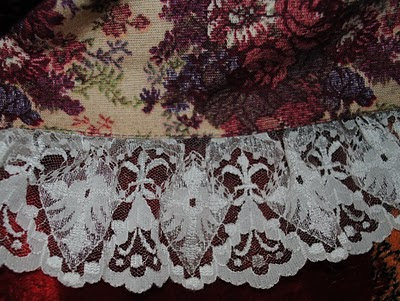 Yes, the Meta skirt is covered in Raschel lace, but it's soft and delicate looking, so it gets away with it. Plus, check out the lace along the hem, it's covered in fleur-de-lis and winged crosses!
Have you noticed my growing obsession with older Lolita pieces? While I've always likes a fair share of older Lolita designs, probably because I've been interested in the fashion for so long that some of these were new when I first found out about Lolita, so some are kind of my original dream dresses XD But after doing some research for this post, about Lolita's history, I became really enamored with older pieces, the older the better! And to get my hands on a couple of these pieces has really been a dream. I think even the most up-to-date Lolita, even one who has only been in the fashion for a very short amount of time, should have at least one older piece of brand, even if it's just an old fashioned rectangle headdress. I don't know what it is about older pieces, but to me they feel sort of magical, as silly as it sounds, especially the thought that it has exchanged hands and been well loved by several different Lolitas, even if it was sold because it just isn't their style any more.
Posted by caro-chan