This post, by Momco on LJ, has got me thinking about my style from 2009. Last year I went absolutely bananas when it came to buying new clothes, this year I toned it down a bit and only bought what I needed, and even sold a bunch of stuff that I don't wear. I figured I would do the little meme Momoco posted. Feel free to do this little meme in the comments or your own blog! I would love to hear about everyone's year in Lolita.

This year, I was lucky enough to get/make for myself:
I didn't exactly buy any dream pieces this year, but I did get three of my most favorite to wear dresses. My Bodyline Naoto Knock-off cage skirt (yeah, I'm thankful for a Bodyline dress, I just really love it!), and 2 Baby bustle back plaid JSKs in both pink/black and red/black. I also got back into the habit of wearing blouses towards the end of this year. I'd been going through a year long blouse rebellion and only really wanting to wear boleros over blouseless JSKs. It feels nice to wear blouses again, it makes me feel like my outfits are much more complete. 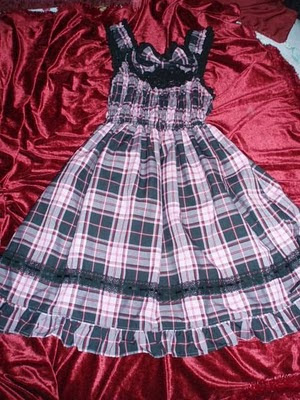 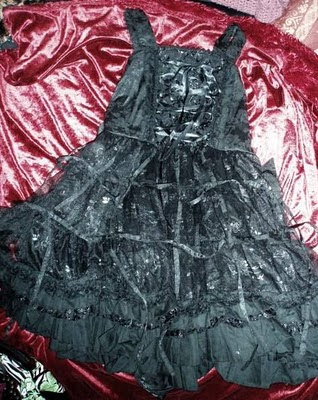 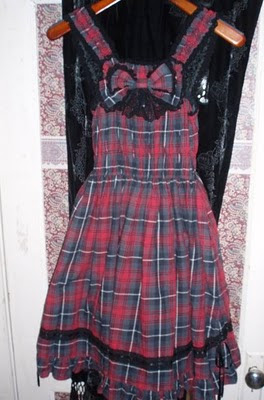 Next year, I hope to have more of:
Definitely more commissioned pieces! 2008 and 2009 were the years of Caro-chan's burando extravaganza. I would really like 2010 to be the year of pieces that are custom made to fit me perfectly, and even pieces that I've designed myself! I hope to even finally get around to designing some fabric I love and getting it custom printed, I have a lot of ideas and half sketches. Like every Lolita, and every new year, I would like to learn to sew, at least have the patience to sew a few skirts! I hope to have a few more Classic pieces, I've always sort of ignored Classic, but over the past couple months I've been falling in love with the very decadent Classic styles.

Besides just new clothes that I want, I hope to go to a ton more meetups and have more Lolidays this year, especially ones in my state. Connecticut has tons of awesome Lolitas and I would really love for us all to get together a little more. I want to be a bit more active in our local Lolita scene too, by hosting or even just helping with more meetups. I too often just take the backseat at Lolita events and just show up instead of host. I would like to learn to be a better photographer and start taking some nice Lolita photos of me and my friends. I also am hoping to take my Loliblogging to the XTREME by doing more tutorials, posting more pictures of my own outfits, and doing a few more giveaways.

I guess I want 2010 to be very busy XD But when it comes right down to it I just want to be more creative, more active, and less frivolous with my money, which is something everyone should strive for in the new year, Lolita or not.

My favorite Lolita memory of 2009 was:
There are so many! This year didn't have too many meetups or Lolita events, but there was still a lot of fun stuff going on. I would have to say my top favorite Lolita things I did this year was our Guro photoshoot and our cross-state Loli road trip to go to a Lolita's yard sale to pick up some cheap burando.

I have been going through my folders, looking for various pictures from whatever Lolita related thing I could find that I've done this year. Instead of posting all of them (I usually take tons of pictures!) I'll go through and post a single photo from each event.

The first Lolita event of 2009 was a little get together in February to exchange some very late Christmas presents, and to go bowling in our frills, or Bowlita, as I like to call it. I pretty much immediately fell flat on my face and scraped my palms on the bowling ally floor. What can I say? I just have sooo much grace. Here's me and Janet making the lumpiest heart ever, as is tradition. I'm wearing my BtSSB Puppy Parfait skirt that I love so much :D

Once the weather got a little bit warmer, in late March I think, we headed to an aquarium for a small meetup. One of the coolest things at a meetup happened here! We were walking around, browsing some local shops and 2 Japanese girls, who spoke hardly any English, recognized us as Lolitas and followed us around a bit asking us about our favorite Jrock bands, then we all tried to say each others names. A group of older women wanted to take our pictures with these girls as we exclaimed band names back and forth. That was pretty much the extent of the conversation XD no one knew enough Japanese to speak to them, and they didn't seem to know a whole lot of English. The picture I have that the older women took is all dim and half our group is cut off, but I still love it! This isnt't that picture obviously, but one from the aquarium. I'm in the back, in pink and black BtSSB, as usual, getting over excited about a penguin statue. 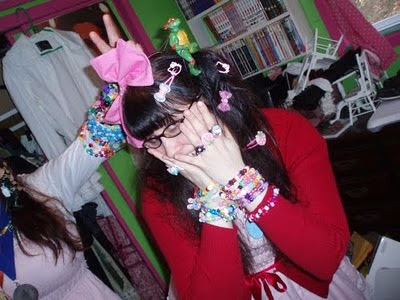 As is apparently tradition for us we decided to dress up stupidly for April Fools day. This year we did decora. Janet borrowed a huge jar of her raver friends bracelets, we all pooled together our stupid action figures, and then we went to town. You ended up not being able to see it, but I had a Kevin Costner from Waterworld action figure in my hair. Janet had wresting action figures, and Rayray had anime figurines. We, needless to say, looked stupid. 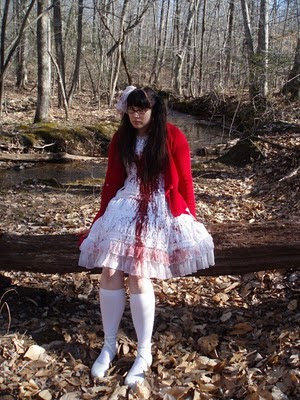 The same day as our nightmare deco fest, we did a guro shoot. This was all sorts of fun, and most of the pictures turned out really cool. I did manage to nearly ruin a lot of clothes though! My white rocking horse shoes have red splatters on them now, and it took a lot of bleaching to get out some dye from a shirt I wore after the guro shoot. To learn from my mistakes, check out the Guro Lolita post I made a few months ago. 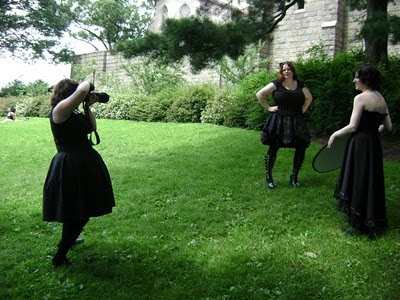 A few months passed without much stuff going on, then Janet and I went to a Gothic Lolita meetup in New York City. We had a blast and it was great meeting new Lolitas, even if going out to the city kind of drains me! For a meetup that started at noon I had to get up and get going at 6am! But it was worth it, this meetup was hosted at a Medieval art museum, and it was amazing to be able to see the art there. I've been wanting to go back ever since. This picture is of Janet getting her picture taken, she was wearing the greatest pair of boots I'd ever seen! 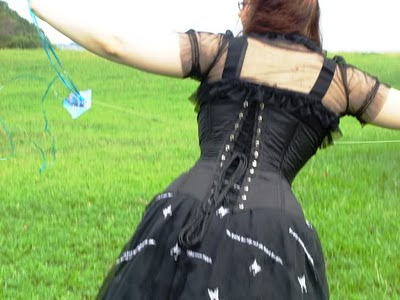 We then had another small meetup, a kite flying one! To meetups I usually don't wear Gothic Lolita, because it's what I wear at home, so it doesn't really feel like dressing up to me. But I decided to go for it this time and wear my "normal" clothes to a meetup. The little bolero is my only piece of Moitie and I almost left it on the boardwalk. Oops, I make a very poor Manatard.

We decided to travel across the state to go to a girls yardsale where she was selling off a lot of her Japanese brand items. We all got a lot of awesome stuff for really cheap. Besides a bunch of h.NAOTO tops I picked up a Black Peace Now (with tags still attached!) jacket for $30, and Rayray got a Jesus Diamante necklace for $35. This is a picture of Janet filling up her car, looking shocked to be caught doing something so unladylike!

Besides a few random get togethers to go to the movies, and a couple conventions, those were the only Lolievents of the year that I can think of right now! I really hope to have more in 2010.

Just like my other meme, if you do this one, let me know and I'll make a list of everyone who's done it!
Posted by caro-chan