Lolita has gone through a lot over the years, and I don't just mean how it's changed since the early days, I'm talking about all the different trends that have come hurdling through, leaving their mark on the Lolita community. The little trends, the things everyone just had to have or do at one point or another (pink and mint, cupcake rings, corset shaped purses...), aren't really what I'm going to focus on today, since they are far too numerous to count. Instead I'm going to be focusing on a few of the times when other major Japanese fashions have collided with Lolita. Alternative fashions like Lolita are bound to have trends, just like mainstream fashion, but because Lolita exists outside of the mainstream there is very little need to get rid of old trends just because they're not fresh and new anymore. Instead, Lolita just keeps on hurdling through and picking up new inspiration. Kind of like a great big Katamari of bows and frills. 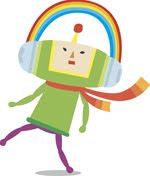 I would like to point out, I am by no means an expert on any of these Japanese fashions, I only know about them from how they mingle with Lolita. I may even be getting the exact name wrong. So if you're a hard core Hime Gyaru, or whatever, come to yell at me for "getting it wrong", sorry, just correct me and I'll try to correct this post as much as possible. I've also tried to present these in chronological order, but again, I might have gotten them mixed up. 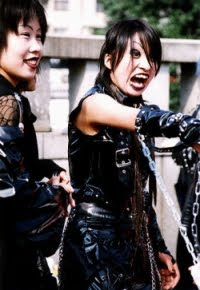 One of Lolita's first mash-ups, and probably one of it's worst, was with Visual Kei. It's not hard to see where this nightmarish mix came from, as Japanese Visual bands are pretty much responsible for Lolita. But somewhere along the way it became "OK" to mix up any wacky band cosplay in with the cupcakey Lolita silhouette. PVC, chains, grommets, bondage wear, spikes, and all sorts things that pushed good taste and elegance into the dirt sprouted up in "Lolita" outfits. Luckily this mash-up has pretty much died out, only brought up on occasion by newbies not quite in the know, who associate Lolita a little too closely with Jrock. While some Visual Kei inspired Lolita outfits are not too bad, and things like PVC and chains can work nicely with Lolita, it usually takes someone very skilled and familiar with Lolita to pull it off without looking like some kind of cosplay, like the girls in the middle, their outfits are pretty damned awesome. 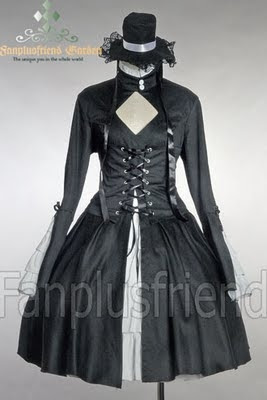 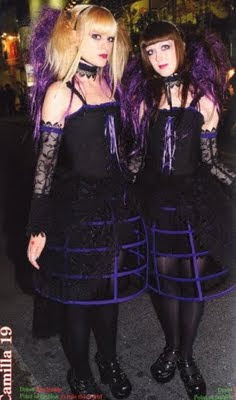 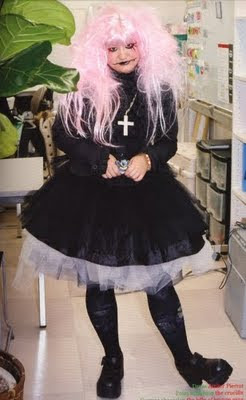 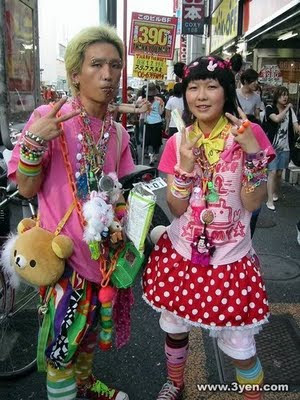 Fruits is probably the most well known Japanese street fashion. It is, for whatever reason, what you call the wacky any-thing-goes style that has become practically synonymous with Harajuku. It's really hard to put down a definition of the Fruits style, as it is pretty much about wearing as much neon and wacky crap you can find. While the style is hardly as popular now as it once was (Fruits? How passé!), it is crazy grandfather of many of the current Japanese fashion trends. And while it never really merged with Lolita, it is still worth mentioning as many of the old Fruits street snaps feature kids with either Lolita pieces in their outfits, or outfits that are indeed very Lolita in nature, pink and girly and fluffy. Think of it as sort of the opposite of the other fashions here, instead of Lolita taking cues from Fruits, Fruits took a few cues from Lolita. Note: Fruits is not a term used in Japan, it is just the name of a magazine featuring street style snaps. In the west general wacky street style became known as Fruits, and while it is not exactly a specific style, it's still worth mentioning as many western Lolitas in the early days would take ideas from the Fruits magazines. 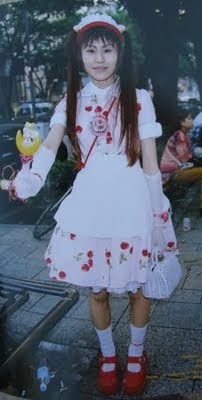 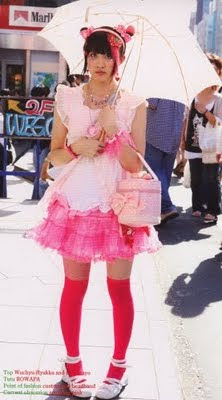 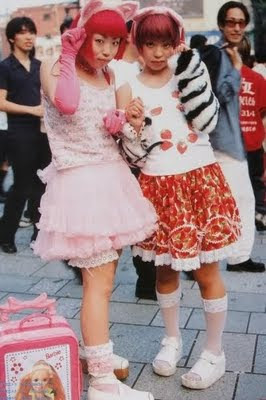 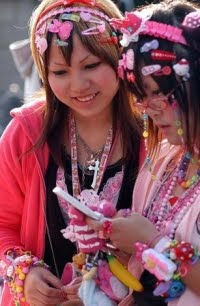 Decora, which is short for "decorate", sort of looks like the old Fruits fashion, except with lots of extra decoration. And these girls don't so much decorate as they do encrust themselves. Seriously. The trademark decora tends to be lots and lots of barrettes, with the hair often teased to fit in more barrettes. But besides just barrettes, rings are loaded onto fingers, colorful bracelets take up most of the arms, and necklaces are just layered on. This style is actually toned down a bit when it's merged with Lolita,but loud prints and color combos tend to make up for any missing barrettes and bracelets. Deco-loli is often much sweeter than normal Sweet Lolita, and the poofier the skirt the better. 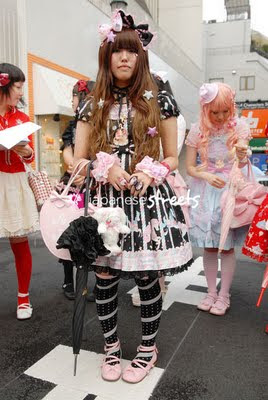 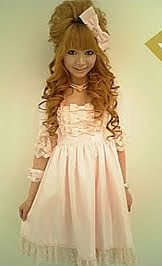 Hime Gyaru is like Lolita's rich cousin, who most likely used to be a Texas beauty pageant toddler and has grown up into some kind of ultra Peg Bundy. Hime Gyaru makes Lolita look affordable, considering your average Hime Gyaru brand dress is going to cost you $600. The point of Hime Gyaru seems to be spend as much money as humanly possible on one outfit. When combined with Lolita Hime Gyaru becomes Hime Lolita. The dresses become poofier, and believe it or not, less expensive. The trademark Hime beehive is often times kept, but sometimes traded in for other styles of big hair. The Lolita's big clunky shoes are often traded in for Hime styled open toed high heeled sandals. Hime Lolitas accessorize with tiaras, pearls, and opera length gloves, socks are often traded in for tights, or nothing at all. Satin details and even whole pieces are much more accepted in Hime Lolita than they are in regular Lolita. There are typically two differnt styles of Hime Lolita, the ultra princess in a Marie Antionette styled dress, or a more modern style that often involves a blouseless JSK. 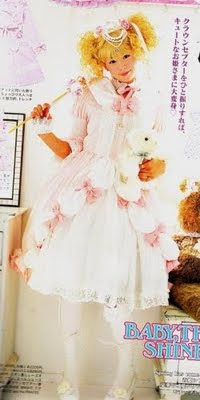 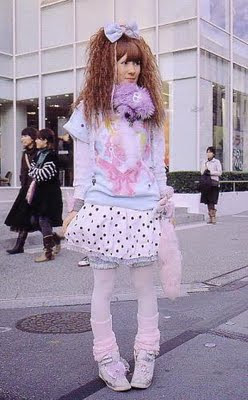 Fairy Kei is another style similar to the old Fruits style. Only it is a bit less neon and any-thing-goes, and more pastel and girly. The style is very much influenced by the 1980's, or rather the current interpretation of the 1980's. Carebears, My Little Ponies, Popples, and other nostalgic characters are often seen in Fairy Kei outfits, as accessories of their own or on prints. When combined with Lolita it tends to look like more of a Casual Lolita, favoring print tees and petticoats with minimal poof. While Lolita normally sticks to a couple color, Fairy Kei is not afraid to include the whole rainbow of soft pastel colors. Sheer and even sparkly fabrics are also often found in the Lolita/Fairy Kei mash-ups.
Lolita x Fairy Kei 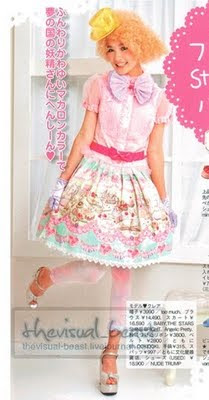 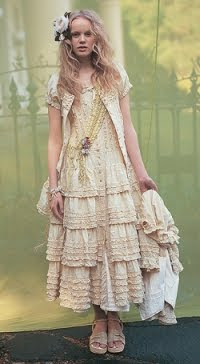 Natural Kei, or the substyle Mori Girl, is the current Japanese fashion trend that everyone is all up in. And there's little doubt why! It's very pretty and romantic, and such a change after years of super sweet Lolita trends. With the exception of Visual Kei, all the other trend mash-ups are better suited for Sweet Lolitas, but Natural Kei tends to follow the Classic Lolita aesthetic. Soft neutral colors, cozy layers, and romantic details are all part of the Natural Kei fashion, and when combined with Lolita these create an effect that is very down to earth but still beautiful. Skirts are often not as poofy in this mash-up, and plain cottons might be traded in for gauzy or textured materials. Ruffles replace lace, and prints, if any, are more mature, featuring floral instead of hyperactive cartoon characters. The clunky Lolita shoe is traded in for Victorian boots, and hair is kept messy or wavy, instead of perfectly curled and coiffed. Accessories take a cue from nature and feature flowers, leaves, and forest creatures.
Lolita x Natural Kei 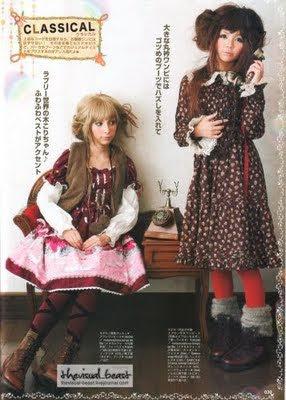 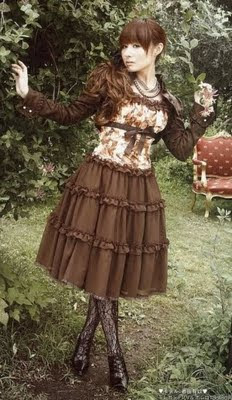 Every season or so Lolita seems to get a bit bored with itself and decides to spice it up a bit by taking cues from whatever trend is currently popular in Japan. What is next in store for Lolita trends is kind of hard to say. One could argue that the styles are getting more casual, less sweet, and more mature, but really, who knows what next season will bring? Just because the current trend is less sweet that the previous really means nothing at all. All I know is that I'm glad that Ganguro never caught on in the Lolita fashion. 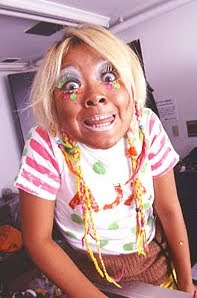 Ugh. Stay out of my Lolita, please D:
Edit: OMG XD I guess I spoke too soon. This was actually posted right before I posted this. And OMG I actually love it for how awful it is <3>
Posted by caro-chan