Mind Your Own Damned Manners 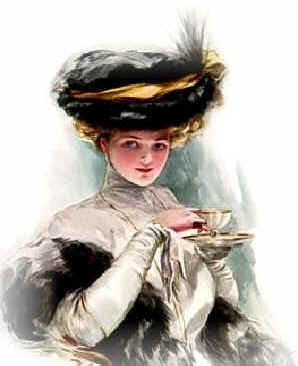 While writing about Emily Post's opinions on etiquette a few weeks ago, I got to thinking about Lolitas and manners. Many Lolitas agree that putting on the mantle of faux perfect manners every time you slip into your burando is a bit phony. But there are some Lolitas out there who insist that a Lolita without manners is hardly a Lolita at all.

Many who obsess over what manners you display while in Lolita like to say that you are out there representing the style to the world, so you better be on your best behavior or you're letting the whole team down! You wouldn't want the rest of the world thinking that those girls in pink fluffy dresses are a bunch of uncivilized, swearing, monkey girls who don't know what a salad fork is, now would you? Now, I must say, as oh-so politely as I can, that that mode of thinking is a whole lot of bullshit.

I came into Lolita from goth and have been dressing like an eccentric circus reject ever since I started dressing myself. From experience I can honestly say that most strangers are going to make all sorts of wacky assumptions about you and everyone who looks like you based on what you're wearing, not how you're acting. You could be the sweetest, most charming, well mannered girl out there, but strangers who pass you on the street are still going to think you're a Satanic Vampire Worshiper™ or a Japan Obsessed Adult Baby Sex Fiend™. Sure, the occasional person might question you about it, in which case you give them the standard "It has nothing to do with sex. Yes, I know what the book Lolita is about. It's just clothes" then they nod, pretend to be having a two sided conversation and then go on their way, but they are probably not going to change their opinion of what you are, if they even cared enough to form an opinion on you in the first place.

Since when are we, as Lolitas, supposed to care what other people think about us? I thought we were dressing this way because we liked it, to hell what other people thought. Since when did dressing however you liked all the sudden burden you with weight of all of Lolitadom's reputation? Be polite because you like to be polite, because you want to be a princess, because it's shocking, because it comes naturally to you, because you want other people to be polite, because it draws less attention to you, or because you know if you don't control yourself you'll spaz out and spill tea all over your new dress. But don't start stressing out over salad forks and tea ceremonies and the correct way to invite friends over for brunch because you feel like you are obligated to, and certainly don't ever point your finger in another Lolita's direction and tell them they need to start representing the whole Lolita community.

Mind your own damned manners, not anyone else's. You're not saving Lolita's reputation by trying to enforce old fashioned restrictions on others. Lolita is about being yourself, not about proving strangers wrong.
Posted by caro-chan