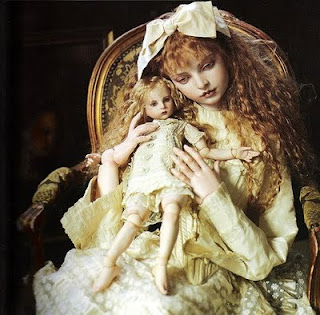 I own about two dozen Lolita dresses that will never, not in a million years, fit me. In color combinations and patterns that aren't really my thing anyways. And I just keep buying more. I can hardly resist when I've picked up some of them for $10. Then again, a few of them cost upwards of $100. Which, while it isn't a lot of Lolita, is kind of my limit for a dress that's only a handful of inches high. Yes, I'm talking about doll clothes, specifically Ball Jointed Doll clothes, BJDs if you will. I know, I can hear the moaning and groaning already! And rightly so. We're all sick of the silly “OMG I need a Dollfie to go with my new loli dress, how do I get one?” posts that have been popping up on the EGL community since the dawn of time. But, dammit, this is my blog, and I can hardly be expected to keep my mouth shut about my big, stupid, dolls.

A few Lolita brands, such as Baby The Stars Shine Bright, h.NAOTO, and the indies brand Milky Ange have made teeny tiny versions of their beautiful clothes specifically for BJDs. Typically such tiny versions of clothes cost the same as people sized versions. Or if they were sold as a limited edition, can end up on the second hand market at nearly double the price as a people sized version. I've seen a red and white BtSSB dress go for 400+ dollars on the forums. And h.NAOTO BJD sets are usually sold for around 300 bucks. Granted, they do come with shoes, socks, bags, and accessories, as well as the dress. But daaamn, do you know what kind of Brand I could buy for me for 300 bucks? One dress and maybe a skirt, if I was hunting it down on the second hand market... Okay, so I guess that's not really a good point... 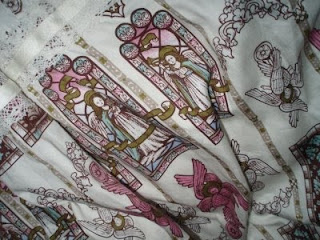 While I'm not one to carry a BJD with me to a Lolita meetup, I do tend to dress up in my Lolita finest at BJD meetups. And there are other obvious crossovers. I love to buy Lolita dresses for my dolls, and live through them a bit that way. I'm never going to wear something over-the-top pink and princessey, but I can give into that craving by dressing up a doll or two in one. I might feel awkward and uncomfortable looking like a bow encrusted cupcake, but my dolls aren't going to be complaining anytime soon. While Lolita seeps into and takes over my BJD hobby, BJDs tend to stay out of my Lolita wardrobe. Or so I thought! One of my most favorite of all Lolita prints is Baby's Stained Glass series. Which I later found out is illustrated by the famous BJD artist Koitsukihime. And if I ever found a Lolita print with a BJD styled doll on it I would probably snap it up really quick. I've actually been thinking about designing my own border print fabric featuring one. But who knows if I'll ever get off my butt and do that.

This is just a quick “Me and my dolls, BFF Forever” post, but you can expect some more ramblings on the oh-so-thrilling topic of dolls and Lolita from me in the future, I didn't actually mean to make two in a row. I promise further doll ramblings will be quick and painless! I do plan on rambling in a bit more detail about various Brands ventures in doll clothes, so be warned of that!