For the past several years, unique prints have been a pretty big defining feature for brands, and for many people was the thing that drew them to the fashion. While there have almost always been unique prints, they were usually understated until the pastel-dancing-bunnies-riding-rainbows-made-of-unicorn-hair Sweet Lolita explosion happened, and after that it seemed like even the other styles were trying to come up with the next bigger and better print. With the rising interest in Classic Lolita it's no surprise that the next big print trend came from Juliette et Justine, a brand that is undeniably Classic.

Sometime last year or so Juliette et Justine released a dress that pretty much rocked the Lolita world featuring a full all-over print of a classical Rococo painting. They were not the first brand to release all-over prints featuring classical art, but they were definitely the brand to turn it into the next big thing. 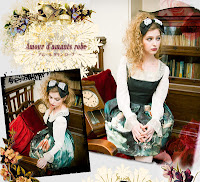 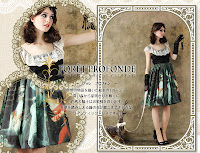 Other brands have started to jump on this bandwagon too! Moi Meme Moitie recently released Sleeping Garden, which features an all-over print of a photo of a graveyard. Not exactly the same thing as classical art, but it's hard to deny the similarity. 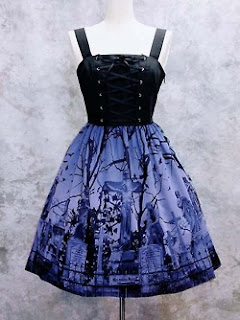 Am I the only one reminded of Sopor Aeternus by this print? I think it's the name that does it.
As I had mentioned, Juliette et Justine was not the first brand to release prints along this line. The Otome brand Jane Marple has actually released several pieces that feature large art prints, a recent one featuring what I think is an angel, but there have been a few other religious prints in their past, and even one featuring a very fancy piano. 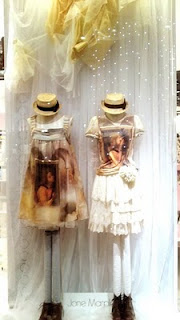 Jane Marple does the classic art thing quite nicely.
So what if I can't get my hands on some of these hard-to-find, very-expensive dresses?
Headed right on the tail of this trend is a trend for classical art tights, believe it or not. Nearly all of the tights you are seeing on Lolitas (and Dolly Kei and Cult Party Kei enthusiasts!) both over here and in Japan are actually from a US based tights company called Celeste Stein. There are literally hundreds of different designs to choose from on their site, but only a handful of classical art prints. If you don't have the several hundred dollars to spend on the brand dresses, you can pick up a pair of these tights for between $19 and $32, depending on the type of material you choose! I think that's a pretty good deal for such an awesome pair of tights, and a pretty cheap way to hop on this otherwise expensive bandwagon.

So how the heck do I coordinate something like this?
Those out there who are not particularly fond of these classical print pieces often say it's because they look incredibly hard to coordinate. Personally, I think with a piece like one of these, it's sort of best to go all-out. I've seen the art tights, paired with Juliette et Justine's art print dresses and it looks absolutely fantastic! 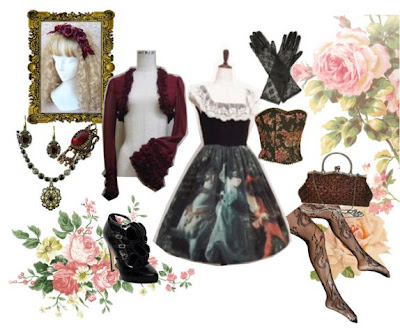 Here's an idea how to coordinate one of JeJ prints in a more over the top way, with contrasting prints and a variety of different textures and colors. I love seeing Classic pieces coordinated in a sort of haphazardly opulent way. Check out some of the Classic Lolita coordinates on the Flasco blog, or some Dolly Kei coordinates for some ideas on how to make pieces that don't necessarily match work together. 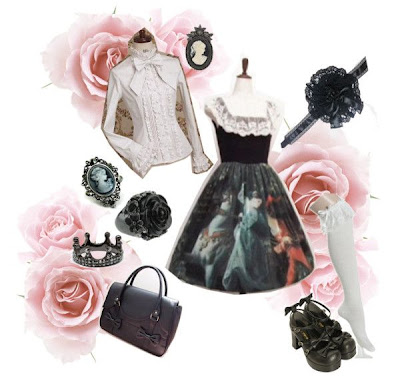 If you're looking for a slightly simpler way of coordinating a print like this, you can always just coordinate it the way you would any other black and white Classic Lolita dress. Some typical cute Lolita shoes, lace-topped socks, a high necked collar, and topped off with a more elegant headdress option you can show off the print on the dress without drowning it in opulence.
So what do you think of these prints? I am a bit late on reporting on them (I am a bit late reporting on a lot of things! As you can tell by the sad update schedule of this blog lately. Sorry about that!) but in the mean time I've been pleased to see more pieces along these lines come out and the Moitie dress be released. Personally, I really love these dresses, I think that there are so many possibilities for fun coordinates with a piece like this, and it's very refreshing to see prints finally start to go in a different direction from the somewhat formulaic Sweet Lolita prints that have been so prevalent in the fashion for the past several years. On the other hand, I can see how quickly a print trend like this would get old fast, probably even more so than other print trends since there are not as many color options as other prints. You're pretty much stuck with the colors in the painting, so there's not even different colorways to pick from to fit your own personal style. Then again, Juliette et Justine's more recent Jupe du Château comes in several different colors, so I guess we'll just have to see where this trend goes!
Posted by caro-chan