The Documentary about You-Know-What

Unless you've been living in a cave, and your cave doesn't have an internet connection, I'm sure you've all heard about a certain documentary featuring a Lolita on the promotional poster. If you've just emerged from your cave today, and my blog was the very first site you decided to check up on (I'm flattered!) then let me fill you in a bit: A few days ago, word hit the Lolita community that a documentary called "Are All Men Pedophiles?" about, you guessed it, pedophilia and the sexualization of youth. What makes this documentary different from the dozens of other documentaries about similar topics is the controversial name and the fact that one of the promotional pictures features a well-dressed Lolita with the title of the film emblazoned across the bottom of the image. 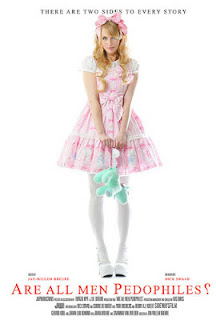 Fun fact: A backwards question mark is used to denote irony, sarcasm, or a rhetorical question!
It goes without saying that this upset a lot of Lolitas. Again, assuming you've been living in a cave, you're probably more than familiar with the fact that the biggest argument against Lolita is the fact that the fashion is called "Lolita" combined with the fact some styles of it are childish looking to many people, leading people to jump to conclusions about all sorts of devious activities that they think Lolitas are up to. But, this isn't going to be a blog post about why it's simply wrong to assume these things about Lolitas, because we all know that by now. Instead I'd like to talk a little about the documentary and my thoughts on the community's reaction to it.

I'd like to begin by saying that when I saw the poster, I cringed at it. My first reaction was "Oh god, I hope no one I know sees this poster!" because I don't exactly look forward to making the Lolita-has-nothing-to-do-with-pedophilia speech. My second reaction was "Well, doesn't that sound controversial?" and, wouldn't you know, a quick hop over to the documentaries site has this quote:

Ah, it's one of those documentaries. Anyone who watches a fair amount of documentaries has probably come across them many, many times before. Documentary makers just love being controversial. And why not? Controversy gets talked about, and talking leads to watching. Of course though, no one likes to actually be part of the controversy, so it's unsurprising the Lolita community reacted the way it did.

Scores of Lolitas were so upset by the mere appearance of a Lolita in a documentary about pedophilia that a petition was actually started, Lolitas were urged to send emails expressing their anger to the documentary's maker, and there were even people discussing actually showing up to the premier and protesting, in Lolita of course.

Frankly, I think these are all really bad ideas.

Let's get the most obvious bad idea out of the way first: this documentary is intended to be controversial, therefore, it is probably thriving off the controversy that many Lolitas are throwing at it. I can easily imagine that the petition Lolitas have started with end up being quoted, by the makers of the film, as being one of the big selling points of the film's controversiality (um, is that even a word?). To have a group of Lolitas show up to the premier to protest this film would probably be one of the best thing that could happen to this particular film in terms of advertisement. In a case like this, for a film that is billing itself as "The most controversial film ever made", if you want it to go away, your best bet would be to ignore it and to not actually make a controversy of it.

The other reason why I think this is a bad idea is really more of a personal opinion of mine and it has to do with the petition and those who hope that enough strongly worded emails will make the filmmakers to reconsider even releasing the film. Personally, I think it's wrong to try to strong-arm someone into doing or not doing something just because you disagree with it. It is the film maker's right to make a film voicing their opinion about whatever they want, and I feel it would be morally wrong to stop them from saying whatever they want, in whatever medium they choose, just because I, or anyone, disagrees with it. Yes, even if I feel like their opinion is wrong or misleading. They have every right to make the film, just as I have every right to don a fluffy dress with cupcakes on it and carry a purse shaped like a rabbit head to go grocery shopping in (Incidentally, I actually own neither of those things, my dresses mostly have flowers on them, and my purse is shaped like a bat).

I also am obviously part of the minority in the Lolita community that doesn't believe this film should never see the light of day for fear that it might make people jump to conclusions about the Lolita fashion, as if they don't already, and I debated whether or not I should even make this post because I just sort of didn't want to get involved. But I guess I am involved, even if just because I do wear the same style of clothes of a girl on a poster, so there's no sense in pretending as if I don't have an opinion on the matter.

So, instead of urging you to sign a petition or write angry emails demanding a film not be made, I'm going to urge you to take a deep breath, and just calm down. If you don't like the idea of the film, complain to your friends about it and then don't watch it, but don't try to stop it from being shown because you disagree with it, or even worse, show up to the premier dressed like the movie poster proclaiming just how controversial this self-proclaimed controversial film is. There are plenty of times when petitions and protests are 100% appropriate if you disagree with something, but I do not believe that this is that time.

What are my thoughts on this particular film? Like I mentioned above, the self-proclaimed "controversy for controversy's sake" angle really turns me off of some films, but if it wasn't for that, based on the trailer it just looks like any other documentary about the subject, and I really don't see a reason to hate it, or even think it's somehow "more controversial" than any other documentary out there.

Again, I'm not going to urge you to sign any petitions, or even to agree with me, I'm just going to urge you to give it two seconds thought and be reasonable about whatever your actions are. If you don't agree with the film, and dislike the use of Lolita in it, that's perfectly fine, but maybe you should give it a second thought before you really do turn an unknown film into the "most controversial film ever" that it hopes to be.

You can check out this page on EGL, which links to the various topics that were posted on the subject of this film, including the petition. You can also check out the film's website here, because if you haven't yet, and are considering signing a petion or demanding that they change their film to suit yourself, I hope you've at least learned all you possibly can about exactly what it is you're trying to stop.

Post Script: I didn't want to go into this, because at this point it is only rumor, but since people keep mentioning it in the comments I may has well.  In regards to the model supposedly being tricked into doing the photoshoot: as far as I know the model has not actually said anything at all about her modeling for the poster. There are also two different stories I have heard, one saying the model was told the photoshoot was for a fashion spread, and one saying that there were actually a group of Lolitas who were going to pose for the photo, but after hearing what the movie was about, they all dropped out but her. However, I don't know if either of these rumors are true, and I'm not going to make any assumptions based on what is just a rumor at this point.
Posted by caro-chan