Ask Miss Caro-chan: Where Are The Lustrous Fabrics?

This edition of Ask Miss Caro-chan comes off my formspring from an anonymous asker, who wants to know:


What's with the lack of shiny fabrics in Lolita? I don't mean cheap costume satin, but lustrous silks and brocades and such. It seems that, since Lolita is inspired by luxurious and opulent fashions, it should include more than just cottons!

I just want to start by mentioning that not all Lolita fashions are inspired by the luxurious and opulent! Lolita is actually inspired by many different things: cute, charming, old-timey, retro, are all just as equally inspiring to Lolita as opulence and luxury.

There are actually a fair number of pieces being sold by brands that are made with shiny or lustrous fabrics if you know where to look! Out of the big brands Baby's Alice & the Pirates line is probably the most well known for releasing a lot of shiny pieces. You can almost always find some blouse or dress made out of some lustrous fabric in their shop! 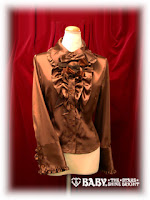 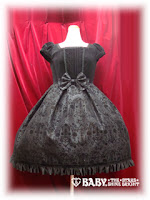 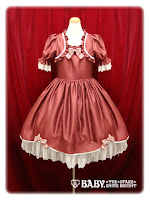 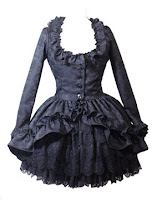 Brocade helps break up the shine a bit and adds even more opulence. It also tends to come in a variety of different shine strengths.
Atelier Pierrot

Atelier Pierrot's single most popular design, that they have been making since the dawn of time and releasing in a rainbow of jewel toned satins.
If you want some luster in a way that's slightly safer than satin you can always try velvets! Velvets are a very lush way to add a slight luster to your wardrobe and, depending on the piece, can either be worn as a knock-out piece or something a bit more casual. Go for a more detailed OP in an interesting color, such as jewel tones or dusty pastels, for a fancier look or a simpler skirt in a more "traditionally" Lolita color, pastels, bold colors, or basic black or white, for a more casual way to wear velvet.

In the cooler months, nearly every brand puts out velvet pieces, and they can usually be picked up year round on the second hand community, so it's never really a difficult task to find a velvet piece to add to your wardrobe. 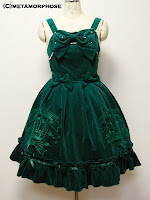 These pieces are all definitely show off the more opulent side of velvet!
Satin's Bad Rap and the Difference Between Shiny and Lustrous.
Similar to black and white color combos, satin or other lustrous fabrics have been done badly so many times and for so long that it's almost a knee-jerk reaction to automatically dismiss any lustrous fabric as "bad". But, just like with black and white, when shine is done correctly, and out of good fabric, it can be a gorgeous option for Lolita.

Spotting good vs. bad satin is sometimes hard to do in pictures. Usually it seems that cheap costume satin tends to be more contrasting, it has darker shadows and brighter highlights, you can even sometimes tell how thin the fabric is by the way it hangs or the fact that it is already covered in wrinkles just by existing. High quality satins often seem to have a more gentler shine and you can often tell by the draping of the fabric that it's a much more heavy weight fabric. If you have the chance to see the piece in person, cheap satins are usually incredibly thin (they're often almost tissue thin!) and incredibly easily wrinkled, whereas better quality satins are usually very thick and sometimes even textured. 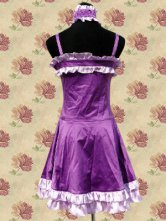 I'm a big fan of using lustrous fabrics and details within Lolita, I love the extra bit of depth and interest they add. I've mentioned before about my love of texture and detail that many Lolita pieces have, and I think that lustrous fabrics is just another way to add interest to a piece without exploding a rainbow print all over the dress and piling on the accessories.
Posted by caro-chan