What Goth Has Taught Me About Lolita. Plus: More Meme!

While it might not be apparent from this blog, it being a Lolita blog, but regular old Goth has always been my first love. It started growing up around movies such as Beetlejuice, The Addams Family, and Edward Scissorhands, and then finally manifested sometime around 8th grade when I got my first pair of black stompy boots and started wearing my younger sisters old witch Halloween costume as a blouse (to be fair, it was a black 1970's era silk dress with billowing sleeves, not an off-the-Walmart-rack kids costume). While I have been something of a poor Goth for the past 4 or so years, having pretty much given up a mostly Goth wardrobe for a strictly Lolita wardrobe, it still holds a special place in my heart. Nowadays, the closest I really get to actually looking like a Goth is Gothic Lolita but I still love to, I guess you could say, "Live the Gothic lifestyle", which is pretty apparent by my questionable tastes in decorating, a predilection towards gloomy music, and a general all-around enjoyment of the spooky and macabre.

The point of all of this is that I came into Lolita no stranger to standing out in a crowd but being part of an alternative subculture. By the time I got my first "Hey little Bo Peep!" shout from a stranger I was already an expert at dealing with "Hey Elvira!" calls. I feel that coming from a Gothic background, if you will, had really made me prepared for anything Lolita could throw at me, from cat calls, to internet drama. Some of these things should be common sense, or are things most Lolitas eventually figure out on their own, but these are all things that Goth taught me before I even donned my first petticoat. 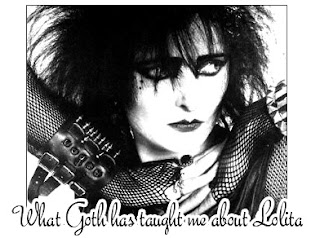 Despite some overlap in the aesthetics and interests, the Gothic subculture is pretty far removed from Lolita(Arguments of "Lolita is just frilly clothes!" vs. "There's more to Goth than just wearing black!" for starters) but I still think they can learn a lot from each other!

I had mistakenly credited one blog for coming up with the 30 day Lolita challenge, but it turns out it was actually posted on The Random Lolita, which is actually a blog I'm quite fond of (and this has nothing to do with the fact she's wearing one of my bonnets in her banner : 3), but I've been out of the blogging loop for the past month so the original post completely slipped past me!
I'm really loving this challenge, not just because it gives me an excuse to use some silly .gifs and super-kawaii lolita blog graphics, because it's a nice mix of personal and typical Lolita questions and it gives a little sneak peak of what the person is like without all their frills.