I was getting my much needed dose of Lolita news when I stumbled across a picture of Baby's newest print and was completed delighted to find that it featured my favorite animal in the magical animal kingdom, the Unicorn! I really don't understand why unicorns aren't a more common theme in Lolita prints, they are pretty much the perfect Lolita animal- they're magical, they're elegant, they're a princesses best friend, and they can come in rainbow pastel colors, what more can you ask for? But, for whatever reason, very few Lolita brands, indie or otherwise, have even ventured into the magical realm of unicorns. Metamorphose's Twinkle Journey is pretty much your only big brand unicorn release, and the indie brand Pink Macaroon has released a unicorn themed print, but that's really your only options when it comes to unicorn-centric Lolita prints. But now we can finally add another unicorn print to our closets since Baby has decided to finally bust out some unicorns with Unico in Bloomland. 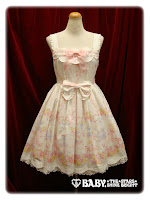 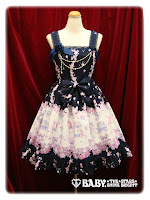 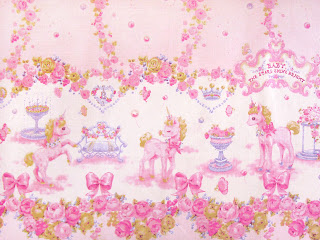 Unico in Bloomland comes in a few choices, two different styles of JSK, a skirt, a pair of print socks, a headbow, and even a printless blouse meant to complete the set. Printwise, I think this is completely adorable, it includes Baby's typical flower swag garlands, bows, crowns, and other more elegantly styled motifs, as well as a liberal splashing of pastel pink baby unicorns. While this is sort of their trademark style (of the moment) it does get a bit boring sometimes, as the general print layout is very similar to a number of prints they have done in recent years, but really, the unicorns make up for that. So much so that the pink version is really tempting me as being one of my very few "fancy pink prints" for the rare occasion when I feel the need to go out in all pink. But, perhaps I'm letting myself get carried away with uniconlust.
What do you think of this print? Does the mere fact that it's covered in little pink unicorns make you want to bust out your wallets and throw money at your computer screen? Or maybe it's just not your style? It is awfully pink and adowabuwle, and I do think that unicorns can be so much more than just cute fuzzy animals. 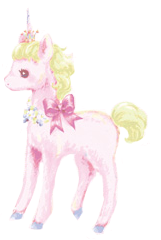 More of the 30 day Lolita meme! I obviously haven't been doing of these every day, so I'll just be grouping a few of them together for missed days whenever I post. This way this meme wont drag on for half the year, and I wont have to bore you with daily posts about silly meme things!
Day 6- 10 things in your Lolita wardrobe you can't live without.
♥ A black chiffon petticoat, setting this day's unintentional theme of black Lolita clothes! ♥ Simple black underskirt because without it so many things would be too short! ♥ A comfy h.NAOTO cutsew to throw on over JSKs on lazy days ♥ A big black head eating bow ♥ My black and pink crown emblem Emily Temple Cute purse ♥ A pair of simple black Tea Party knockoffs that I can throw on and pretty much match everything, they're comfy and I don't have to worry too much about wearing them down to the soles ♥ Lacy tights, for extra fancification and when I can't find matching socks ♥ Bloomers! ♥ My Stained Glass print skirt, I just really really love that print! ♥ My very first brand dress, a black BtSSB shirred JSK, it's comfy, fancy, and can work it's way into just about every Lolita style out there! ♥
Day 7- 10  5 people who inspire your Lolita style
I think a lot of people are finding this day very difficult! It's so hard to pick out 10 people who you know inspire you, inspiration sort of comes from all over! So instead of 10 Lolitas, here are 5 Lolitas who's style I find very intriguing, I might not draw direct inspiration from them (that is, wear clothes because they do), but I certainly admire them and their styles!
♥  Sachi from Kokusyoku Sumire ♥ Maria of Paperlace ♥ Hitome of Grimoire fame ♥ Martha of Mossgarden ♥ Mana, by no means am I a Manatard, but the dude's got style ♥
Posted by caro-chan