Lolita is known for having some ridiculous trends, everything from wearing hats hat look like cakes or melted ice cream headdresses, to pastel afro wigs, to mismatched shoes, to even the more mundane trend of encrusting everything you have in rhinestones and fake whipped cream. So, I got to thinking, is there anything that might be just a bit too weird to become a Lolita trend? I hope you don't mind this no-I-am-not-serious (so no hate mail, please!) prediction at a few trends that I really hope don't plan on hitting Lolita anytime soon. Well, maybe I wouldn't mind some of these! 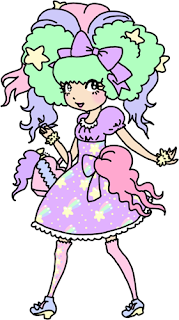 Wig overload!
With the wig trend at it's peak, wig enthusiasts will start to look for ways to wear all their wigs and hair falls all at once. It will start with wearing more than 2 curly hair falls on your wigs at one time, Lolita's will start clipping at least half a dozen wig falls onto their base wig. Soon a famous Lolita model is spotted in a Gothic & Lolita street snap with one of her falls clipped to her purse, and another clipped to her waist-tie bow, and yet another wrapped up around her wrist. The rising popularity in the new My Little Pony cartoon will cause Lolita's to exclaim "OMG! It looks like she has a pony tail growing out of her butt! THAT'S SO CUTE!" and Lolita's everywhere will at least start clipping their extra wig falls to their purses and to their waist ties. Brands will soon release big detachable butt-bows complete with an attached pony tail, and smaller pony tail purse charms. Some will complain that the trend makes us look like furries, but no one cares because we all are too excited about My Little Ponies to give a fuck.

Super hero styled capes.
Not necessarily capes in general, or those fancy historically correct Rococo cape-ish things that are on the back of Baby's $800 super special dresses, but capes that look a bit like a super hero cape. For some reason, it starts becoming popular for Lolitas to don frilly, lace edged capes that tie in the front in a big ruffly bow. Soon enough, brands start putting out capes that feature their logo or a cute screen printing from their most recent print on the back. Many arguments break out because a lot of Lolitas find it "too costumey". The trend eventually subsides and super hero Lolita capes are generally only worn around Halloween, or at meetups that involve going to the newest comic book based movie.

Wearing a fancy bra outside of your clothes.
A trend like this- completely ridiculous, mildly offensive, and just so out of left field- I can only imagine Metamorphose starting. Perhaps one day, on their site, they offer a Lolita-esque bra, it's really cute and ruffly, and everyone loves it, but for some reason it's being modeled on the outside of a blouse. Are they asking us to wear it this way? Did they just not feel like undressing their mannequin? Are they trying to troll us? Whatever the answers might be, the trend catches on and a few daring Lolitas start wearing fancy bras over their clothes and then next thing you know, you can't go to a meetup without at least half the Lolitas there wearing bras on the outside. Arguments will break out on EGL, with anti-outside-bra complaints of "It looks like you're trying to be the other kind of Lolita" while pro-outside-bra supporters will remind everyone that they are wearing a bra under their outside bra, so it's not really their underwear that everyone is seeing. 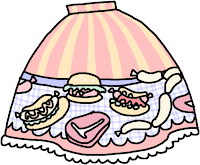 Kawaii meat prints.
Sometime this Summer, Angelic Pretty will discover the traditional picnic or cook-out and will fall in love with plaid tablecloths, cute country styled plates and cutlery, and even potato salad and hot dogs and hamburgers. They'll release a border print featuring cute cut crystal bowls piled high with potato salad, links of sausages piled up on china plates, juicy hamburgers stacked 3 patties high, and hot dogs with a squiggle of glittery golden mustard going down the middle. Of course, everything will be printed in pale pastels, creating a nauseating raw-hamburger and un-cooked hot dog effect. But Lolita's will eat it up (har har) anyways and the next thing you know Baby will be putting out a sort of retro styled print with hot dogs and hamburgers and Innocent World will be releasing a print featuring a fine line drawing of marbled T-bone steaks. 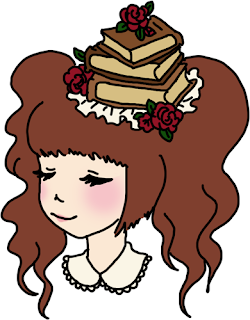 Over-the-top Classic book hats
I imagine a brand like Alice & the Pirates or Juliette et Justine would start this trend. They would release a really fancy, really expensive, book hat and everyone would have to have it, but it would be too expensive and too daring for all but the most courageous Lolitas to try. Crafty Lolitas would figure out a way to make their own versions of book hats using either old books (and a lot of neck strength!) or those cardboard fake book boxes you can pick up at home stores, a tutorial would hit EGL and then everyone would rush to make their own. 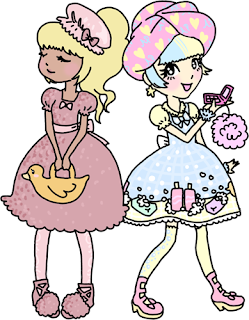 Bubble Bath Lolita
Baby will release another version of those weird terry cloth material dresses and a famous Lolita model will appear in a G&LB street snap wearing it with a pair of fuzzy slipper shoes, a cute little shower cap tilted at an angle, and carrying a cell phone with a bath pouf clipped to it. Soon everyone will start buying up Baby's terry cloth dresses and wearing them with cute shower caps, the less daring will simply clip pastel bath poufs to their purses and cellphones. Shortly after, Metamorphose and Angelic Pretty will each release a bubble bath themed print and a matching colorful towel, both of which will sell out almost instantly. A more "toned down" version of Bubble Bath Lolita will appear, which just involves wearing a bubble bath themed print and wrapping a cute towel around your hair. Arguments will break out over who is the real Bubble Bath Lolita. Baby terry cloth dress purists will exclaim to the print lovers "There's nothing bubble bath about your outfit at all! You're just wearing a print and have your hair wrapped up in a towel! you look stupid!", and the print lovers will exclaim "You look so boring! Your shower cap looks more like grandma's night cap! You look like grandma shuffling around in a bathrobe!" The trend eventually dies, but Lolitas continue to clip bath poufs on purses and cellphones. Two years later, Bodyline releases a bubble bath print dress for $15, EGL is flooded with noobs asking how to coordinate it in a proper Bubble Bath Lolita coordinate.

Chimney Sweep Loli
A photoshoot posted to EGL of a Lolita in an all white outfit, adorably smudged with soot, this becomes a huge hit. Lolita's soon start snapping up cheap white Lolita dresses with the intent to cover in artistically placed smudges of soot. Cute little soot hearts are drawn on cheeks. This trend soon dies out as Lolitas find that the soot has managed to get all over their white blouses, white socks, shoes, purse, and just about everything else the dress touches, ruining much more than the cheap white dress they intended. EGL is flooded with "How do I get soot off Angelic Pretty prints if I can't wash them!?"

So, these are my ideas for trends that might be too wacky even for Lolita! True, some of these might work, the book hats and bath pouf cell charms and maybe, if we're really lucky, the pony-tails-on-your-butt. Who knows though, someone might prove me wrong soon enough! Lolita always manages to surprise me with it's sometimes completely strange trends. Trend that, I must admit, I sometimes find myself falling into as well. It's just really hard to resist something that's completely out-there but everyone else is doing too!

Do you think super hero capes and soot covered dresses could be a possibility in Lolita? Or do you plan on rushing  to clip your extra wig falls onto your butt? But, what I'd really like to know, is what kind of weird trends could you imagine being the next big thing in Lolita? I'd love to hear your ideas! I'll be making a list of all the best ones to add onto this entry!