Lolitas Who Break The Mold: Joey

Welcome to my first edition of Lolitas Who Break The Mold, which will be a series of interviews with Lolitas who, well, break the mold on what it is considered to be a Lolita. People who have made the style work for them, or Lolitas who are just generally very creative. The first interview is with Joey, who is a bit of a rarity in the Lolita scene, a Brolita. For those unfamiliar with the term, it's exactly what the name implies, a boy who dresses in the Lolita style. Not boystyle, but the all-out frills and petticoats of Lolita. 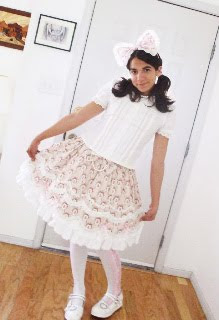 First of all, tell us a little about yourself!
Well, my name is Joey. I am a brolita, obviously, and I dress in sweet Lolita. Outside of lolita I am a high school senior of 16 years of age (I skipped 8th grade) who is going into college next year, University of New Mexico to be exact, and getting a degree in Asian Studies (minor in Chinese Language). I then want to get my masters from Yale and become a professor. Life brief is over… now.

How did you first discover the Lolita fashion? How long was it before you discovered it before you actually wore it?
Although I know it is taboo, I first learned of Lolita through anime. Not like “I saw MisaMisa and was instantly in love” but more like I was just looking online at anime-y stuff and was like “What is this Lolita I keep hearing about” and then I fell in love. I also saw Kamikaze Girls soon after that which made me fall head over heels in love with Baby, the Stars Shine Bright. I discovered the fashion in 2006, I think, but I didn’t wear it until 2009 so that is three-ish years of research, pining for brand, and desperately attempting to improve my sewing skills before I brought my first pieces. Although I had been collecting like random accessories and sweaters/socks/whatever else that was loliable so that when I finally dressed loli I wouldn’t start off as an “ita”.

Did you ever have any doubts about wearing the fashion when you first discovered it?
To tell you the truth, no. I mean, there were times when I wished that I wasn’t a boy so that it wouldn’t be so hard, but thinking about giving it up? I think not. That is not to say that its always been easy, it hasn’t, but I pull through.

I think the only time I ever doubted it was maybe for like a week when I fell in love with Dollfies and gave up all wish to buy Lolita so I could buy one, but then I came to my senses and realized I can’t wear a doll, now can I?

How would you describe your own personal Lolita style?
I think my style is very much about wearing clothes that make me feel like a princess (not in the superficial, ‘I want to be pampered’ kind of way necessarily but in the ‘I have power over the aesthetic values that dominate my life’ kind of way: my clothes being my main form of controlling those aesthetics). My style is about being original and cute and feeling like I am pretty, mostly. Bad description but I guess I never thought about it much before.

Do you have a dream dress or dream coordinate?
Well actually, I am desperately in love with Meta’s Swan Lake JSK in pink. I saw it one day and for some reason I almost died. It was so beautiful. I still hope to get it…

Do you have any style icons? Are there any Lolitas or fashionable people that you admire and are inspired by?
I really love Nana Kitade’s style. I think what is so great about it is that she isn’t afraid to take risks and show that she can be a real person. I love that you can see that ‘rocker chick’ style in her clothes still coming through and I hope that like her I can be a beautiful Lolita but still be who I am. 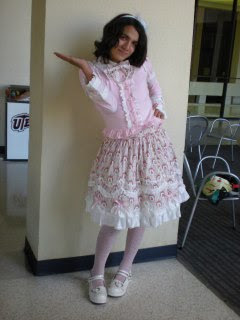 Do you participate in Lolita meetups? Or are you more of a lone Lolita? Tell us a little bit about your favorite meetup experiences or your favorite place to wear Lolita.
I live in New Mexico, so my community is an eentsy teensy little thing but there are three lolis in my area that I’ve had a few meet-ups with and we’ve had some good times going out to eat, going to a tearoom, or out to take some pictures at a duck pond. They are all really sweet girls and I really love how kind and welcoming they’ve been to me since day one! Thanks, girls!
I have to say that my favorite meetups have been at cons! I love to hang out with my pre-loli friends and goof around and nerd out and then get to go eat sushi with some loli friends and… well, goof around and nerd out.

I really like wearing Lolita to the tearoom in my hometown. I felt like the woman that owned the place was really surprised (in a good way) to see a group of girls (or so she thought) dressed so elegantly/innocently and coming to enjoy a nice cup of tea and a finger sandwich. It was a really very comfortable setting.
Have you ever considered dressing in any of the Boystyles? Or was it straight to the frills for you?
Straight to the frills for me! Whenever I see boystyles I think of my sister (who I think would look much better in them than I) and something that I think is nice but just not for me. I love the huge, poofy skirts and lace and frills and pink and creams and whites and although I would try it out if it was offered for me to, I don’t actively ever really think about doing any of the boystyles.

How do people treat you while you are in Lolita? Have you found that fellow Lolitas are more or less accepting than others?
People on the street pretty much treat me like any one of us weirdos in frills: like a weirdo in frills. I am usually thought to just be a strange girl so I don’t really get like gay-bashed or anything. I think that there is a lot of variation in the way other lolis feel about me. There are those who just don’t really care if I’m a boy or girl as long as my cords are good and they tell me that, and then there are those fangirl fans (whom I totally adore, keep up the lovin’, girls!) whom essentially love me no matter what and then there are those who truly think that I have no place in the fashion.

Sometimes I get worked up over the negativity that sometimes happens and I know I should hold my tongue but I tend to think about it as more of them being against me as a person (which I know they aren’t) and so I get a little OTT angry and say some mean things, but I really am a nice person who is open to everyone’s opinion.

How do you dress for your figure? Do you have any tips for other boys interested in buying flattering Lolita clothes for the first time?
I really try to disguise my flaws while accentuating the parts of my body I like, the same with any girl dressing in Lolita, a boy has to know how to dress his body.
Firstly, do not purchase until you can tell the difference between ita and Lolita. If you, as a boy, post a picture in ita-wear they will rip you apart and think you are into fetishy stuff or ageplay. Research first, then purchase.

Secondly, cap sleeves, cardigans, and high collars really disguise many of the main areas that men have problems with: shoulders, arms, and neck.

What about hair and makeup? Do you do anything special while in Lolita?
Due to my many years of not being a girl, I’m kind of new to makeup and hair, although I do try to do something special.

Makeup should really just be natural, maybe a little mascara or lipstick to accentuate your features, but you don’t want to look like a drag queen, you know?

I can only speak for my own hair which is thick, naturally wavy, and longish/medium-length but I think nicely done delicate curls (keyword: delicate. If you make super tight, Shirley Temple curls, they can look a little ageplay-ish) are really nice at framing the face and a little swooping bang makes your hair look more feminine. Also, I can pull of pigtails with my kind of hair and facial structure and I think with a little natural curl at the end they look really nice if you bring them to rest in front of your shoulders.

Biggest thing: experiment. Do hair and makeup and look at yourself in the mirror, if you don’t like it, chances are it doesn’t look good so try again. It should be fun!

Do you have any other advice for other boys looking to start wearing Lolita?
Just go for it. Do it for yourself. Love yourself. No matter what people say, you can do it. Believe it.

Love the clothes and don’t get involved in the drama. That can really be advice for everyone, actually.

And finally, what is your motto when it comes to wearing Lolita?
Good, Better, Best, may you never rest, until your Good is Better, and your Better Best.

A quick thank you to Joey for willing to be my blogs first interview! And another thank you to everyone who has sent in requests to be featured. I am finally getting around to sending out questions, so if you were interested, keep an eye out for my questions! And to anyone who missed the first post, this will be an ongoing feature, so check out this post if you are interested in being a featured Lolita on F Yeah Lolita.
Posted by caro-chan

Email ThisBlogThis!Share to TwitterShare to FacebookShare to Pinterest
Labels: brolita, interview, lolitas who break the mold