If you haven't picked it up from the occasional mention, and this meme I did, I am a huge fan of the cello-rock band Rasputina. Now, they are not for everyone, so I wouldn't suggest that you go out and buy their whole discography, but I, personally, can't get enough of them. When I first really got into Lolita, the song AntiqueHighHeelRedDollShoes instantly reminded me of the style. I don't quite know why it always reminds me of Lolita, maybe the bitchy tone of the song, as Lolitas are often infamous for being bitchy on the internet (something I think that we are wrongly accused of I might add). Or, maybe it's the line in the chorus "Daintier, smarter, better dressed" which is sort of the ideal Lolita, even though it may not always be true.

So, in honor of the song that I love so much, here is a coordinate based around it. Ever since hearing that song, so many years ago, I've really wanted a pair of red Victorian boots to wear with an all black outfit. A few red elements are thrown in to give it some balance, but really, I'm not so much going for a black and red outfit as I am a black outfit with a few red details. 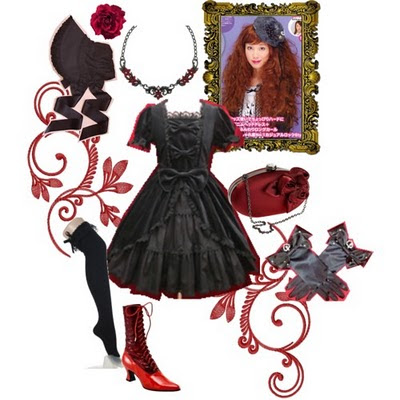 If you're open to some new music, give Rasputina a chance. Their music ranges from hauntingly beautiful to downright silly. Their music has made me laugh, cry, and even dance. If you're interested in hearing the song that inspired this coordinate, check out this video. It's just the song set to someone doodling, as Rasputina really doesn't make too many music videos.
While I love this song to pieces, it doesn't really give a good idea of what Rasputina typically sounds like. If you cringed away from Melora's penchant for fake British accents, give them another chance with My Little Shirtwaist Fire, one of my favorite Rasputina songs.
Posted by caro-chan