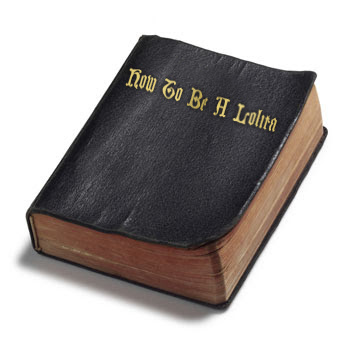 Today's Ask Miss Caro-chan is from someone calling themselves Confused, Confused asks

I assume you are talking about the Lolita Handbook? Which is the only Lolita rulebook I can think of off the top of my head. I'll start off by saying that not everyone follows the "rules", there are always people who break them, some look good breaking the rules, others... well, are living proof of why such rules exist. The Lolita Handbook isn't even really a set of rules, it is a few guidelines and suggestions made so that people just getting into Lolita can have a better understanding of the style.

Some people get too hung up on the fact that others call them "rules" (the handbook doesn't actually use the phrase "rules") and take offense to this, thinking that someone's trying to tell them how to dress, and thus, refuse to listen to common sense suggestions like "wear a petticoat", "Your skirt shouldn't be so short your butt hangs out" and "whiteface looks stupid". You are not "being yourself" just because you are willingly doing the exact opposite of a suggestion, you are still being swayed by the rules just as much as someone who takes the suggestion to heart, you are simply swaying in the opposite direction.

Lolita, as a fashion, doesn't even have too many "rules" beyond basic shape and a variety of aesthetics to choose from, they are not so much rules as simply what Lolita is. Once you start going outside of these vague and generous outlines, you're just not in Lolita territory any more. It's as simple as that. Many other fashion's don't have girls demanding that unrelated things be considered part of the fashion just because they enjoy them both, but Lolita seems to have it's fair share of people like this. It's one thing to take something you enjoy and try to combine it with Lolita, it's another to use the term on whatever you please just because you feel like it. After all, you wouldn't call a medieval gown Rockabilly just because you like both Rockabilly and medieval gowns. Even if you made that gown out of cherry print fabric, it still wouldn't be Rockabilly because it simply isn't.

The guidelines set in the Lolita Handbook are certainly not out-of-date just because the project was started 3 years ago. Sure, some Lolita fads and trends have passed, and some things are now more or less accepted than others, but the Handbook is about the Lolita basics, which, as a non-mainstream fashion, are prone to sticking around much much longer. I do often hear people saying that the Lolita Handbook is out-of-date, and I honestly don't see it. Besides a couple things that could be classified as simply a matter of opinion, it seems pretty spot on to me. If you do feel that the Handbook is out-of-date or just plain wrong, I would be interested in knowing which bits, not to argue with you or anything like that XD I am simply curious which parts of the Handbook people disagree with.

Some people, on both sides of the argument, really need to lighten up about the rules. Some people need to realize that leopard print and sheer blouses are sometimes acceptable in Lolita, and other's need to stop taking fashion guidelines as a personal insult against your freedom to wear whatever you want. It's a silly fashion that follows a variety of different aesthetics, not a science, or an instruction manual for setting up a Blu-Ray player. Try not to worry about it so much.
Posted by caro-chan