Lately, in the Lolita communities, there has been a lot of talk about the olden days of Lolita. The few of us who were familiar with Lolita in the early 2000's have been sighing dreamily of the days when real brand items were a rarity, black and white combos run rampant, huge platforms mary janes were the choice shoe, and rectangular headdresses were often perched atop sausage curled heads. A few months ago there was a post on EGL, comparing and contrasting brand items from the early Gothic & Lolita Bibles with the new ones. I figure I would expand on that a bit, just because it's such a fun look back into our favorite fashion's past!

Instead of one great big long post, I plan to do a few more of these one each of the major brands and a couple on much more general things. Click on the thumbnails for a much larger picture.


Round 1: Baby, The Stars Shine Bright 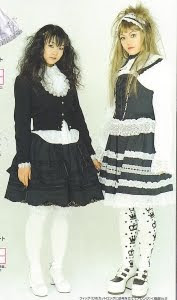 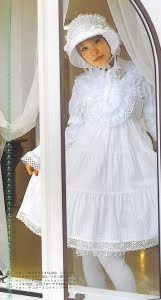 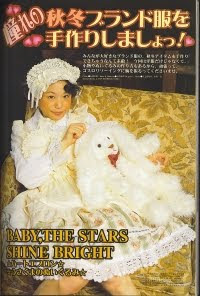 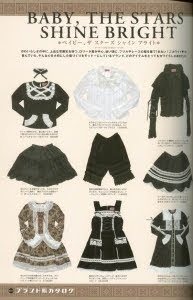 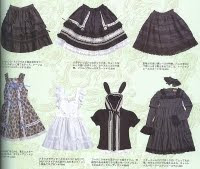 Baby then, volumes 1, 2, and 3
Oh Baby, I just love that picture of the 2 girls, classic old school Lolita! A few things you'll notice about early Baby is the lack of pastels and the multitude of black and white pieces. This early in Lolita, Sweet wasn't quite as we know it today, if you wanted to look sweet and innocent Shiro Lolita was the best way to go, and Baby seemed to be master of Shiro. Just look at those girls up top, they look like perfect Victorian dolls.

Well, I'm trying not to ramble too much in these old school vs. new school entries, as the ones about specific brand tend to speak for themselves. And besides, I don't want to go too off topic into things like the early days of Sweet Lolita, because I would like to do an entry about that alone.
Posted by caro-chan