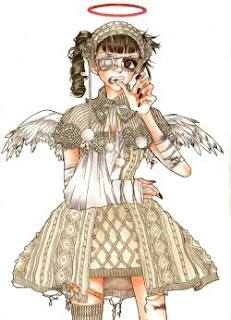 Guro Lolita, or Gurololi is a subcategory of Lolita that focuses less on sweetness or elegance and more on freakish horror. Blood splatters, bandages, eye patches, and fake bruises are all common themes in Guro Lolita. Because of it's costumesque nature, the style isn't really meant to be worn everyday, although I have come across people who consider themselves Guro Lolitas, it's more of a special occasion style. Something to be worn strictly for photo shoots, to meetups or conventions, or when you just want to do something crazy and fun. I'm a really big fan of the Guro style and I've done a really fun Guro photo shoot before, so I'm here to share some advice for anyone looking to try out Guro for themselves. 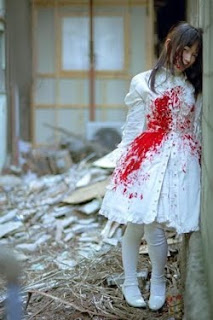 If you do decide to splatter a dress in fake blood, don't skimp on a cheap dress! No, you don't have to destroy your favorite $300 dollar Moitie dress, but don't just buy a $30 satin lace monster mini dress or dig up some white loliable clothes. Either do some hunting on the second hand market for a used white brand dress (you can often find Baby or Meta for well under $100), or try to find something by Bodyline or FanPlusFriend. Remember that you're still wearing Lolita, whether or not you plan on covering it in fake blood. If you wouldn't call the dress Lolita before you splatter it in fake blood, it certainly isn't going to look any better once you do. It's just going to look like a cheap costume. If you're still not willing to "ruin" a dress, go for an apron or pinafore instead.

When you do get to splattering your dress, try not to cover it completely in lots of tiny drizzles. You want your dress to look blood splattered, not like Jackson Pollock did a collaboration with your favorite brand. Instead, try to go for a few large spots of blood, like one large drippy mess on the chest and one on the skirt, with a few random splatters. Don't go overboard and try to fill in every white spot with blood splatters.

For blood, you have three choices: fake blood (either homemade or store bought), fabric dye, or acrylic paint thinned with water. Each of these have their pros and cons.
If you are using paint or dye, don't buy bright red, use dark red instead, the darker the better! Bright red will make the blood look very cartoony or like you are wearing a cheap Halloween costume. Here's a great journal entry about Guroing up a white Bodyline dress. 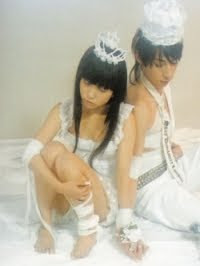 If you don't want to do something so over the top as to splatter a dress in fake blood, but are still interested in Guro Lolita, you can go for the bandaged Lolita look. Instead of looking like a serial killer who has just gone on a rampage, the idea is to look like a broken doll, or maybe like a Lolita who has just fallen down several flights of stairs. The best part of the bandaged Lolita look (or worst, depending on how you look at it!) is that you don't have to cover a dress in blood. You are also not limited to white or lighter colors! You could even do a bandaged Gothic Lolita coordinate, which I think would be really awesome looking. All you really have to do is add some bandages, slings, eye patches, or even fake bruises to yourself and your outfit. The bandages can be blood stained, but they really don't have to be if you just aren't interested in that part of the look. That's really all there is to it for bandaged Lolita! Bandaged Lolitas can tend to look more dreamy and romantic and less horror story, as seen by this beautiful Guro Lolita minus the blood photo shoot.

As I mentioned before, I have come across a few people who call themselves Guro Lolitas. Since these were people I've only come across online, I really have no idea what they could possibly mean by that. Do they constantly wear blood splattered dresses? Or wear eye patches every day? I honestly don't think you can be a full time Guro Lolita any more than you can be a full time Bunny or Strawberry Lolita. These are all various themes that fit into different styles. Heck, even Sailor Lolita can be either Sweet or Gothic, depending on what colors and how you accessorize it. And while you could wear a dress or a blouse with a sailor collar nearly every day, and nautical themed prints every other day, it seems like much to narrow of a category to put yourself into. I think the same applies to Guro Lolita. There are many places out there where you can find Guro themed pieces, but you really wouldn't call yourself a Guro Lolita.

If you are very interested in the Guro style and would like to try to incorporate it into your every day outfits there are a variety of ways to go about it besides buying an all white wardrobe, and covering it in blood. A few brands sell clothes with medical themes. Putumayo often puts out prints of a very grotesque nature, their Splatter House line especially! Blablahospital (pictured above) is a UK based brand often seen in Kera, and all of their pieces are medical inspired. While not a Lolita brand, many of Blablahospital's pieces would look really cool in a Punk Lolita coordinate. h.NAOTO sells a few things that have a bit of a Guro look to them, try giving their Hangry & Angry line a look. Or even try adding some nurse themed pieces to your coordinates, like a white medic bag with a big red cross on it, or jewelry with anatomically correct hearts on it. If you are absolutely determined to add some blood splatters to your everyday outfits, keep it limited to one piece. Like a blood splattered blouse worn under a jacket or cardigan or a blood splattered big floppy tie with an all black outfit. 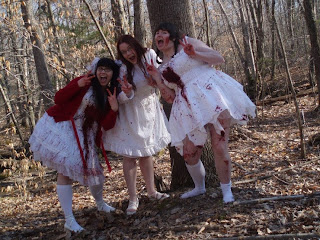 A few months ago a few friends and I got together to do a little Guro shoot. I've mostly uploaded the silly shots, or closeups on bloody hands, but click on the picture above to go to the gallery with some of those shots if you're interested in seeing our take on the Guro theme!
Posted by caro-chan