I told you I wouldn't be able to stay away from talking about BJDs for long! This time I'll be talking about the different places you can get Lolita clothes for ball-jointed dolls. Good Lolita doll clothes are sometimes rather difficult to come by. Most places will sell Lolita inspired clothes, but they are usually a little off, they'll either be too sexy, too J-rocky, or just too damned ita. When shopping for doll clothes, you sometimes have to be willing to spend a lot of money to get something that looks good. Or, at least, a lot of money for something so darned tiny. While the sites I've listed here are not the only places to buy Lolita clothes for ball-jointed dolls, they are some of the better places out there, with higher quality products, and an idea of Lolita that is pretty much spot on with what actual Lolitas wear. 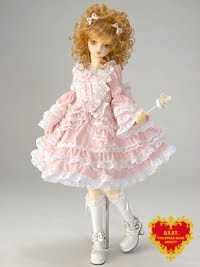 If you want the absolute best for your doll, you're probably going to want to hunt down some official Lolita brand dresses for you doll. Volks will on occasion release limited editions of dolls that come with a Baby, The Stars Shine Bright or h.NAOTO complete outfit, these usually sell for over a thousand dollars. Sometimes they will also release limited sets of clothes, while much cheaper than buying them with a full doll, you can still look to spend about 300 dollars per set. These sets can be pretty difficult to come by, so you're most likely going to have to look on the second hand market for them, and because of that, expect to pay a bit more than their new price, although I have found a few deals on just the dresses alone (they tyically come with shoes and purses and other accessories), and have seen some of them go for less than $200. I'm not actually very well versed on Volks and the things Volks does, and I've had very little desire to spend 300+ bucks on my dolls clothes, so I'm not the best person to ask about these collaberations. Take a quick peek at this list of Volks collaborations with various Lolita brands. 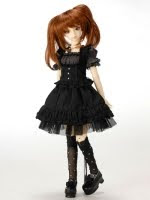 Besides impossible-to-find ultra-expensive brand pieces, Volks puts out their own doll clothes, some of which are Lolita clothes. The quality is usually very nice, comparable to the brand pieces they put out, and is usually a lot easier on the wallet. Volks dresses go for about 50-100 dollars, most of them being about $60. On the second hand market I've picked up several Volks Lolita dresses for $30.

The indies Lolita brand Milky Ange sells doll sized versions of all their clothes. While these are rather easy to pick up, Milky Ange ships to the US and there are always a lot of different styles in stock, they are still rather pricey. Just a little cheaper than their people-sized versions, Milky Ange's doll clothes will cost you between 100-230 dollars, most of which are about $140. 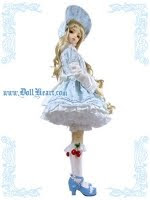 DollHeart is well known for putting out beautifully made, detailed Lolita outfits and shoes. They are usually released in limited quantities available for pre-order only, but they are not difficult to get a hold of at all, it's mostly just the month or two wait that kills me. Their outfits are usually around $100, but are well worth the price as they are usually made up of several pieces, typically a blouse, underskirt, petticoat, overskirt or dress, and accessories, that can be mixed and matched with whatever else you have. 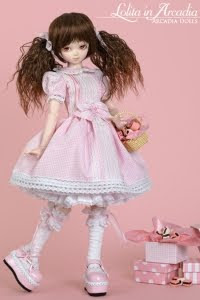 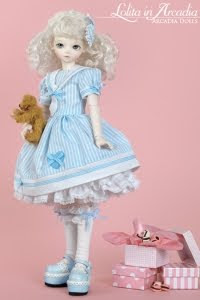 Arcadia Dolls is a shop selling a variety of doll clothes, many of which are Lolita or very Lolita inspired. Their clothes look to be of excellent quality and are priced at around $70 per dress. Sadly, this doesn't include things like bloomers or socks, but some of their designs are just amazing!

Kon'D has a few choice Sweet Lolita dresses. I've never bought from them, but their pieces look to be rather good quality and their designs are just too cute! They are a much cheaper alternative as well, their dresses costing around $50. 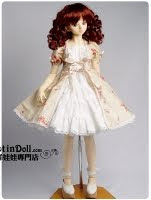 Cotin Doll World is another great place to buy teeny tiny Lolita dresses. Prices range from 60-100 dollars. I've not yet bought from this store, but their pieces do seem wonderfully made and come in a variety of very cute designs. 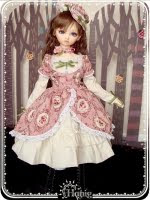 Honig Doll sells a whole lot of incredibly cute Lolita pieces for a really great price, about 35-60 dollars. I've not bought from them personally, but a friend has, and they are all great quality pieces.

Dollmore is a site that sells tons of doll clothes, and scattered around the hundreds of different outfits they sell are a few really great Lolita pieces. Their clothes come from various places, so the prices and quality range quite a bit, from 30-100 dollars. But for the most part you can pick up a really great quality Lolita dress from Dollmore for around $50. You just have to do a lot of hunting for a good dress on their site, because there are quite a few pieces that look okay at first, but are way too short or just not as cute as they looked on first glance.
Posted by caro-chan