Putting some romance in Gothic Lolita

I love the Romantic Goth style, it's so soft and swishy and delicate looking. Dollpart made a post a while back that was a bit of a What Is and How To using Lolita brands as examples, I guess I'm going for the opposite with this post. Instead of trying to go for Romantigoth using brand examples, I'm trying to add some Romantigoth aesthetics into a Lolita coordinate. If you can't tell a Cyber Goth from a Romantigoth, or didn't even know there was a difference, go check out her post, it's a great starter! 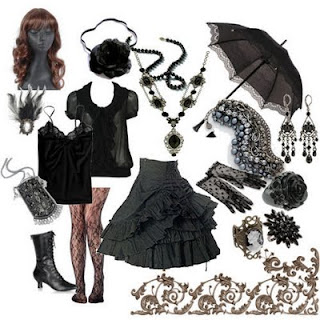 This probably looks like just a regular Gothic Lolita coordinate! But I've done a few different things that I think really give it a Romantic Goth look. I feel like there are a few difference between the two styles that really stand out. Traditional Gothic Lolita is often times very clean cut, it has minimal lace and it's very opaque, favoring cottons or other very solid and sturdy fabrics.