There are a lot of places online that will show you great ways to get started on building a Lolita wardrobe and making the most out of a few key pieces. But most of these tend to focus on sweeter or more colorful styles of Lolita. Starting a Gothic Lolita wardrobe might seem like a very easy task, just buy a lot of black right? But you'll soon probably find yourself bored with wearing the same thing. Besides, there's hardly any wiggle room to experiment with other styles of Lolita, without having to make new purchases, if all you have is a handful of black blouses and black skirts.

Great Gothic Lolita starter pieces
I'm using a lot of Brand items as examples, but don't feel you absolutely need to have brand, off brand is just as good! 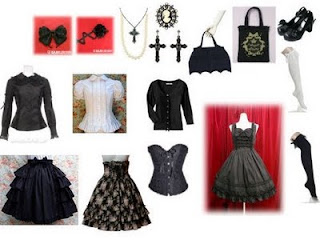 Using these basic Gothic Lolita starter items I've created a few different styles of outfits. Please excuse my sometimes made up Lolita categories, some of these just fall under "Gothic Lolita" but are quite different from each other. 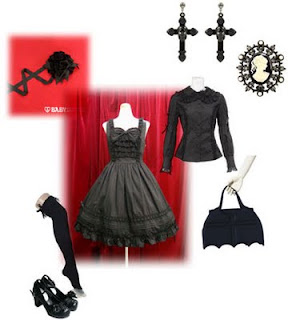 Elegant Gothic Lolita
Using the JSK and black blouse to build a Kuro gothic outfit, I've added a few of the more Gothic accessories to the outfit, such as the round headdress, cross earrings, cameo brooch, and bat bag to keep this outfit from just being Sweet Lolita in black.
~ ~ ~ ~ ~ ~ ~ ~ ~ ~ 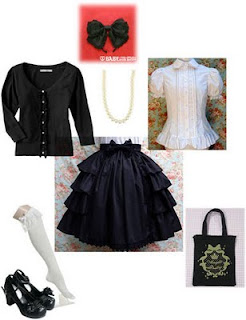 Cute Gothic Lolita
Personally, I don't agree when people refer to black and white Lolita outfits as "Gothic Lolita". I see them as almost their own category. I always want to call such coordinates "Classic Lolita" in reference to the fact that so many years ago, when Lolita first got started in the West, black and white were the color coordinate to wear. Nowadays, black and white is sometimes seen as a "beginner Lolita" color scheme, but I think it can still look very cute when you remember to keep the black and white separate. No black dresses with white lace, but rather all black pieces combined with all white pieces. This coordinate could almost be considered sweet if you were to replace the black with a pastel color, but because they're in black, I think they manage to look much more toned down and refined.
~ ~ ~ ~ ~ ~ ~ ~ ~ ~ 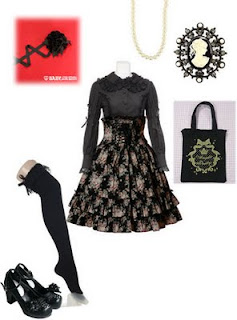 Classic Lolita
Provided you managed to hunt down a floral print black skirt, and not a puppy or bunny covered print in black, you can create a lovely Classic Lolita coordinate with your starter pieces. To beat any cuteness into submission with a more refined style, use a few of the more elegant accessories, like a round head piece, pearls, and a cameo. I've used the tote bag, just because it had a fancy gold foil print, but if you have a tote bag with a cuter print on it, stick with the purse.
~ ~ ~ ~ ~ ~ ~ ~ ~ ~ 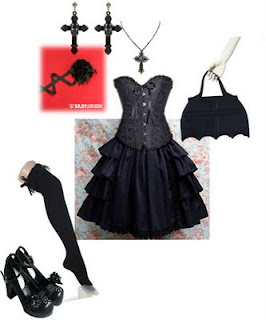 Ero Lolita
Or, possibly, Uber-Gothic Lolita, depending on the type of Gothic top you are using XD. I'm using a corset and no kind of cover up, so it gives it a very burlesque and Ero feel to it. This look may end up looking more Gothic with a Lolita shape and less pure Lolita, but if you know what you're doing, it's still going to look awesome.
~ ~ ~ ~ ~ ~ ~ ~ ~ ~ 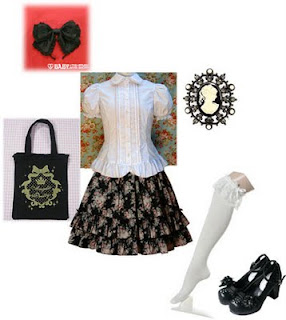 Sweet Lolita
Or almost Sweet Lolita. The floral print on the skirt is still going to look very Classic, but if you add a white blouse, white socks, a cuter head piece, and a less formal purse it's going to start looking very Sweet. If you know you love Gothic Lolita, and just feel more comfortable wearing black over pastels, this is going to be a very easy way to either build up the courage to wear an Angelic Pretty Pastel Monstrosity, or to just flirt with the sweeter edge of Gothic Lolita without being limited to plain black and white.
~ ~ ~ ~ ~ ~ ~ ~ ~ ~ 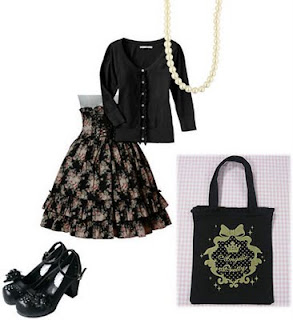 Casual Lolita
I really love this skirt! Can't you tell? If you want to try out Casual Lolita, without just looking like a deflated Gothic Lolita, this print skirt is going to come in handy! Pair it with the buttoned up cardigan, a casual tote, pearls. Exchange the socks for a pair of plain tights and leave the head bow at home and do something very simple with your hair, like a pair of braids. Also be sure to wear a less poofy petticoat. The cupcakey poofy look isn't for casual, but by all means don't forget to wear a petticoat! Just wear a simple tulle pannier to give your skirt a little bit of a poof.

Of course these aren't the only outfits you can create with a few skirts and blouses, but just some of the different Lolita styles you can manage to squeeze out of them. I hope you found this helpful, whether you are new to Lolita in general and looking to start up your own wardrobe, or even a Sweet Lolita veteran who's been thinking of coming over to the darker side of Lolita.
Posted by caro-chan