What ever happened to detachable collars?

I'm not talking about an OP with a detachable collar, I'm talking about a lone little collar, sold all by itself, meant to be paired up with a cute Lolitay tee. Detachable collars were a fad that never quite hit Lolita. Gone the way of the rectangle headdress, the stripper mary janes, and the black and white stripy socks before they even got a chance to stick around. I first discovered them while browsing through Gothic & Lolita Bible scans online years ago. I instantly fell in love. How versatile! I thought. How quickly you could turn a cute but plain tee shirt into a cutsew. 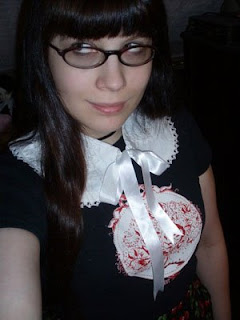 My earliest sewing machine adventures involved making a detachable collar. Then, later, Candy Violet sold them briefly. I picked up a white one quick enough (modeled by me on the right, with a Candy Violet tee). Of course, I've never really worn it. I'm just no good at casual Lolita. I never wear tee shirts outside of Lolita, so why should I dress down to dress up? But I've held onto this useless piece of fashion all these years, along with a few Lolita print tees, just waiting for the rare chance to wear them. But despite my inability to wear a goddamned tee shirt, I can't see what's holding anyone else back from wearing detachable collars.

There's been a big surge in casual Lolita in the past couple years, why haven't I seen any ruffly white collars around people's necks? Perched on top of their quirky print tees? Maybe they have been there all along, and despite my love of the damned collar I suffer from some kind of blindness towards it. Not only can I think of a damned thing to do with it, I just don't see it when it's right in front of my face, being as cute as it can be. Maybe people just don't know about these little pieces of instant Lolitafication. Or maybe, they look stupid and I just am too stubborn to let them go. 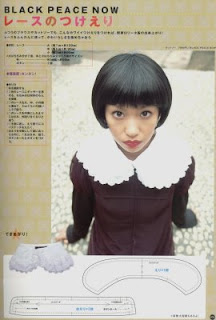 Here's a scan from one of the early Bibles with a detachable collar pattern. Click for a much larger version. Try it out sometime. It's cheap, easy, and you might even like it.
Posted by caro-chan