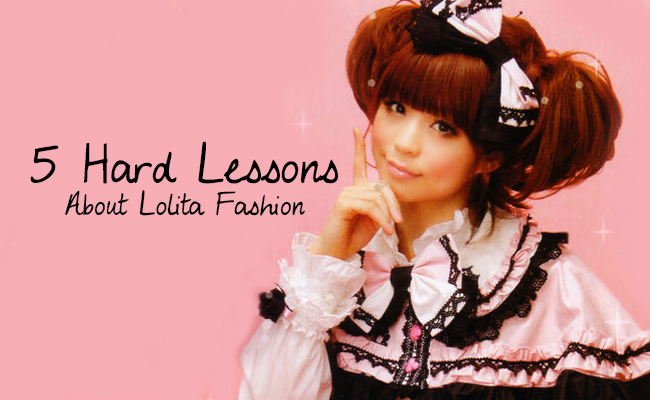 It's no secret that being a Lolita isn't all kittens and rainbows. Wearing Lolita isn't going to fix all your problems, and mingling with other Lolitas doesn't mean you're going to be welcome with open arms into a completely accepting sisterhood. Just like nearly anything you do in life, Lolita has its ups and downs, and today, let's look at a few of the downs that tend to sweep by and take even the most hardened Lolitas by surprise sometimes. Consider this something of a 5 things I wish someone had warned me about list!


You can't wear Lolita all the time
I know that a lot of people who start in the fashion imagine a life where they can wear nothing but Lolita and live the Momoko lifestyle they have been dreaming of, but it's probably just not going to happen. While there are plenty of opportunities to wear Lolita, and even more to Lolify a little bit of your life, it's just not something you can cram into every nook and cranny of your day to day life.

A question I get a lot from people looking to take their Lolita to the next level is "How do you wear Lolita to work/school/fancy events/etc?" expecting that other Lolitas have figured out some sort of neat trick they just haven't thought of that is going to make this work, and the truth is simply that there are going to be times when you simply cannot wear Lolita. And in all honesty, it's really not that big of a deal.

You're no less of a Lolita because your job or school wont let you dress however you want, or because sometimes you have to put on some normal clothes, or other times it's simply too hot or too cold or you're too lazy to bother with all those petticoats.

Ultimately, Lolita clothes are just, well, clothes. And anyone can wear them. Lolita fashion attracts a very wide variety of people, some are going to mesh with you, and some simply are not. I feel like a lot of newcomers to the fashion come in with the attitude that everyone else who wears Lolita is going to instantly like them and agree with them and like the same things they like, and when they are shocked to find out that other Lolitas are just regular people, they write off the possibility of being friends with other Lolitas as a hopeless cause. "Hardly anyone talked to me! I felt so left out!" is all too often the cry of someone upon coming back from their first Lolita meetup.

Lolita fashion is a great common interest to have with people, but just like in any other situation, sometimes you're going to have to put in the effort into making lasting friendships with other people.


You're not going to be able to wear every dress you fall in love with
I feel like this is a hard lesson that some people sort of never get over! There are so many amazing dresses released by brands, both big and indie alike, it's honestly hard not to love them all. But sometimes it's just something that's not meant to be.

Maybe the dress is incredibly rare, is out of your price range, out of your size range, or simply doesn't look the way you hoped it did when worn. Sometimes you just have to let it go and learn to love a dress without owning it. Trust me, your wallet and closet space will thank you for learning this lesson!

There will be unexpected things you're probably going to have to buy
This is a lesson I'm learning all the time! Try as I might I feel like I am all too often having to buy something really unexciting that I absolutely need in order to wear something that I'm just dying to get the chance to coordinate. I might want to spend all my money on the dress of my dreams that pops up on auction, or some exciting new release, but what I really need is a new petticoat and a pair of comfortable black walking shoes. Oh, and dry cleaning, and some plain colored tights, and a plain button up in cream, and a plain underskirt in just the right shade of brown, and I think you get my point!

It's fun to get swept up in wanting new main pieces, but there are so many basics that you need too. Especially if you wear the fashion on a regular basis and you wear some pieces so much that you get the chance to actually wear them out and probably have to toss them in the trash. I don't even want to think about how many pairs of tea party shoes I've had to throw away simply because they were just too worn out!


It's going to take some hard work to get what you want
Many new Lolitas seem to think that people who've been wearing the fashion for a while all know some sort of magic trick to make things easier when it comes to finding just the right piece, in just the right size, for just the right price. The hard truth of the matter is that there is no trick, most of us who wear Lolita who have pretty much any sort of budget at all or fall anywhere outside of the standard size put in a lot of time and effort into building our wardrobes. We hunt and we lurk and we plan and we save!

The best "magic trick" I can teach you would be to lurk more! Lurk everywhere and try to learn about everything! If you're interested in a particular style, learn who makes it, what sort of prices they go for, and what sort of hoops you should be jumping through to buy them. If you want to learn how to do something just like the pros, who make it all seem so natural and easy (be it posing like a kawaii princess or sewing beautiful dresses!) you're going to have to practice and you're probably going to make a lot of mistakes along the way.

As many Lolitas will tell you, these little annoyances are definitely worth it for what the Lolita fashion gives back to them! For all the hours of lurking and learning, the reward is snagging your long sought after dream dress after all those years for a good price. For every handful of random Lolitas who you've met but neither of you are ever going to even remember each other names, there's going to a genuine friend.

What sort of hard lessons have you learned in the fashion that maybe you wish someone had prepared you for before hand?
Posted by caro-chan