What It Takes To Be the Best Lolita You Can Be, According To The Gothic & Lolita Bible!

While digging through some pictures from the Gothic & Lolita Bibles, I came across this little comic. Of course, it was in Japanese originally, but I was intrigued and a bit confused by what was going on! I asked if anyone had translated this because I was quite curious what that owl was tormenting those girls for and Tanpoponoko came to the rescue and translated it! I simply edited her translations into the original comic for reading ease. If clicking it doesn't bring up a bigger picture (because sometimes blogger does weird things to images!) click here for a larger version! 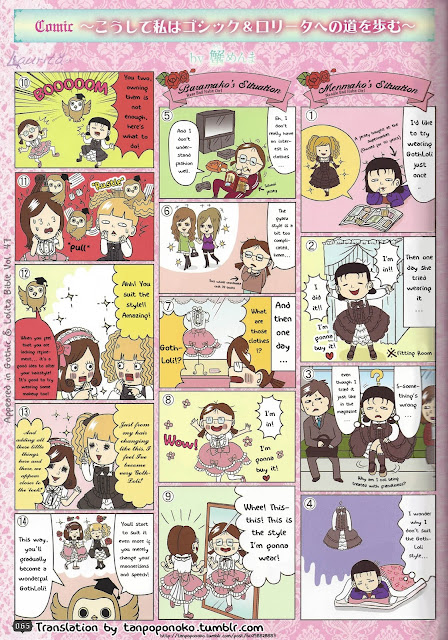 Before I say what I want to say, check out the comic by clicking for a larger version (or alternatively, check out Tanpoponoko's text translation here).

I found this comic neat because it's a bit of a controversial topic in the Western Lolita circles, especially the bit about adjusting how you act and speak to be a better Lolita! Does that necessarily mean this is bad advice, even outside of the cultural context of Japan? I'm going to maybe be a little controversial in my own opinion and say "No, this is not actually that bad of advice!".

Generally in the West, it's regarded that owning Lolita clothes is all it takes to be a Lolita, and this isn't exactly untrue. It is definitely the biggest hurdle in becoming a Lolita, and you just can't be one without them, but to become a great Lolita it might take a little more than simply plopping a dress down over your head. While it's generally considered that changing the way you act and dress while in Lolita annoys people and makes it seem more of a costume than a fashion, it's not a bad suggestion to polish your look with a nice hair style and some simple learning how to move elegantly in a fluffy skirt.

You don't have to turn yourself into a perfectly made up and coiffed doll to wear Lolita, but a little bit of polishing in the form of some nice coordination, a good hairstyle, very basic mascara-and-lipgloss makeup, and learning how to move in a fluffy skirt without covering everything around you in your petticoat an simultaneously flashing everyone is never a bad thing! If you're looking for some very basic things you can do to make your Lolita look the best it can be, learn to perfect those things!
Posted by caro-chan