Lolita52: How Lolita Has Changed Me

I've already managed to slide into laziness with the Lolita 52 meme and get my second question in on what is technically the last day of the 2nd week! However, I'm excited to see that the other bloggers that are participating in this meme aren't being as lazy as I am and I'm really enjoying seeing the topics pop up on blogs.

This week's prompt out of the jar-o-questions is "How Lolita has changed me". Questions similar to this end up on a lot of Lolita memes and questionnaires, but usually they're in the form of "How have you changed since you first discovered Lolita". Personally, it's been a long time since I discovered Lolita, so that's a pretty difficult question to answer. This way, I thought it was a little more direct. 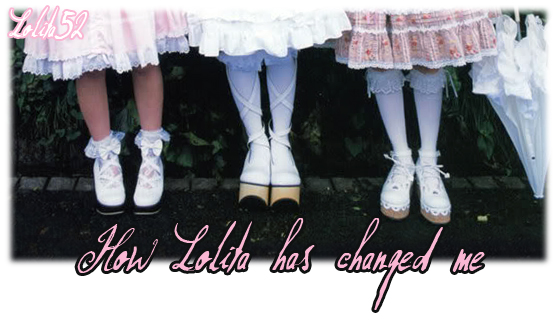 
Shopping
The most major change Lolita has done to me is the way I shop! I no longer really feel the need to pick up random items for a cheap price just because. Since I got heavily into Lolita my major concern when adding items to my wardrobe is "Can I wear this with my Lolita wardrobe?" and "If I'm buying this now, is it going to prevent my from buying Lolita later?" If the answer is "No I can't wear this with my current Lolita wardrobe, and if I get it I wont be able to get Lolita later" there's a 95% chance I'll put it back. I make very few non-Lolita related "I want this just to have it" purchases now.

Does that mean Lolita saves me money? Haha, oh gosh no. That just means I save all those gotta have it, don't know what to do with it purchases for when I'm lurking the sales communities.


Crafting
I love doing various crafts and Lolita has definitely changed the way I craft. While I've obviously picked up a ton of new crafts because they help me add things to my Lolita wardrobe, there are adversely a number of crafts that I think are cool, but will most likely never end up bothering with because they're not Lolita crafts. Now, this isn't to say I have some sort of weird Lifestyle Lolita urge to only do Lolita appropriate historically accurate crafts, just that they're things that look neat to do, but I can't figure out any way to make them produce things for my Lolita wardrobe.

I recently discovered Random Tutorial Generator, a site that lets you press a button to get a new random craft tutorial. This is such a cool site and it shows you so many awesome tutorials you may have never found (and also a really obnoxious amount of baby related tutorials. I am pretty thankful that I don't need to know how to make cloth diapers or whatever a burpee is, but pretty annoyed that sometimes I have to press that big red button close to a dozen times before it decides to stop it's romp through babyland) and I love to spend a good chunk of time just clicking around to find new ones. However, every time something like, say, a spiked friendship bracelet pops up, I get super excited because it looks so fun to make and I have all the supplies, but oh, wait, when am I ever going to wear a spiked friendship bracelet? Never, because they totally clash with my grandma couch floral print dresses.

Lolita has also definitely changed the friends I have and how I make them! I can't even imagine how weird getting together, and in some cases traveling pretty far, to hang out with people you have never met before to talk about clothes would be outside of Lolita. I was looking through my phone's contacts for something the other day and it struck me how many people I have in my phone that includes their internet handle because that's what I know them by most of all!

Through Lolita I have made a ton of great friends, and the social nature of Lolita often pushes me to go out and do something social when I would otherwise just be hanging around avoiding doing social things. Even just in online communities, where I am typically inclined to just lurk, I'm now more willing to actively participate because of the positive experiences I've had in online Lolita communities.

What about the rest of you? In what sort of specific ways has Lolita changed yourself? Do you find that Lolita just so happens to line up perfectly with your own personality and habits, or has it changed you for the better, or perhaps even the worse?

For those of you who want to check out the other topics in this weekly meme, check out the original post on it, or keep an eye on the Lolita 52 tag!
Posted by caro-chan