Trends of the Past: Camouflage Lolita?

Cruella De Vil wigs, mismatched socks, pastry hats, applying your false eyelashes about halfway down your face... Lolita definitely has it's fair share of odd trends that come and go with the times, but I think that one of the weirdest and most inexplicable ones to hit the fashion was the trend of Camouflage Lolita, from back in the old school days. Yes, that's right, quite possibly the least elegant thing in the world managed to become a Lolita trend, albeit not a very widespread one.

I'm honestly not sure how this happened, it probably happened with a somewhat strange Angelic Pretty collaboration in 2005 with the Jrock band Psycho le Cemu, in which they designed this set, complete with old school giant ruffly headdress, for the musician Aya. 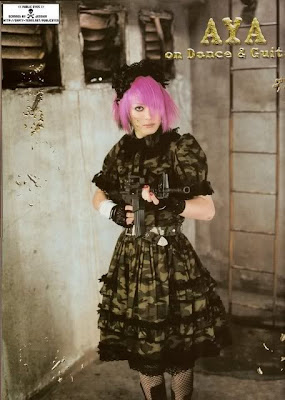 The elegance! The mystery! The crossdressing!
This was not a one-off, a just-for-Aya-to-dance-around-in costume, but something actually released by Angelic Pretty. Believe it or not, Aya was something of a Lolita idol, a pink-haired second-rate Mana, who often appeared in the Gothic & Lolita Bibles, usually wearing, or doing, something questionable. I am particularly fond of a picture of him posing with a vacuum cleaner, pretending to be some sort of Punk Lolita housewife, and one sort of awkward Wizard of Oz photo shoot that involved drawings of bishounen Scarecrow. I honestly have no idea what ever happened to Aya, I seem to recall some sort of brief career as a Halloween themed costumed rock star, but for whatever reason, he seems to have slipped from the pages of the Bibles, and from the Lolita timeline. 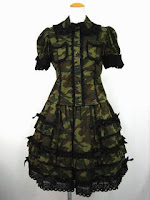 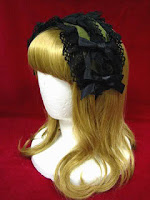 Angelic Pretty's stock photos for this set.
When most people even recall that camo-print Lolita was even a thing, they usually think back to Metamorphose's Punkma Camouflage set released a year later, in 2006. After all, Meta tends to be the odd ball in the Lolita world, no one would have really expected Angelic Pretty to make something like this, it seems to have Meta's shenanigans all over it. Maybe Meta didn't invent camo-loli, but they certainly jumped all over that bandwagon with Punkma and released a surprisingly large amount of pieces, in a wide range of styles, in their particular brand of camo-print, which featured cute silhouettes of their bunny and bear mascots. 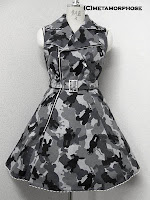 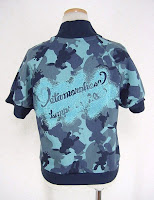 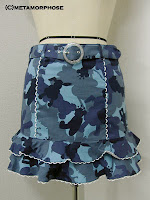 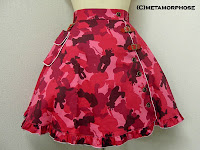 Believe it or not, there are actually a few more pieces in this series!
While this is Meta's most famous camo-print line, it certainly wasn't their first! Before this bunny and bear covered camo-print came a more generic print set. As far as I know, it came in grey and pink, had 2 different styles of skirt, and a heart-shaped apron. At least, these are the only pieces of it I have ever seen online. 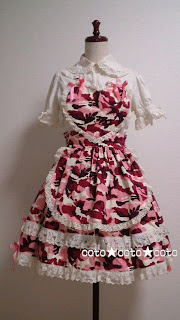 A couple pieces from the original Meta camo-print set, complete with matching heart-shaped apron. Because just a camo Lolita skirt is never enough.
Did it come before the Psycho le Cemu Angelic Pretty set? Did Metamorphose, in fact, invent such a thing as Camouflage Lolita? Honestly, I have no idea, as there is very little information about Meta's first camo series online. All I know is that, just like all the other camo-print Lolita pieces that have released, it is pretty awesome, for it's equal parts of badass and tackiness. I actually used to own one of the pink skirts from this set! I loved it for it's tackiness, but never quite knew how to wear it so, regrettably, I sold it. I would probably pick it up in a heart-beat if I saw it for sale again, that is, if it was for the $35 that I paid for it and had been making the rounds through the second hand Lolita community for.

Sometime last week I was tweeting around Twitter and was conversing* with a fellow old school Lolita/fashion-in-questionable-taste fan about the old camo-loli and wondered if this weird trend could ever get revived for current generations of Lolita fans. Conclusion: probably not, but wouldn't it be wacky if it did? So, I coaxed some life out of my dying Wacom tablet and doodled up what I thought a print would look like this trend happened today in Lolita. 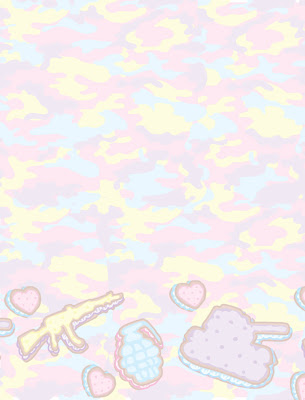 Awful? More like AWESOME-FULL.
First thing to change, from the old style, would definitely be the colors, they're just too bold and monochromatic for the modern Lolita. Drawing inspiration from Angelic Pretty, I made a pallet of all the pastel colors I could think of (Which is apparently just four colors...) and made a big pastel mess of a camouflage print. If you squint your eyes and think about bunny rabbits, it sort of looks like what a lot of relatively recent Angelic Pretty prints look like to me. But, still, it was too plain. All-over prints are so Baby the Stars Shine Bright, and that's just not what we were going for. Knowing that Lolitas can't ever get enough of irony (Guro Lolita, anyone?) we decided to bust out the big guns. The big cookie guns, covered in frosting, and made into a frosting sandwich, that is. And some grenades and tanks and hearts for good measure too.

My tablet managed to give out on me while I was trying to draw up some outfits with this print, which is a shame, because they were actually really fun looking, if a bit completely an utterly silly. They involved hats shaped like tank cookies and machine gun cookie purses. And the dress came in 2 styles, typical Angelic Pretty OP, and a more Fairy Kei styled empire waist mini-dress with matching bloomers. I think I hear Maki and Asuka knocking on my door now, just begging me to fly to Japan and design dresses for them now!

That's about the short-lived and weird trend of Camouflage Lolita in a nutshell. What do you think about it? Did you not even know about this skeleton buried deep within the Lolita closet? Or maybe you were actually a fan of it at one time? When I first started buying Lolita pieces, this style was in full-swing, well, as full of a swing as it ever was, and I was a bit baffled by it, this manly and inelegant print, so out of place in a time when nearly all Lolita prints were classical and elegant florals, but I enjoyed it for it's silly irony, and I still do. When I hear people complain about some new trend being un-Lolitalike, or someone not considering something part of the Lolita fashion just because it doesn't follow their idea of elegance, I tend to think back to these camo-printed pieces and wonder how they would react if they knew that brands used to put out pieces like this.


*the following story is a bit over dramatized, the conversation basically went Her: "Remember Meta's camo print?" Me:"OMG LOVED IT! It should come back in OTT!" Her: "OMG WITH COOKIE GUNS" Me: "I'M GONNA DRAW IT!" But that's not very fun to read, or write about.
Posted by caro-chan