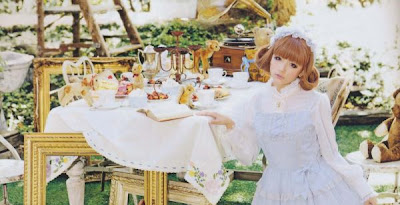 This Saturday I had the chance to hit up a local convention and get together with some of the local Lolitas that I haven't seen in a few months and catch up as well as getting a chance to meet some Lolitas I have never seen before. Even though I'm sometimes the hermit of my local Lolita community I really do love my local Lolita scene, it's full of fun people who like to do fun things while dressed fabulously, I really do regret that I cannot make every single meetup and casual get together in frills that our small state happens to have!

I do realize that not everyone is lucky enough to live in an area that has a large and friendly Lolita scene, but I do feel that there are enough Lolitas out there that pretty much no matter where you live there is at least someone else familiar with the fashion near you, sometimes it just takes a little hunting!


So, how do you find local Lolitas?
The Western Lolita scene mostly revolves around the internet, since we Lolitas are few and far between in the real world. EGL on Livejournal is one of the biggest English speaking Lolita communities on the internet, and you can find many offshoot communities on Livejournal, including communities for Local areas. So if you're looking for a place where Lolitas in your area might congregate online, scan the list of other communities to see if your area has a group of it's own. There are also a few Lolita forums sprinkled throughout the internet such as Dressed to a Tea and the My Asian Fashion forums.


Suggestions to liven up a dead community
So, you found you already have a local online community for Lolitas in your area, but, to your dismay, no one has bothered posting in it for the better half of a year (or more!). Don't despair, this doesn't necessarily mean that all the Lolitas in your area have just vanished off the face of the earth, it might easily be that they don't all know about this community or that everyone else is sitting around watching the dead community thinking the same thing as you, just waiting for someone to say something. So, what can you do to help bring some life into a dead Lolita community?
Finding Lolitas at conventions
If you frequent anime conventions, you'll find that one of the easiest places to meet new Lolitas is at local (or non-local, if you like to travel!) conventions. Pretty much all you have to do is keep your eyes open and you're bound to come across one or another. If you're a bit shy about going up to strangers and saying hi just because you're wearing the same kind of clothes as them, consider going in Lolita if you weren't already, and they will easily come to you! An easy way of letting people know "Hey, you're a Lolita, I'm a Lolita, let's be friends!" is to whip up a batch of calling cards (I happen to love mini moo cards! They're such a unique size and shape!) with your Livejournal, Twitter, Blogger, or even Tumblr username so people can get in touch with you. Simply slip them a small cute card when you meet them or when you say goodbye.
Anime conventions often have Lolita panels or even hosted tea parties which act as a great way of getting a group of Lolitas to all gather in one place. If the convention you plan on going to lacks either of these, consider making a post on the convention forums asking if any Lolitas will be attending and host a very small, casual get-together at a convenient time and place inside the convention center. Something as simple as "Hey! Let's all meet at the couches near the cafe at 3 on Saturday!" is usually all it takes to host a small and casual meetup at an anime convention.
Some quick Lolita meetup tips and ideas.
Hosting a Lolita meetup on your own can be a big task, sometimes trying to get a group of Lolitas in the same place is as difficult as trying to herd cats. Your best bet would be to ask around your local community and see what it is they are all interested in doing, try to take their opinions into consideration. A local group that is mostly vegetarians and vegans probably isn't going to be interested in a meet at a steak house, locals who aren't fabulously wealthy probably aren't going to be able to go on a week long Disney cruise, and a group of Lolitas who are fancy ladies probably aren't going to want to go to a meetup that involves moshing at a concert. Try to find a meetup location that is either in a centralized area or is easily reached by public transportation. For example, myself and several other Lolitas in my state find it easier to take a train all the way to New York City for events than it would be attend a meetup that is geographically closer in my own state that happens to be in the middle of nowhere.
There are a lot of different places to host a Lolita meeup, all meetups don't have to happen at a fancy tea house or some other "traditionally" Lolita location. Consider any place you like to spend time at as a possible meetup location, it can be anything from a gallery or museum to dinner and a movie to a picnic in a park. You should also try to calculate how much any meetup is going to cost, including transportation costs, admission, food, and extra spending money, and let everyone who is interested in attending how much the meetup could potentially cost beforehand. No one likes to get somewhere to find out that they don't have enough money to afford it! If you're looking for meetups that are a bit on the cheap, that don't involve living near amazingly fun and interesting places, consider one of the following ideas:


For a bit more of an in-depth how-to on how to host, and even attend, Lolita meetups, check out these two posts, this one on EGL (it's an old post but it's still very relevant!) and this one on Lolita Fashion. They both contain great information on everything from meetup ideas to what to wear! If you feel as if you are very shy and might be uncomfortable at a meetup, but you're very interested in going to one, check out this post by Her Curious Elegance with tips for the shy Lolita.


Keeping the community strong
Even though I was terribly shy when I first started going to Lolita meetups, I found a few of my best friends by not letting shyness get in my way and just going to the local meetups, why else would it be called a meetup if you weren't there to meet new people? It's not called a Lolita stand-around-and-stare-at-each-other. One of the most important parts of building a strong Lolita community is keeping up with everyone and forming genuine friendships, not just saying "Bye, see you at next year's Lolita meet!" and going on with your life. If you have a somewhat active online community, join in with the conversation between meetups, talk to people on instant messenger, and just generally be friendly with them. Of course, if you don't click with the people in your local group, for whatever reason, you don't have to force it. But if you do attend a Lolita meetup in your area or two and decide that these are your kind of people, there is no reason that they have to be people you only see a couple times a year at meetups.

Your local Lolita community might not be perfect, you don't have to be best friends with everyone in a petticoat who sits down to have tea with you, but so what? Even if the only thing in common you have with some people is you happen to wear the same fluffy undergarments and buy your socks from the same brand I still think that's something special, even if just because we Lolitas are such a rare breed. After all these years I still get excited when someone else even knows what Lolita is, not to mention has the guts to wear it. At the convention I went to over the weekend Christina of Ramble Rori hosted a Lolita panel and said something to this effect, about how excited she is to meet other Lolitas too, Lolitas of any experience or dedication level. "Oh my God, yes! You know what this is all about too!"and I really feel the exact same way, like meeting another Lolita is like finding someone else who is in the know about this wonderful, sometimes secret or misunderstood, world or frills and elegance, and fabulousness.
Posted by caro-chan